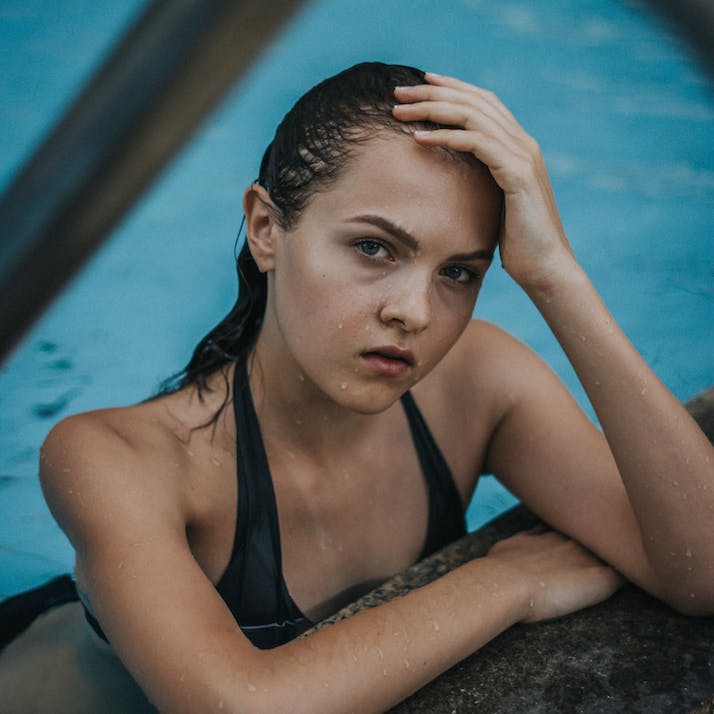 My High School Swimming Experience Was Marred By Sexual Misconduct

I was too young to understand the inappropriate behavior my swim coach directed toward me every day.

In 2004, I was 14 years old, a freshman in high school with a newfound interest in competitive swimming. My swim coach was a young smooth-talker who all the girls on the team lusted after. My friends and I thought I was lucky because he clearly liked me more than the other girls. He used to tell me I was the prettiest girl in school. He was notorious for being inappropriate with the girls’ team.

What I didn’t realize until much later was how inappropriate our relationship actually was.

He made me feel special, but not in the way a great coach makes you feel special for winning first place or working hard, although I did both. This was a completely different feeling. I would feel butterflies in my stomach when he told me I looked sexy in my new Abercrombie & Fitch skirt, or when he’d ask me to roll his sleeves up for him. I was always happy to be singled out to do small tasks for him, like hold his Mountain Dew while he addressed the team during warm-ups, or help him pick out the team’s new swimsuits. He let me know all the styles that would look hot on me.

In Swimming I Found My Calling—and Something Unexpected

It all started when I was in eighth grade. One of my favorite teachers had suggested I try swimming as a competitive sport. I was just coming into my body then; I was long and lean, which is usually a good physique for a swimmer. His wife was a math teacher who was involved with the swim team at the high school I would be attending the next year. I’d already played middle-school soccer, so I was a bit apprehensive to try something completely out of my athletic element. But I really looked up to this particular teacher. He was a very positive role model, kind and caring to all his students. I was also dating his son, who was already a swimmer. So when he suggested I try swimming, I was interested.

I joined the recreational league over the transitional summer between middle and high school. That’s where I met him. Tall, slim, sandy blond hair, bright green eyes and very tan: a surfer-boy type with earrings in both ears and always in board shorts. I wasn’t a great swimmer at first—no one is. The coach told me I was a natural, though, with tons of potential, and I believed everything he said. He would work with me very—and I mean very—closely. One day he brought a digital camera to the pool deck to take pictures of me, mostly close-ups of my face. When he showed me the pictures he held the camera in one hand and put his other hand around my waist, pulling me into his side. He scrolled through the shots one by one, telling me how gorgeous and photogenic I was.

I wasn’t worried about tryouts or making the team that year, since I had swum in the rec league all summer and gotten so close to him. I made the varsity team, which isn’t the easiest thing to do as a freshman. I had very good times for someone so young and who had just started swimming. When I clocked 28 seconds in the 50-meter freestyle, I was elated. I had found my calling.

My Swim Coach Made Me Feel Special

Things happened quickly from there: new school, new rules, new teachers and principals. Our swim coach was also a math teacher at our high school. He resided in a trailer classroom way out in the far back corner of the school. I started to realize that being on the swim team had its special privileges. If I was late to class, I’d go to his classroom and have him sign my hall pass. It was filled out front and back with only his initials. If I wanted to leave class early, he’d write me a note to be excused for very important swim team business. If I didn’t feel like going to class at all, I was allowed to skip and hang out in his classroom instead. He would joke that I was a badass freshman and we ran the school together.

He did this for most of the girls on our team, but it was apparent to everyone that I was his favorite. He made up a nickname just for me, and that’s what everyone on the team called me. If I ever got detention, he would sign the slip, saying I had served it by picking up trash before school. Really, I was just hanging out in his classroom, sitting in his chair behind his desk—which no one else was allowed to do. At the end-of-season swim team banquet, he gave out a “Coach’s Award.” Before he named the recipient, he gave a speech praising how wonderful this person was, how proud of her he was and how much she had grown into a beautiful young woman before his eyes. I knew he was talking about me before he even said my name. Everyone did. Our relationship was closer than any of the other students or swimmers.

What might have seemed innocent to everyone else most definitely wasn’t when we were alone. In between classes, before or after school, or anytime there was no one in the classroom, he would pull me from behind and lead my hips to sit in his lap. He would slide his hand over my lower back, massage my shoulders, grab and hold my hands in his, play with my hair—any sort of flirtatious touching, he did it. He would even do this in front of other students, seemingly to make them jealous, because he knew all the girls had a crush on him.

“”
What might have seemed innocent to everyone else most definitely wasn’t when we were alone.

He Exploited Our Coach-Athlete Relationship

Things only escalated from there. I was raised by a single mom of three, and at the time, my baby brother was only one year old. She was doing her very best, but sometimes would have to drop me off early at practice or pick me up late. Oftentimes I would be the last one to be picked up, and the coach isn’t allowed to leave anyone at the pool alone. So we’d wait in the pool office talking, laughing, leaning on each other. Or we would practice on my dives. He would stand directly behind me as I bent over on the block, and adjust my hips, legs or arms accordingly.

One day it was taking my mom particularly long to pick me up. I was messing around on my new phone and he asked to hear my outgoing voicemail message. He decided it was no good, and that we needed to fix it. For about a year after that, if you called my voicemail you would hear his voice: “Hey! This is [insert coach’s name]. Sorry [insert nickname he made up for me] can’t get to the phone right now. Leave her a message and she’ll call you back!” Everyone at my school who heard the message thought it was the coolest thing.

When it wasn’t swim season I also played soccer and water polo. Practice was always right after school, so I had a huge bag with a change of clothes, cleats, swimsuit, water bottle and other things inside. He told me to leave my bag in his room so I didn’t have to carry it around all day. He said he liked to see me when I dropped it off in the morning and picked it up after school. He made it very obvious that he was going through my bag and looking through my clothes. He made a comment once about how sexy my thong was, and how I must drive the boys wild.

At 14 years old, I was adjusting to puberty and all the feelings that came with it. I couldn’t tell you why I didn’t say anything to anyone at the time. It was probably because it felt good to be paid attention to by someone your peers thought was cool and good-looking. Years later, I realized how much my coach took advantage of that. The inappropriate comments and touching—all of it was flat-out wrong. He was twice my age, and I was just a kid. Not to mention he was supposed to be my mentor, someone I should trust, an authority figure to be respected.

After my freshman year, he moved on to work at another high school down the road. He sent out letters to all the parents explaining how much the team had meant to him but that it was time for him to move onto bigger things.

He told me he would miss me the most.

He Kept Up the Pattern, and It Finally Caught Up with Him

At his new high school, he taught math and coached the swim team for 15 years. Our area’s high school athletic association awarded him Coach of the Year three times, and a local newspaper named him all-area coach of the year four times. My friends and I heard rumors from students at his new school that he was sleeping with girls on the swim team, and that he would go to house parties and hook up with students. We weren’t shocked. In fact, no one I knew was even really surprised. It seemed like the logical next step for someone like him.

In 2018, someone spoke up. A teenage girl on his swim team accused him of inappropriately touching her butt, and another teammate said they witnessed it. She also said he made inappropriate comments about rubbing lotion on her inner thighs. After taking a sexual harassment class, the girl decided to report him. He had previously been investigated twice before this incident.

He was charged with—and pleaded guilty to—a simple battery charge. He was removed from his teaching and coaching roles, and no longer works for the school board. He paid minimal fines—under $700—and was assigned community service. This man had been working as a teacher and swim coach to young girls and boys since 2003. It took 15 years for someone to call him out. I can only say that I didn’t know any better at 14 years old, but I do now. I’m thankful to the brave young girl who spoke up and finally ended it.