The Hidden Toll of Factory Farming 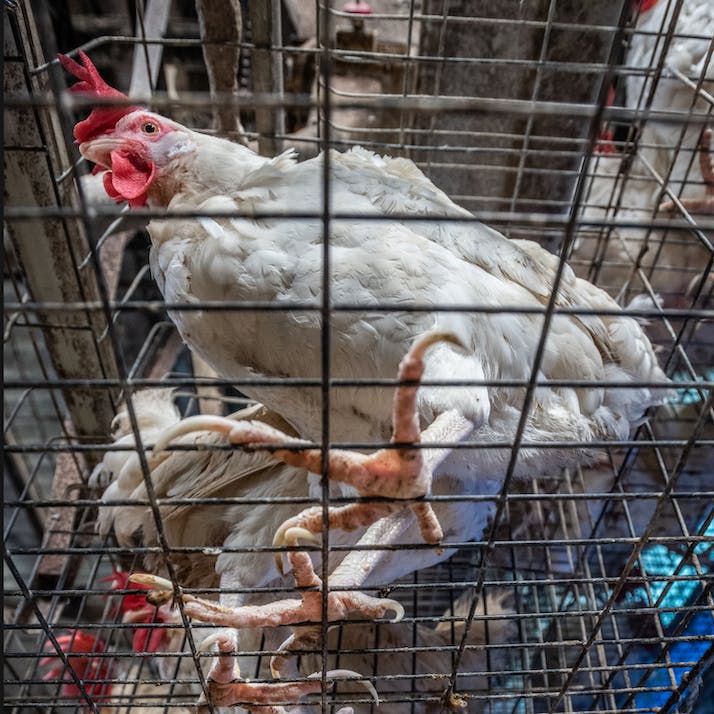 The Hidden Toll of Factory Farming

I went undercover to examine animal farming abuse and came away horrified by what I found.

I can’t forget it.

I can’t get away from it. To this day, I look at my hands sometimes and see blood, even though it’s not there. I hear the cries of tortured farmed animals ringing in my ears.

I’ve done four undercover investigations at factory farms—two at dairy facilities, one at a chicken facility and one at a fish facility. As an animal lover, I wanted to be a hero for farmed animals and expose the abuse and exploitation they endure daily. Little did I know, my brief time in the industrial animal agriculture sector would cause lasting damage to my mental health. When I have flashbacks now, I try to breathe and hang on to reality, but sometimes it’s all I can do to keep myself from falling apart. As undercover investigators, we put ourselves on the front lines of the animal advocacy movement, but there is a hidden price we pay in the pursuit of truth and justice for animals everywhere.

“”
Nothing could have prepared me for what I saw as an investigator.

Chicken Factories Show the Unforgiving Nature of the Agriculture System

To prepare for my journey as an investigator, I watched hours and hours of undercover footage of animals being brutally abused at factory farms, knowing I was going to capture additional footage to help expose to the world where meat, dairy and eggs really come from. I was also going to help people realize that there are healthier and compassionate alternatives to eating animals and animal products.

My harsh, difficult upbringing led me to believe I was hardened enough to be able to do this harsh, difficult job. I was fully prepared to leave family, friends and the only life I had ever known. At the time, nothing else mattered. As someone who grew up suffering, I wanted to help the animals needlessly suffering inside factory farms. Whatever needed to be done, I would do it without worrying about my own mental and physical health. But nothing could have prepared me for what I saw as an investigator.

I had no idea how unforgiving the industrial animal agriculture system could be until my first investigation at a “broiler” chicken factory farm. There, I witnessed how twisted animal farming really is. These chickens only live for roughly 47 days until they’re slaughtered for their meat. During every single one of those days, they live crammed into dark, windowless sheds by the thousands, with nothing in those sheds except food, water and corpses of other birds littered throughout the building. I picked up the dead bodies of chickens who had been left in the sheds for days until they turned into a purplish sludge that melted right through my fingers. I watched workers pull the heads off of chicks who were too small or sick and impale them on metal nails driven through the ends of plastic pipes.

The Dairy Industry Was Even Worse

On the last day of that investigation, I sobbed in my car as I left the site one last time, knowing that I was leaving behind so many chickens in such torturous conditions. My next investigations into the dairy industry were even worse. I witnessed affectionate, intelligent cows being beaten with wooden canes and metal pipes and dragged with chains by tractors. I watched workers mutilate young calves as they pressed hot iron tools into their skulls to burn away their skull tissue, part of the standard practice of disbudding. On one particular day, I saw a manager standing in front of an injured cow who was laid out on the ground behind a barn in the pouring rain. He had a rifle in his hand and held the barrel end of it to her forehead.

If I close my eyes, I can still see how frail and frightened she looked. When the manager pulled the trigger, her head fell to the ground. But then I was shocked into silence as she struggled to get back up again. The manager brushed it off with a casual comment and I continued to watch her pitifully crawling until another shot finally put her out of her misery.

I’ll never forget the sound of the calves grinding their teeth to brace themselves against the pain of the disbudding process, or the cries of the cows vocalizing in pain as their tails were twisted and their bodies beaten by workers forcing them into the milking areas. With each investigation, I ignored the brutal imagery and the noise in my mind. I shoved my emotions down and continued to do the work. It wasn’t until I conducted an investigation into the fish-farming industry that I realized that all the workers I encountered who committed all these shocking acts of cruelty might have been doing the same.

“”
He had a rifle in his hand and held the barrel end of it to her forehead.

Since fish are unable to vocalize their discomfort the way land animals do, I thought I would encounter workers who were indifferent to their suffering and not bothered at all by their pain, even more so than any of the other workers I encountered at the other facilities I investigated. But at a salmon hatchery, I was surprised by how often the workers expressed remorse over how the fish there were treated. And yet, their actions were contradictory to their words.

I documented workers stomping on fish, slamming them against walls and tossing them over their shoulders to perform “trick shots.” One day as I watched a barrel full of live fish slowly suffocate to death, a supervisor approached me and told me how much it used to bother him, how the standard practice there was to let the fish suffocate and die. He then finished his statement by shrugging and saying that he got desensitized to it all. And that’s when it all clicked into place.

The factory farming industry is inherently designed to influence employees to abandon all the best, compassionate parts of themselves in order to accomplish the tasks at hand. Low-level farmworkers are compelled to stifle their humanity in order to accept that they cause pain to animals during standard practice procedures, even when they hear their screams on a daily basis, enabling them to escalate their aggression into abuse. I experienced only a short amount of time in the industry and could already feel how the environment was designed to chip away at my spirit and leave me numb.

I escaped the grip of factory farming and I still came away from it with lasting damage to my mental health. I feel like a fractured version of myself, still working to put the pieces back together. Part of my path to healing involves continuing my animal advocacy work even after retiring from undercover investigations. In my current position, I work to spread awareness about the cruelty of industrial animal agriculture and the exploitation that extends to animals and workers in the system. Going undercover allowed me to truly understand how detached workers often become from their own moral compass in order to fuel the profits of a devastating industry that cultivates pain, fear and death. Everyone—humans and animals alike—are caught in the crossfire.