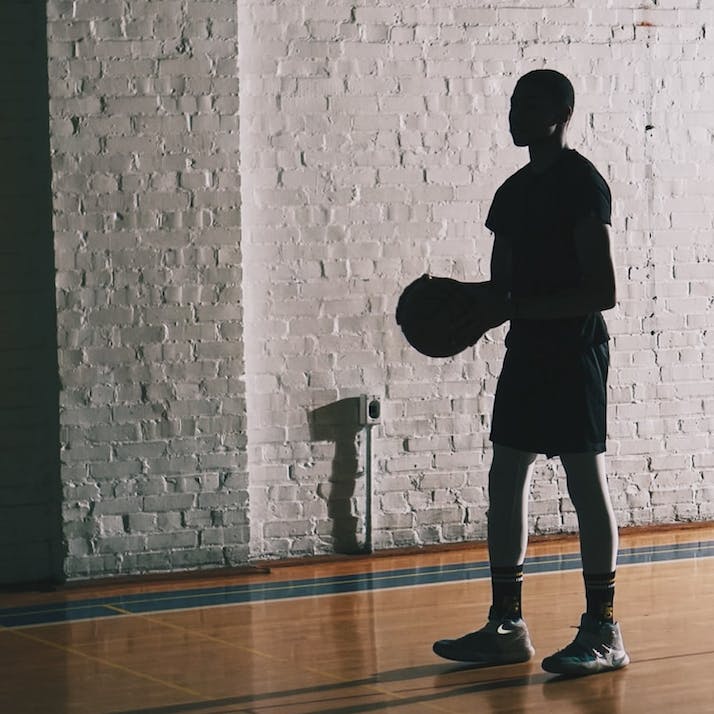 To Be a Part of the Team, I Had to Hide My True Identity

Playing basketball for a conservative Christian university was much stricter and more damaging than I thought it would be.

“Pound that ball into the ground like you’re nailing Jesus to the cross because of your sins!” my basketball coach yelled. I quickly looked around at my teammates to see if anyone else felt the reverberating shock caused by her words. Knowing what would happen if we refused or argued, we just kept on dribbling. I thought to myself: How did I get here?

I arrived at my small conservative Christian university in the fall of 2009 with one focus in mind: to play basketball. I had grown up in the opposite of a conservative Christian home, but I was familiar with strict narratives from my parents about “the way life is” or “how life should be lived” that primed me for the evangelical atmosphere I was entering.

I’d signed my letter of intent to play basketball shortly after my first visit to campus. I remember feeling excited for a new start and the ability to play basketball at the college level—something I had dreamed about my entire life. I had attended a Catholic high school, so I didn’t think too hard about the university’s religious underpinnings. I figured that the culture would be similar to my high school experience—a simple prayer before and after each game, and not much else.

I quickly found that my assumptions were wholly mistaken.

“”
Whether we were lifting weights, running amphitheaters or playing in an open gym, we were constantly reminded that we needed to trust in Jesus.

I Had to Outwardly Trust in Jesus to Push Through Workouts

It’s 6 a.m. on the first week of preseason workouts. We’re all gathered at the gym. There are 30 of us, a mix of players from the varsity and junior varsity teams.

“On the line!” our head coach demands. “You’re gonna need Jesus this morning!”

We sprint the full length of the court and back.

We’re almost an hour into our sprints. My teammates and I are willing our bodies up and down the floor: sweat dripping, tears falling, hands on knees and heads. When I get to the other end of the court, one of our assistant coaches comes up to me and she asks, “Who is your hope in?” I take my hands off my knees, wipe the sweat from my face and stand up.

I stare at her for what feels like minutes and tentatively reply. “Jesus.”

“That’s what I’m talking about! Now trust Him to lift your knees up and finish these sprints!”

Confused by this interaction, I went on to finish the sprints and somehow managed to make it through the full six weeks of preseason training. Whether we were lifting weights, running amphitheaters or playing in an open gym, we were constantly reminded that we needed to trust in Jesus. As a 17-year-old who’d never interacted with this kind of evangelical Christianity before, I quickly learned that in order to belong in this new community, I needed to share in this belief that if I trusted Jesus in everything I did, I would make it through. I would succeed; I would gain victory.

“”
I did this because I knew the cost of membership—and I was willing to pay anything to belong.

My Sexual Identity Was Hidden on the Court

As the season progressed, I found myself becoming more aligned with the beliefs around me. This change had less to do with fervent belief and more with the reality of being a closeted gay kid on a conservative Christian campus. I grew up in a home where my parents had their own ideas about life, and they insisted I wasn’t gay despite my repeated attempts to convince them otherwise. I arrived on this campus as a kid desiring love, acceptance and belonging. My hunger for membership within this community brought me both comfort and fear—a comfort that if I followed the rules, I’d be granted membership and a fear that if I was found out to be gay, I’d lose it all.

Shortly into my first year at the university, I found that there was a specific language that this community used when speaking about those who were gay. It’s important to note that being gay was always framed as a “struggle.” By naming this a struggle, rather than claiming it as an identity, it was made easily comparable to other nominal sins, like the excessive consumption of alcohol or an appetite for pornography. I also found that by naming it a struggle, this community avoided saying things like, “Oh, you’re struggling with being gay,” but rather they’d say, “Oh, you’re struggling with same-sex attraction.”

When I was introduced to this phrasing—and the dehumanizing acronym “SSA”—it was like a breath of fresh air. Now I had the language I needed to tell the community around me what I wanted to tell them without fear of being cast out. I knew that if I utilized this language they had given me, I’d still keep my membership intact and be able to experience some semblance of authenticity in my life—which had been lacking for quite some time.

In the short-term, after sharing my “struggle” with close confidants on my team, I got the response I’d hoped for. In my framing of being gay as a struggle—placing this struggle outside of myself by naming it as same-sex attraction—I was only further ushered into the community. My vulnerability and authenticity were celebrated, but I knew that a caveat to this acceptance remained ever-present. If I ever showed a lack of belief, or “succumbed” to my struggle with same-sex attraction, I would be readily removed from the community. So at 17 years old, I knew I only had one option if I wanted the love, the acceptance and the belonging that I so deeply desired, I had to fight against same-sex attraction. That meant I had to fight against myself.

Looking back on these experiences today—13 years in my past—I only have compassion for my 17-year-old self. I didn’t know what I didn’t know. All that I did know, however, was my desire to belong. So, when my coach told us to pound our basketballs into the ground as though we were nailing Jesus to the cross for our sins, I did. I used every bit of strength in my fingertips to drive the basketball into the hardwood floor.

I did this because I knew what I’d gain if I did it.

I did this because I knew what I’d lose if I didn’t.

I did this because I knew the cost of membership—and I was willing to pay anything to belong.