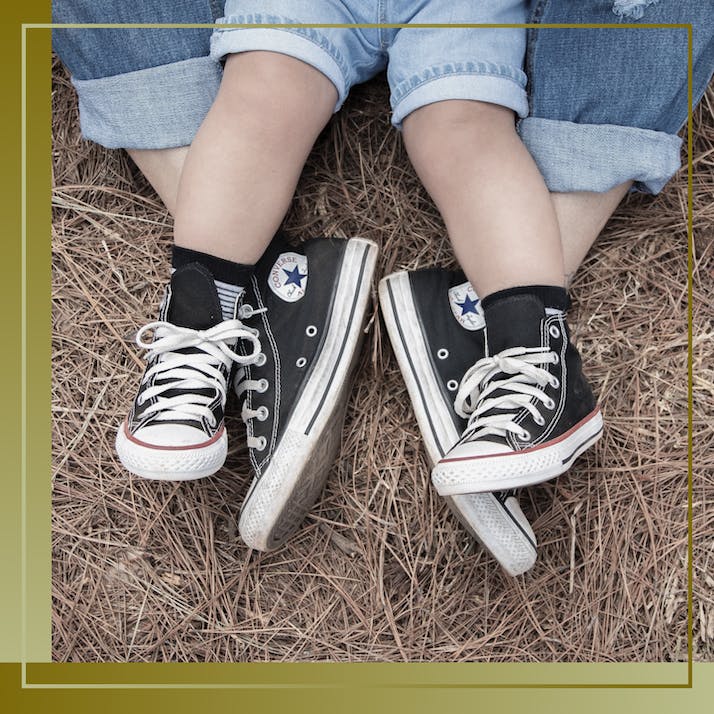 I’m Happy That I Filled My Mom’s Shoes

I had to take on parts of my mom’s role when she couldn’t take care of my little sister and me anymore.

“What did she ask you?” I sat across from my sister on my bedroom floor, nervously stroking the faded blue carpet. We were both exasperated, one eye roll away from cursing the whole world. Our shoulders tensed, holding the weight of the room.

“Actually, it was a guy, the same one who came to our house a couple years ago. He just asked all these questions about if I was being taken care of and if our house was clean. I said yes, of course. He didn’t ask about anything important,” she said with an exasperated laugh. Looking around, the house wasn’t tidy, but it was passable. At just 11, my sister was discerning.

She always knew what was slipping through the cracks, what adults weren’t noticing or didn’t seem to care about. She was unafraid to call out teachers and counselors who expected too much from a kid without a mom, whether it was a poster board for a project or birthday cupcakes. Somehow, my sister knew there was no shame in telling people what was going on in her life so that they could craft their expectations accordingly.

And I, seven years older than her, had become an intuitive, if hyperaware, MacGyver. I was adept at answering questions the right way, or the way that wouldn’t get anyone in trouble. I knew when to show a little emotion, but not too much, to people in charge. We had both molded our understanding of adults around the fallout of our mother’s absence: They could be unpredictable and unfair, so it was best to always think a few steps ahead.

“”
I knew I had taken on much of my mother’s job description once she had left the house to bounce between psychiatric institutions and her siblings’ homes.

I Was Often Mistaken for My Sister’s Mother

On that same bright and sticky June afternoon, I was called to the guidance counselor’s office. With six college acceptances and one full scholarship in hand, I wasn’t worried. I had just received an award in the AP Psychology class I was called out of—Most Likely to Change the World—and was feeling optimistic. When I opened the door to my counselor’s office, I was greeted by an unfamiliar face: a woman in drab business casual, just a touch more formal than my counselor’s typical garb.

The woman from the Department of Youth and Family Services had an unusual slew of questions for me. Instead of asking about our mother’s schizophrenic episodes or whether our father was feeding us properly, her questions, which always felt more like accusations, were about me.

“An employee at Great Clips said that you got upset and yelled at your daughter—I think they meant your sister—then took her out of the salon.” She looked at me with cool suspicion, the kind I was used to from adults in institutions: cops, counselors, judges. Something about a smart, capable and unsuspectedly kind teenager seemed to put them off.

“That’s not what happened,” I gasped. “They shaved off part of her hair without telling anyone what they were doing. Then, they said, ‘We can’t do hair like this.’ I was horrified, and my sister was crying. So I told them off and took her somewhere else. This is crazy; I’m obviously not her mom!”

Aside from reminding me that few adults could be trusted, the social worker’s visit was pointless. Feeling deflated and insulted, I returned to class with tears in my eyes, counting the days until I’d be free of this mess in college.

I Had to Take Over My Mom’s Responsibilities

The hairdresser who mutilated my sister’s beautiful, tangly curls got one thing right: It seemed like I was the kid’s mother. Despite my being baby faced, rail thin and spending all my spare time on Tumblr, waiters and grocery store clerks often said things like, “And for you, Mom?” I wanted to be surprised, but I wasn’t. I knew I had taken on much of my mother’s job description once she had left the house to bounce between psychiatric institutions and her siblings’ homes, even if I had never signed up for it.

In the same way my mother took me on all her errands before her illness took over, I took great joy in bringing my sister on my little jaunts around town. As soon as I received my license, I shared my newfound freedom with my sister. Getting a burrito after school? She’d be getting one, too. Going to ogle stuff I can’t afford at Target? “Just get in the car!” In those moments, we were just sisters, not warriors fighting a system that seemed determined to make our lives harder.

While I couldn’t buy her new shoes or pay for either of us to see a therapist, I knew that these little tastes of freedom were important. Our father worked long hours and was often tired and frustrated, which I could empathize with. I was tired as hell, too. But I also had an insatiable drive to prove that the world wasn’t all bad; in fact, it could be pleasantly mundane.

I didn’t have words for it then, but it wasn’t normal for teenage girls to be everyone’s shoulder to cry on while also cooking meals, grocery shopping, working two jobs and getting straight As. Some kids got to be kids, and I envied them. And while I knew that I had grown up too fast, I wanted my sister to know that she could be a kid—at least as long as I could help it.

I Want to Bring Joy Into My Little Sister’s Life

I don’t think I would have called it that at the time, being that I was still a kid myself in most ways. But when the holidays came around, I knew I had to make an effort. Having had several ambivalent birthdays and uncelebrated rites of passage (prom, sweet 16), I wanted to give her a semblance of normalcy. I wanted her to have a few memories of her and me doing anything else but solving adult problems.

So I became the Easter Bunny. Recalling the cellophane-wrapped baskets I hunted for as a toddler, I drove to the dollar store and filled my flimsy little cart with everything egg-shaped. In the middle of the night, I mapped an egg hunt down the hall and under the kitchen table. I smiled proudly to myself until I heard our pug crunching one of the plastic eggs open. After I wrestled it out of her tiny cavern of a mouth, I collapsed in my twin bed. Just like a parent.

In the morning, my sister giggled at the plastic prizes hidden around the house. She looked proud of herself at the end of it, her treasures spread around her while she played a Wii game. I don’t know if she knew I did it, but I knew for sure that we both sensed a little magic.

Later, I was Santa Claus and all of his elves, contracted by my dad to brave the Black Friday hoards and get her the toys from her Christmas list. Truthfully, I loved these tasks. I not only got to bring a little wonder to my sister’s day but I also could flex my adult skills, like using my debit card. I hoped that all these little acts would show her that even when someone lets you down, there will be others who are prepared to lift you up.

My sister is my solace, my friend and my constant reminder that we were brought into this world to do so much more than struggle. I am not our mother, and I never will be. But I am a big sister, and it’s a job I take seriously.