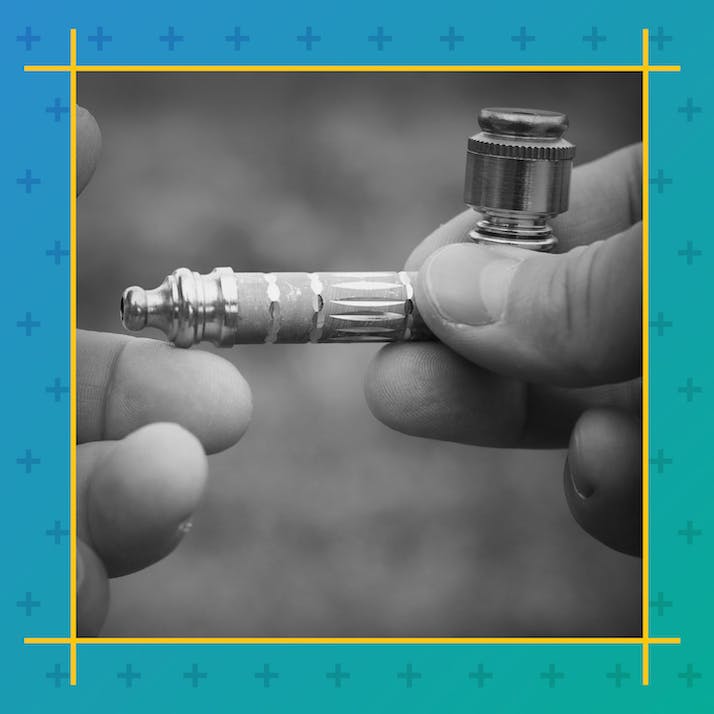 I Hand Out Free Crack Pipes to Save Lives

The right's latest boogeyman is actually our best bet for safer cities.

I've been a volunteer at a harm reduction group in New York City for about four years now. I do a bunch of different stuff. Usually, when I'm there, I'm running the syringe exchange.

One day a week, I go out to distribute syringes, test kits and pipes, as well as food and clothing, hygiene supplies and so forth. We also do Narcan training, including ones where we set up at shows and events. One of the cool things we're going to do soon is to actually do in-person drug testing to let you know you really do have cocaine or ketamine and not something else, like fentanyl. That's something New York desperately needs and that they’ve had in certain parts of Europe for years.

There are a lot of people out on the street. They might be coming out of prison. Maybe they never really did dope before but they started in prison a little bit, and then they get out and they have a habit. But they don't really want that to be their life or have this habit define them. A lot of times, somebody comes out of prison, or they're temporarily unhoused, and there will be a six-month period that they'll be using and on the street and they don't have access to supplies. And in that six months, a lot of bad stuff can happen. They could contract something from sharing needles. They could have a wound become infected; they could lose a limb. That six months of someone being down and out—or two years, or however long it is—shouldn't define the entire rest of their lives. They shouldn’t end up with an easily preventable disease or a wound that would be easy to keep clean if they just had basic access to fresh water. That shouldn’t be the end for them.

So by providing very simple supplies like this to people, it gives them a chance to not just reduce the harm that they might do themselves or that the environment does to them—it also buys people time. If they want to get clean, you can reduce the risk so that they just have a better shot. But it also doesn't matter if people get clean or not. If they don't, they should at least be able to have safe access to supplies and not have to consume things in the most miserable way possible. I'm not judgmental. I don't give a fuck. What people use or how they use it has nothing to do with me. At least here, you should feel comfortable. The people who come here, when they leave, they have to go through the rest of their lives where things aren’t so comfortable.

“”
The people who come here, when they leave, they have to go through the rest of their lives where things aren’t so comfortable.

Dope is one of the hardest things I can think of for humans to deal with. When opium was discovered, people thought it was a test from God, this wonderful thing that allows us to do crazy surgeries, but it's also such a vicious drug. It feels like it was literally put on the planet to test us. And so it's incredibly hard to get off of or deal with your life. That takes time, and it’s not as simple as people think it is.

People think that you can go to your insurance company and they’ll take care of it. But usually, the most that they'll pay for is maybe six weeks in rehab, and that's just not enough time for people to kick these habits. And they see overdoses as an event, like a car accident or something that you just deal with and move on. But that’s not how car accidents work. You might be dealing with injuries your entire life from one. Overdoses are the same way.

Our health system isn’t set up to provide the kind of care that addiction and its effects require. They’re the ones who literally fucking dumped OxyContin on everybody and made so much fucking money doing it. It's such a joke. It's infuriating. But now a lot of the country understands that. So harm reduction is a way to add to a whole holistic plan for people to live better and deal with these types of things.

Some people, when they hear about harm reduction, they’re like, “Holy shit, that really makes sense.” And then some people just can't make sense of it. Even most people in my family don't know that I do this work, or if they do, they don't really understand it, even though there have been many people in my family who have died of overdoses or are still using. It’s a mental block. They'll just be like, “Wait, did you say you give out crack pipes? Wouldn't that make people do it more?” It's a very deep-seated thing. But that’s not how it works, and there's a lot of data to back that up.

Harm reduction helps a lot of other people besides the person using drugs. Especially with syringe exchanges. People complain that the city is out of control, that there are syringes everywhere. And I’m like, “That's because you fucking made the city take away the bins that we had to collect syringes—where you think they're gonna go?” There are solutions to this, but people don't want to look at the one box. "I don't want children in the neighborhood looking at syringes and shit. They're dangerous!"

“”
The problem is the war on drugs and the state.

Everything You Think You Know About Crack Is Wrong

Crack is interesting because people just think it's the scariest, craziest thing in the world, like people murder people on it or something—but it's not. It’s a boogeyman drug, but it's super common. Tons of people do it. And we've been dealing with it since the ’80s.

The main problem with crack pipes is that hepatitis C is really easy to transmit with them. We also give out these things like crack condoms so users don’t burn themselves smoking it, which can also transmit infections. If you smoke crack, you’re going to find a way to do it. You might as well be able to do it cleanly.

I had the idea with our old coordinator at the harm reduction center to start giving out crack pipes and meth pipes. I put together a fundraiser for that, and we bought the first ones and started to give them out. That went really well. The health department actually heard about it, and they were like, “That's great, we want to fund it.”  We were like, “Holy shit, we're actually going to get funding for this and at a high level.” But before I even got to really process it, everybody on social media started saying, “Biden’s giving out crack pipes,” and the funding never came through. It was frustrating.

People think ideas like this are crazy because that’s what they see on Law & Order. They can't even begin to process how good that is for people and how good a small change like that can change people's minds about everything. If you can get the federal government to give you money to take care of people who are considered the lowest common denominator, that's a great opportunity to change people's minds about how we treat each other in general.

But if the federal government doesn't fund that shit, we'll keep doing it no matter what. That's one of the reasons I like harm reduction so much because we take care of each other in all these ways. If just a little bit more of the population did stuff like this, it would make a huge difference. The more community you have, the safer shit is in general, all the way across the board. And that’s how you make a better world.

I grew up in the Bible Belt. I realized there's a pattern with all the people I grew up with, where the way we would rebel against what we were surrounded by was to get really fucked up. You weren't supposed to drink or smoke or do drugs, so everyone there who didn’t fit into that mold just got really fucked up. I lost people to drugs growing up: my family, a lot of friends. My first reaction to it was that I was just really mad. I hated some of these dealers that I knew. There were times when I was like, “I’m straight up going to murder this motherfucker for giving shit to people I knew.” Then, it clicked, and I was just like, “Holy shit, this is exactly what the people in control want: If you don't fall into line with them, then you kill yourself with fucking drugs.”

Then I moved to the Pacific Northwest and came across syringe exchanges. I'd heard about it when I was a kid—through the punk community—but I’d never really connected with it. I decided I'm not really mad at any of these dealers or anybody. It is what it is. The problem is the war on drugs and the state.

The one way I can actually fight that is to do harm reduction and do it well, and keep these people alive because that's what the people in power really don’t want to see. The worst thing for them is for these people to be kept alive. I wish we could have done more of this shit earlier. I often think about all the people we lost from the late ’60s through the ’90s, how different our cities could be because so many really cool, creative, smart and radical people were wiped out, whether it's from street violence or drugs or AIDS. It’s a radical act, just keeping people alive so that they can be here to fight. I want people to be sober if they want to be and to be happy and healthy but not because of morality. I just want them to be happy and be a problem for the state.

We need safer injection sites and a safe drug supply. But also, so much money needs to be put into the way pain is treated because, right now, it’s fucked. There needs to be a full staff of people working with a patient and a whole program for it so that someone isn't just pushed in and out of pill mills. There should be follow-ups and inpatient and outpatient care so people don’t even get into street drugs in the first place. It’s really hard to imagine because, in order for that to change, you need to get rid of insurance companies and restructure the entire medical system. Give me a big enough check and I'll do that.