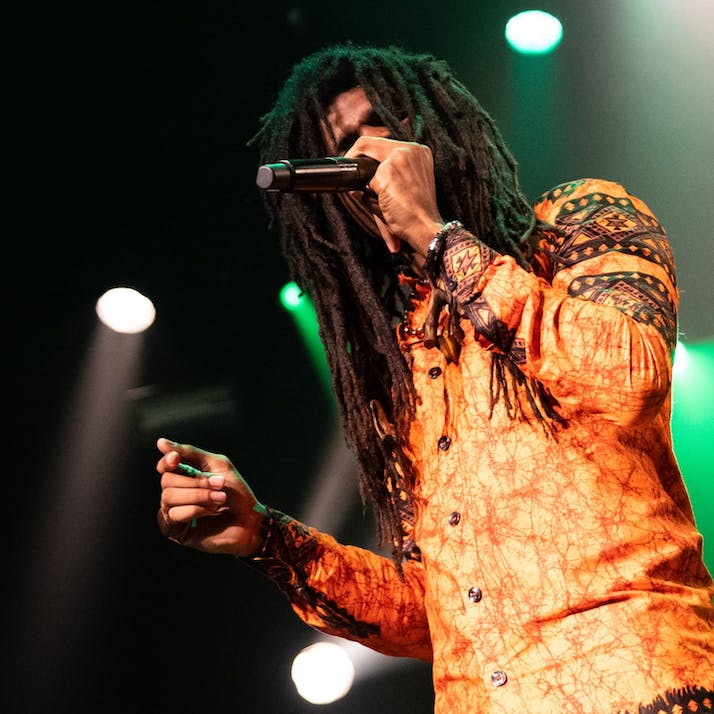 Growing Up in Haiti Taught Me the Power of Music

An expat explains music’s role as an instrument of social-political change, and how those lessons can apply to the rest of the world.

I was supposed to be a doctor. Growing up, I was really focused on school, and music was always like lessons after school or something for me to do on my own time. But it eventually ended up becoming a huge part of my life without me ever realizing it. Now I’m a producer and DJ, and I’ve worked on a lot of projects and toured and all kinds of stuff.

I was born in Port-au-Prince, Haiti. My dad’s Haitian and my Mom’s Guyanese. Both of them are musicians—my dad actually had a band that was pretty popular in Haiti. I grew up in a house with a lot of music. We even had a studio in the house. That whole experience of getting to live in Haiti, which is already a musical country, but then also have music in the home, and really get hands-on experience through my parents was amazing.

Haitian Music Brings the World Together

As long as Haiti has existed, music has been very, very important to the culture. I think that partially can be attributed to the fact that music was a huge part of West African culture, and that everything that’s happened in Haiti is a fusion of West Africa, native Caribbean people and all of the different European colonizers in the region. Each of those cultures has a love of music in their own way, but I think it’s about fusion that created the Haitian culture that is in love with music.

The international media that came into Haiti opened my eyes to what genres existed outside of the country, like hip-hop, R&B and house music. But locally we had a really huge music culture. There’s konpa music, which is a Haitian dance music genre similar to zouk, and rara music, which is more traditional ceremonial music. There’s always been a very informal music industry in Haiti, too. In the states, you have the big labels everyone knows about, the publishing companies. Haiti didn’t really have any of that. Instead, there would usually be some guy who had a studio, and it was a label too, somehow. And he kind of put it all together, and would help release artists’ songs on his own imprint. That was a big part of the industry in Haiti. The more I learned about it, to see how it almost felt like Motown, or whatever the equivalent of that was 50, 60 years ago in the U.S.

The way that history was recorded in West African culture, and because of that, in the Caribbean, it wasn’t necessarily written. A lot of it was oral history. The easiest way to recall certain things was through song. So you had storytelling and history combined with music, and it served an actual functional purpose on top of being a creative outlet. It was pretty much the only way to record what was happening around you. I think that idea just stuck around in Haiti, with rara music and carnival music, for example.

“”
As long as Haiti has existed, music has been very, very important to the culture.

Haitian Culture Taught Me How to Speak Through Music

Every year in Haiti there's a huge celebration funded by the government where the whole country is invited. You have all these different floats and artists, and basically the whole city is out in the street celebrating. It’s a chance for the artists on these floats to be able to talk about certain things they think are important, almost like a recap of the year that preceded. They can get pretty pointed when it comes to certain issues in the country, like corruption or poverty. Or they can talk about joy, and some amazing things that happened. And it’s all in song form. It’s a way for the entire country to kind of have this unified wavelength, unified focus on something happening.

As I developed as an artist, I started realizing that community, in a lot of different ways, was the most integral, central part of music. Community allows artists and fans to connect, even if they were in a different country or speaking a different language. So, for example, having music videos from the States and Europe reach Haiti, and people watching them there and emulating what they were seeing. They’d probably never meet the artist in the video, and yet they had a profound effect in creating entire genres that exist now, like rap kreyol or Haitian house music, that came from things people were seeing and adapting to. It created whole industries. It was really cool to see, and also empowering for a lot of artists in the country. They got to feel like they were a part of something, and they were able to put their ideas down and connect with the world.

The music, lyrics, sounds, textures shift and change, because those are all different individual decisions you make as you’re creating. Sometimes you want to tell a story, sometimes you want to be metaphorical, sometimes you want to be extremely literal and talk about what happened that day in a song. But for artists like myself, it comes from a place of purpose. You’re not chasing a hit, or chasing something that’s going to make just your life better. It’s simply creating, and sharing what I already have. And whatever that ends up being and whatever format that ends up looking like, it’s reflective of who I am at this point in my life.

“”
As I developed as an artist, I started realizing that community, in a lot of different ways, was the most integral, central part of music.

How Music Can Change the World

You can have your entire worldview changed from an artist, if they can make music that transcends any individual level. There are a few examples of that you could see on a large, large scale. If you look at what Bob Marley was doing, and at everything he was singing about, he was like a preacher in his music. It was so powerful for people of all types, from all over the globe to understand what a Black man from Jamaica could be going through, and empathize with that experience. Because it’s very personal music, as well as being political. So much of Bob Marley’s output is very specific stories or very specific things he was going through at the time, and yet in its specificity, it allows it to become such a broad and universal song or concept.

Because the philosophy I have on life is such a central part of who I am, I think it’s led to the artists that I work with. Maybe in the beginning I was kind of surprised that I was meeting a lot of artists that had very similar mindsets to me and believed in the same kinds of things that I believed in. But then over time, it ended up being so many of them, until it was everyone that I worked with had that same type of outlook. I realized I was just attracting that type of art. I was driven to create that kind of art due to the outlook I had on my life. It’s been amazing to get to meet super-successful people across many different genres, or even outside of just the music industry altogether, and be able to talk about the same kinds of things, and have the same concepts and end goals about what we want to be able to achieve—for the music that we make, the countries that we represent, the cultures that we want to uplift, whatever the case is.

I’m an idealist, but I also consider myself a realist. Like I do try and think about, “What is the outcome of this situation based on historical precedence? What are the ways different things have happened based on people’s decisions in the past?” And I try to learn from that and I try to build what I do today and the choices that I make.

If you do look at history, there’s a lot of precedences to be nervous about things that are happening right now. There’s always darkness. But despite that, in all these kinds of really dark situations and the darkest, darkest times in history, somehow humanity has persevered and come through it. I think that overall the world has become a better place over time. I really do. It might be slow, it might be gradual, but it’s becoming a better place for a lot of people.