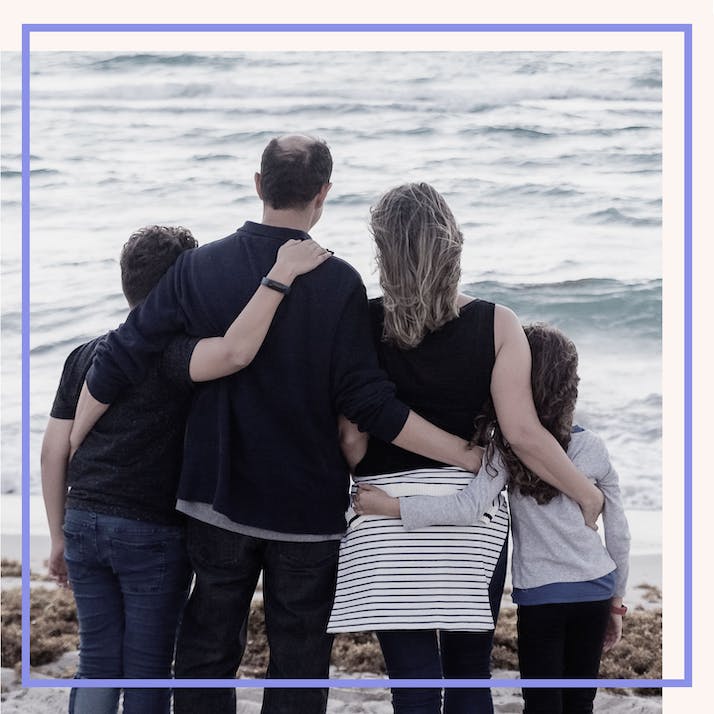 Growing Up in an Interfaith Family Taught Me Love and Respect

Throughout my teenage years, I learned a lot about how often Christianity and Islam overlapped and how to embrace their cultural differences.

My parents met when my eventual stepsister Kenya and I were 12 years old. My dad and I grew up Christian; she and her mom practiced Islam. But one of the first things I remember learning as our families merged was respect.

Learning Boundaries When Two Faiths Meet in One Home

Kenya was paramount in establishing the ground rules the first time our parents decided to have a tennis date. “Respect my house!” she said when I had pushed a boundary regarding being able to play video games in her room without permission. I loved Super Nintendo, but I would soon learn the true meaning of boundaries and what that would mean for us to get along.

Kenya taught me that I needed to respect her space and things all by her demeanor. She was able to establish boundaries by showing her distaste through facial expressions when I crossed a line I shouldn't have. She and Mom weren’t practicing Islam when we met them, but my sister called herself a Muslim because she still did some of what Muslims are raised to do. That included being respectful to parents, not wearing shoes in the home, not eating pork, not celebrating birthdays, not celebrating the calendar holidays and offering greetings in Arabic.

I learned during my teenage years to respect their privacy and follow any instructions I was given about their meals. Kenya was also diabetic, so diet was always a source of concern. There was no pork allowed at any meal whatsoever, but I was a bacon lover, so I often asked my dad for snacks to eat before visiting them.

“”
I learned early on that the Quran and Bible have a lot of similarities—both recognize Jesus as the Messiah—but the differences between them didn’t matter as much to me.

Communication Is the Key to People of Different Religions Living Together

It wasn’t until I was 17 that I became a devout Christian, and by that time—between events involving my grandmother and dad—my stepmom had converted to Christianity. Kenya still remembered her prayers in Arabic, but she'd undergone a momentary shift to Christianity as well, even attending church with us each Sunday.

I learned early on that the Quran and Bible have a lot of similarities—both recognize Jesus as the Messiah—but the differences between them didn’t matter as much to me. My dad was already in a relationship that had sustained and embraced an understanding between the two religions, and our parents talked lovingly to gain clarity instead of trying to shove their religious disciplines down the other’s throat. It helped that within a year of our meeting, Mom was already starting to transition to Christianity.

It left Kenya and me in a space where we could embrace our differences, even though I think my knack for stepping into a room and naturally taking over annoyed her at first. Once she saw that I was willing to listen, understand and respect her, our love bloomed, and we quickly became inseparable, joking about our differences and the many hiccups we would encounter playing video games together.

My Mother’s Interreligious Marriage Was Founded on Respect

For my mother, the move from Islam to Christianity involved some questions. She wondered whether it was right that men and women could be born with gifts given to them by Allah, but women weren’t allowed to freely use them in leadership positions. When she raised these questions to others in the mosque, she was advised to speak to the religious leader, called an imam.

As she made an appointment with the imam, she had the impression that her question was inappropriate, that she should “sit down and shut up." The imam never answered her question, so she searched for some way to be able to use her gifts and for others to have God’s blessing to use their talents to their full ability.

When I asked my mom how she found her voice and freedom she so eagerly sought, she said that she and my dad "had an understanding since the beginning that he’s a leader in the military and in the church and the head of our home, which I respect, but he doesn’t stifle my ability to learn and/or teach in education or business, which are my strengths. We respect each other, and there’s never been a question or inhibition about what I’d like to pursue."

My mom went on to receive her master’s in education from Strayer and another degree in business, and I thought back on the last 20 years that we’ve been family. It’s been a privilege to witness my parents’ relationship and utilize the same principles of respect and understanding, defining love not by the religious boundaries we have but by a person’s character.

“”
I grew up in a house where civil discourse regarding religion took place over dinner without resulting in public protest, and I’m thankful for it.

My Sibling and I Have a Good Relationship, Despite Different Religious Views and Practices

Kenya has been a practicing Muslim for years, but when we talk, we have the same balance between us. She teaches seventh-grade math; I sell electronic components for a corporation. When we recapitulate the events of our days, our love and support for one another is an insurmountable, indiscriminate bubble that holds us both to a promising future and a loving present.

Because I live on the West Coast and she lives on the East Coast, my account of the day will often run into her time for prayer, at which time I’ll cut myself off or ask her to call me back when she’s finished. She’s such a solid support as I navigate being a parent, divorcee and employee, and I’ve come to appreciate her as if we’ve been family our entire lives. I don’t have to question if she feels the same.

Maintaining Interfaith Dialogue Was More Difficult Outside Our Home

The question my mother raised about the role of women in Muslim culture is one that has been raised by others in the past and is a source of true contention and controversy. After my mom made the choice to convert to Christianity, she was excommunicated from the mosque community and ostracized by her former friends and colleagues in the Muslim community.

The church has, in contrast, completely embraced my mom’s ability to teach. She currently leads Sunday school and is superintendent for a local church school as well. My dad currently serves as a Christian education leader and IT/cybersecurity professional at the same church, serving on the church board as well.

Ultimately, I feel like I’ve had more than half a lifetime learning about the hostile beliefs outside our home. I grew up in a house where civil discourse regarding religion took place over dinner without resulting in public protest, and I’m thankful for it.

The Torah, Bible and Quran come from the same Lord, and before the earlier texts were altered, all three had the same message about God's rules for his people. They beg questions about how the differences are deliberated and why slogans like “coexist” remain relevant.

All we can do is continue to love one another as a family and hope that eventually, somehow, the rest of the world will catch up.