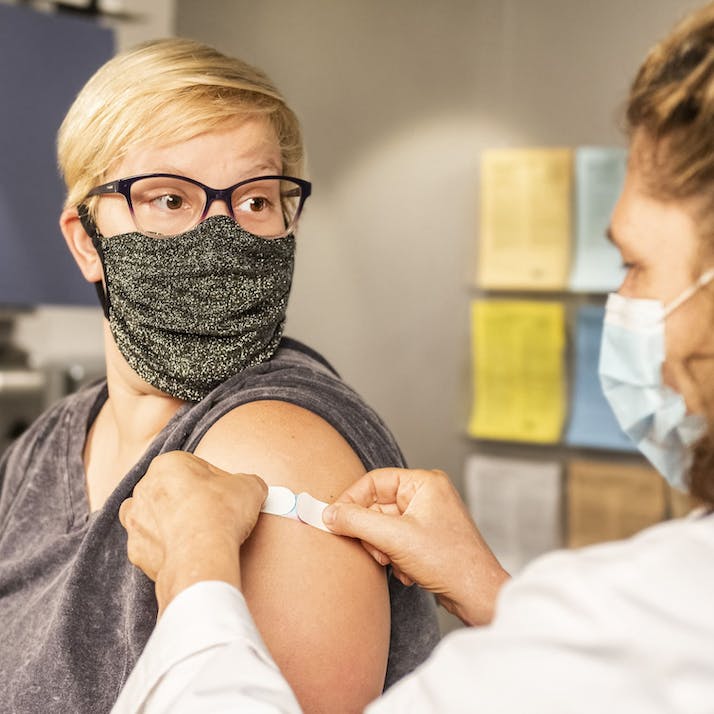 Because my husband works in the ER, I was able to receive an early leftover dose.

A few times, I’ve been asked outright about my chances of getting the COVID-19 vaccination. “I’m too young for the age cut-off,” I say, which is true in the state where I live. But I’m omitting key information: I’ve already been vaccinated.

My husband works in the ER.

In the tent erected in the hospital’s parking lot as a vaccination station, staff quickly noticed that the Pfizer vial that was supposed to contain five doses actually contained six. At the end of the day, this left them with valuable bonus shots they were loath to discard. When this realization occurred, several staffers came into the ER to quietly ask if spouses could get to the tent in the next 15 minutes to be vaccinated. My husband came home that night and told me to be on alert that I might get that call from him on any given evening.

My experience of being vaccinated in this way was furtive and exhilarating and felt absolutely historic. But as layoffs are looming in my husband’s department and we are scared of any little slip that might jeopardize his job, I cannot tell anyone that I got this amazing side benefit after a year of worrying he was going to contract COVID and die—or that we both would, and leave our kids orphaned.

I got the phone call from him several weeks after this epiphany. At 6:10 p.m., I rushed to the hospital, uncertain if a dose was actually earmarked for me, or if it depended on how fast I got there. In the dark as I walked towards the luminous tent, lit like a Japanese lantern, another woman also made a beeline for it. It struck me that maybe we were vying for the same, last shot.

“Forgot my mask,” she muttered, and returned to her car. I was embarrassed at how relieved I felt. Even once registered and waiting inside the first chamber of the tent, I was still unsure if it was really going to happen. The staff seemed urgent, hushed, secretive—and the vibe was definitely that of a landmark moment in history. After my years of writing about the 1918 flu and its years-long cycling (we really shouldn’t call it the 1918 flu, which implies it only lasted a year), here was a vaccination already prepared for us modern souls. I had the sense that we were all lucky, the kind of lucky that makes you tremble.

I watched as a woman begged for a shot for her sister and was denied.

“We don’t have one for her,” said the healthcare worker.

“Well, she can just sit next to me in case,” said the woman.

“No,” the worker answered flatly. “She has to wait outside.”

I inhaled, thinking of history and its narrow escapes or pivotal moments of many a “no” when a “yes” would have changed everything.

After my shot, I sat in another section of the tent with others, to make sure none of us keeled over. We were told to set our phone timers for 15 minutes. As a group, we were emotional. I had tears in my eyes, and a man sitting across the tent called out to me with his arms in the air, embracing elation. The man next to me, also a spouse of an employee, had arrived so rushed he didn’t even know whether he’d been given Pfizer or Moderna. (It was the latter.)

It felt illicit—but I reasoned that it couldn’t happen any other way. Opening up the bonus doses to the public would cause a stampede like the last lifeboat leaving the Titanic, leading to an unsafe environment for employees in the midst of a pandemic where everyone is trying to be socially distanced. And for me, as a spouse, it seemed fair. After all, we spouses are the ones who wiped every surface for months; we fretted over germ-filled shoes at the threshold and virus-laden scrubs in the washing machine; and we heard our mate coughing as we slunk down to sleep on the sofa. In a move that felt horrifying, I had contacted our estate planning attorney just to confirm he had the right phone numbers in the case our kids were left orphaned (my husband and I are both in the middle-aged group).

The pandemic has been hard on spouses of essential workers in all fields: What they encountered, we believed, might come home with them.

A month later, the clandestine atmosphere had completely vanished. When I showed up for my second dose, it was a sunny day. I'd taken the earliest available hour slot in case supply was limited. In fact, days before my appointment, news broke that another medical provider in the area was canceling its second dose appointments for lack of shipment.

This time, ribbons attached to traffic cones created parallel lanes for us to wait in, and a hospital employee directed us to the correct lane. It felt like security clearance at the airport, and the tone was one of boredom. I found myself with the same sort of gratitude, but definitely not as intense—because with the first dose you're already at 85 percent immunity.

The nursing supervisor in charge of the vaccination station periodically walked the line to ask if everyone was OK (people with mobility issues were taken to the front) and made sure we’d filled out our two forms. She engaged in good-natured ribbing with a woman who didn't have them and tried to say she hadn't been informed about them. "Nope!" the supervisor said with a grin. "I sent you that email myself!"

“”
My experience of being vaccinated in this way was furtive and exhilarating and felt absolutely historic.

For Those About to Jab, We Salute You

After I got the shot, the waiting area of the tent was completely full, so I took a seat outside. I was tempted to start scrolling my phone, but I made myself put it down so I could truly experience the moment. The supervisor came by and I called out to her—she sat down for a few seconds once I told her who my husband was. I thanked her profusely and told her the operation was running incredibly smoothly. She said things were going so well they were upping their doses to 100 per hour from 75.

But at a community vaccination event the previous day, she had had to turn people away, and they were angry.

As I walked past the line of incoming people on my way back to my car, it occurred to me that I wanted to get that rally going that she had tried to start—to clap, hoot and shout; to thank the medical staff who had been on the front lines for an entire uncertain year; to thank the volunteers who were there on a Saturday, masked and putting themselves in a situation others would have run from. I was too shy, and I'll always regret that.

But to anyone reading this who has been part of the medical field in this last year: You really were rock stars.