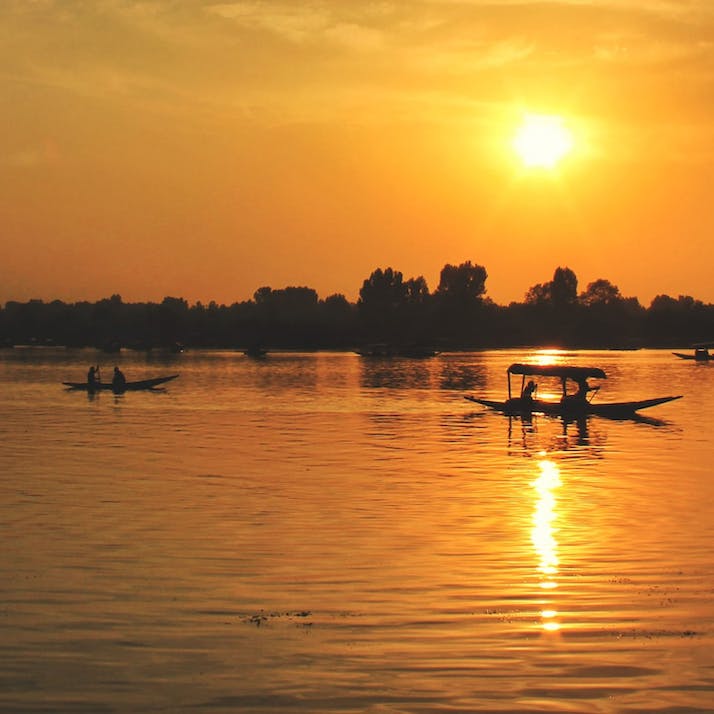 Gone Fish: The Beautiful Lakes of Kashmir Are Vanishing

Pollution and illegal settlements have poisoned the natural treasures of my homeland.

I was about to put my hand into the waters of Anchar Lake, situated in the congested area of Soura in the capital city of Srinagar in the Indian-administered part of Kashmir. “Hey,” my friend warned me, “Don’t touch the water. It will bite you back.” The water of the lake looked dark gray and had a layer of green weed all over it. It had an unpleasant odor.

I grew up in Srinagar and, over the years, I have witnessed the bloody conflict in the region and watched the beautiful freshwater lakes shrink.

Who knows? I may see them vanish as well.

Indian-administered Kashmir is a Himalayan region in the north of India. Both India and Pakistan claim Kashmir as their part, and the region has gone through decades of conflict since the partition of India, with three major and two minor wars fought between the two nuclear countries so far. The region is surrounded by Pakistan and China and is a Muslim-majority region where people have been demanding freedom over the years.

“”
I saw a woman come out of a house and throw a dustbin filled with dirt and plastic directly into the lake.

Anchar Lake Holds a Special Place in My Heart

I used to go to this lake once a month, sometimes twice. I love to visit the lake during winter to see the migratory birds that also visit it. Recently, I planned to travel to Anchar Lake for the first time in three years. When we first got there, all I saw was a green pasture and, for a few minutes, I wondered where the lake was. When we finally got to it, the shore was full of dirt and trash. I saw a woman come out of a house and throw a dustbin filled with dirt and plastic directly into the lake. I wasn’t shocked. I have witnessed these kinds of scenes before.

My friend and I were going to take a small wooden boat across the lake. As I stepped into the boat, it was wet and had a pungent smell. The lake looked more like a cesspool. The person rowing told me that he had been clearing the grass on the lake before picking us up. As he started to row, the smell of garbage mixed with drainage started to fill the air and grew stronger as we rowed further. It began to make me nauseous. I had to cover my mouth with a scarf, even though I was already wearing a mask.

As the oar passed through the water, the scum on the water pushed back and, as I tried to see the water, it was blackish. For a moment, my thoughts paused and I hoped not to drown there. I thought the smell and color of the water might be enough to kill me.

The boatman, an elderly man in his 70s, told us stories from when the lake used to be crystal clear and a destination for tourists. “We used to drink water from this lake, and it was beautiful,” he said. “Now it smells like garbage.”

The Locals Agree It’s a Catastrophe

“I wish I had the opportunity to see the times when the lakes in the city were beautiful,” I replied. He continued the tales from his childhood growing up near the lake and how it was his favorite spot for swimming.

The scenes and the condition of the lake made me feel sad.

It was a hot spot for fishing, and the lake used to be busy with wooden boats. Over the years, I have watched it turn ugly, thanks to a mixture of conflict, government negligence, pollution and illegal encroachments.

As I traveled on the lake, I met six elderly men who had stopped their small boats at different locations to cast their nets in the water for fish. I remember my parents telling me that the lake was once famous for its fish. There are just a few old men now who catch the fish here. The rest of the people have shifted to other jobs. “This lake has died,” one of the old men told me, “and fish here don't breathe anymore.”

“The fish which we catch now don’t taste as good as they did before,” another man said.

I could see that in the years since my last visit, many more small houses had been built along the shore of the lake. The lake is slowly being occupied illegally. People have been filling parts of the lake with grass and mud and claiming the spots. I saw many small kitchen gardens floating on the lake, masses of grass that the residents build and grow vegetables on. “This is a way of occupying land on water,” the person rowing the boat said.

“”
I thought the smell and color of the water might be enough to kill me.

Drainage from one of Kashmir’s biggest hospitals goes into Anchar Lake, which is a place for many fish species and lotus stems. The lotus stems are called nadru in Kashmiri, and they’re cooked into a number of Kashmiri dishes. I love eating lotus stems, cooked or raw, and most of them come from this lake. After witnessing the conditions there, I don’t know if I can eat them anymore.

Looking at the figures, I found out that Anchar Lake has shrunk from 19 square kilometers to nearly seven square kilometers over the years. I see the same tale as the famous Dal Lake. When I look at Dal Lake, which is a famous tourist destination, it looks a little bit cleaner on the outer sides. But as I travel to the interiors of Dal, the condition of the lake is worse. The inside scenes are not only a pain to the eyes but to the heart as well, with wooden houseboats draining their toilets directly into the lake while happy tourists pose for pictures.

Both of these lakes are dying slowly. Others in the valleys of Kashmir have already vanished, but no one seems to care. People have lost their livelihoods. I wonder what we are leaving for the coming generations to see. Visiting these two formerly beautiful lakes now, all I can see are the illegal encroachments and the lakes turning into dustbins.