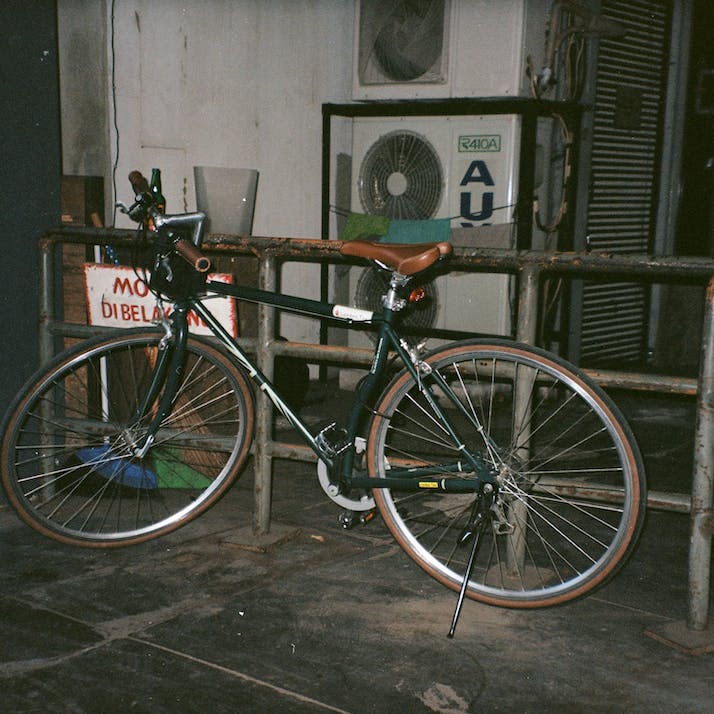 After I Was Hit by a Car, a GoFundMe Saved the Day

After an accident left her incapacitated, a friend—and friends of friends—stepped in.

Have you ever had the overwhelming urge to get a piece of art out of your head and into the physical realm? That was me with this drawing. It was the bust of a woman from the sternum up. The right side of her face was either scraped or melting off, with blood, muscle and bone exposed. She held her right hand up to her face, as if saying, "What happened to me?" I hadn’t intended for her to look like me, but I’d used a mirror to guide her facial proportions, so it's easy to see how we ended up looking similar.

I’m no stranger to artistic impulses guiding me to work feverishly on a project. This time I felt like I couldn’t stop until I had at least finished the initial sketch. Tuesday night, I stayed up until 3 a.m. to sketch it, with plans to paint it in watercolor the next day. A few hours later, I was found unconscious, tangled up with my bike, in downtown San Francisco.

My bike gave me freedom. At this point in my life I’d been biking everywhere I went, every day, for over eight years. The whole time, I’d never been in an accident. I don't take big risks with my body, and with my asthma, I would never push myself too hard for fear of not being able to breathe. On top of all of that, I also have a healthy respect for the fact that cars are big, dumb, murderous tanks that can't see me as easily as I can see them. Perhaps this caution is why I felt impervious, and how this whole situation caught me off guard and drastically changed my life.

I Was Hit by a Car and Left for Dead

The details of this day are fuzzy, as happens when massive head trauma occurs. I remember hopping on my bike in the morning with the intention of going to the courthouse downtown, in order to try and figure out how to finally clear a bunch of old tickets on a car I hadn't owned in many years. I remember bombing down a hill with the cool San Francisco fog on my face. Then I remember total darkness and a feeling of flying. I didn't have control of where I was flying, but I never felt scared or in danger. It was surprisingly fun. The next feeling was as if I had slipped into the world's most comfortable memory foam pillow top bed, with the softest, plushest blankets you’ll ever feel. There was an immense warmth and an all-encompassing feeling of love all around me, as if I was getting the biggest and best hug of my life.

Eventually, I started to shake out of it. A thought popped into my head: "Wait, you're not in bed. Weren't you just biking? Am I dead?" It yanked me out of my comfortable bed of hugs and I woke up in an ambulance, strapped down on a stretcher in a head restraint, with at least three people hovering over me trying to figure out if I was still alive.

It was a mad dash to the hospital, but luckily we were less than 20 blocks away, so it didn't take long. I was in and out of consciousness. I remember a slew of doctors and nurses poring over me. I don't remember getting scans, although they said I did. I do remember them saying, over and over, some version of, "I can't believe she's not dead."

Eventually, the flurry of doctors around me subsided. I wasn't dead. I didn't even have any broken bones, aside from my nose and a tooth that had been knocked out. The entire right side of my body was covered in road rash. The best I could surmise was that I was struck by a car on this relatively empty intersection and flew headfirst into the concrete while my bike got tangled in my legs. The firemen who arrived first on the scene were called by another car who found me in the street unconscious. I assume the car who struck me left me there to die, which unfortunately is not uncommon here.

As the pain medication and adrenaline faded, my fears rose. How was I going to pay for any of this? What happened to my bike, which was my only mode of transportation? How was I going to work if I couldn’t even move my neck or walk properly? This was the first time in 27 years being alive that I had been fully incapacitated.

Within 24 hours of learning about the accident, a friend of mine had created a GoFundMe page to gather funds that would sustain me over the next months I’d need to recuperate. This was before crowdfunding had become the common solution to a social system that would rather leave people poor and houseless than to help them monetarily. You know those people who say, "I never ask for help, but I always give it?" I was their queen. I don't say this to brag—I actually think it's a debilitating way to live. When you refuse to let people give you the same kindness you give them, it not only heavily taxes your resources, but can leave you feeling resentful and in pain.

For the first time in my life I had to learn to lovingly accept help because I had no other choice. It ended up being the best thing that has ever happened to me. When you are perpetually the "strong friend," you can find yourself in the position I was in prior to my accident: working non-stop for your survival and your community, and in lots of chronic pain, feeling like you'll never get the help you need because you're too terrified or feel too unworthy to ask. In fact, I had been in chronic inflammatory pain for so long prior to this accident that I had all but given up hope that I would ever be pain-free.

“”
For the first time in my life I had to learn to lovingly accept help because I had no other choice. It ended up being the best thing that has ever happened to me.

I Learned How to Let Myself Be Loved, Thanks to Some Generous Strangers

Within a week my campaign had surpassed its goal, funded by a community once and even twice removed from me. I‘d been working consistently and without any significant breaks since I was 14 years old. The GoFundMe gave me something I’d never conceived of having: time and support. I was able to get physical therapy that addressed pains both old and new. It took about eight months to recover enough to have enough mobility and functionality to work again, and during that time I found countless wells of resources in friends, family, therapists, medical professionals, spirit workers and, most importantly, within myself.

Even if it had to come painfully, the biggest lesson I learned is that when you love people, they love you back. For the first time, I was thrust into a position where I had no choice but to trust others, and in doing so I liberated myself from feeling like I had to do everything myself, boundaryless and in pain.

Now I do work that I absolutely love, I’m in less pain than I was even before the accident and I have more trust in the universal rule that what you invest into this world will come back to you. I wish I could say I could have found this out without getting hit by a car, but as a perpetual learn-the-hard-way type, that’s apparently what it took. The body, like the earth, is truly an amazing vessel that wants to heal. The only question is, will we provide the right conditions to make that healing possible?