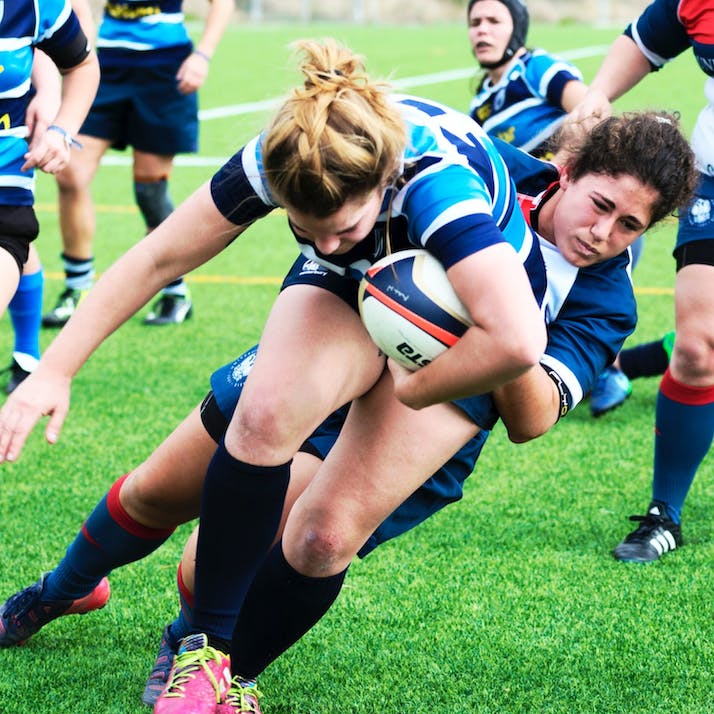 We Are Enough: The Uphill Battle of Being a Female Rugby Player

My journey as a rugby player—from childhood to the national squad—has been filled with the everyday battles that come with being a female athlete in a male-dominated sport.

Before the pandemic arrived, I was traveling back to university on a train. I’d been at national training camp, so I was fully kitted in branded athletic gear and hefting matching bags. Sitting opposite me was a congenial elderly gentleman, and during the ride, we struck up a pleasant conversation. Having spotted my clothing, he asked what sport I played.

“Rugby?” he repeated, in case he hadn’t heard me right. His facial expression was somewhere between incredulity and indignation. “Women’s rugby?”

When I confirmed that yes, that was indeed the case, he shook his head in dismay.

“Ach, I thought it would be hockey or netball!” He looked around, searching for the right words. “I can’t say I quite approve of women’s rugby. I certainly can’t watch it. I used to play rugby myself, but I just don’t understand why a young woman would want to play such an aggressive sport!”

“”
I didn’t come to rugby expecting that I would have to repeatedly explain and prove myself.

I’m never sure which part to take offense at in these situations: the insinuation that women don’t have the same feelings and emotions as men (let me assure you, I want to tell him, that women can get just as frustrated and angry as you), or the implication that rugby is somehow a brutal or violent sport, and that women should not relish its physical challenge.

I didn’t say either of these things, as I’m aware that the older generation has grown up in a slightly different world, and I wasn’t about to berate a friendly old man on a train anyway. The bigger problem is that these assumptions persist beyond the well-meaning consternation of elderly citizens. They exist—thrive, even—on a level above the individual, enshrined in media coverage, funding allocations, prize-givings and representation on high-level sporting authorities. As a female rugby player, I have to endure both the comments, ranging from surprise to scorn, and also the everyday refusal to see women’s rugby as a performance sport worthy of respect.

I didn’t come to rugby expecting that I would have to repeatedly explain and prove myself. I grew up in a rugby-mad family. My parents regularly took me to watch our national (men’s) team, and they didn’t bat an eyelid when I took it up at the age of 11. In fact, it seemed the natural thing to do. The thought that playing the sport I loved could be considered by some as unnatural never crossed my young mind.

I first experienced resistance to the idea when I hit puberty. Those are the teenage years when even the most thick-skinned and confident children—and I was far from one—become self-conscious of their bodies. Young girls are still pressured to conform to an ideal image that is thin (but not skinny), tall (but not gangly) and pretty (but not self-assured). A body built for rugby—a sport that necessitates both strength and speed—is not deemed “feminine” enough. I became ultra-aware of my “thick thighs” and “manly arms,” physical qualities which were the result of hard work and training, and which allowed me to excel from my small local club to the national squad.

Although it was rare that I was openly mocked at school (or later university), the stereotypes I encountered were enough to reinforce my concerns about my body. I was asked if all female rugby players were lesbians, and if we took showers together after games. Boys challenged me to arm wrestling or push-up competitions, which were a source of great amusement for them—at least until I won. I was told I couldn’t possibly wear strapless dresses because my shoulders were too broad and developed to be “attractive.” On the other end, boys would mime shock upon finding out about my sport, and tell me I was far too pretty to be a rugby player—a back-handed compliment if you ever heard one. I was told, implicitly and explicitly, time and again, that a strong, powerful female body was somehow at odds with a beautiful one.

Women’s Rugby May Finally Be Getting the Respect It Deserves

This message has been challenged in recent years by women in all different sports. Last year was a pivotal one for women’s rugby in particular. In August, Ireland Rugby launched their new Canterbury kit, modeled by international men’s players and professional female models. Choosing nameless models instead of their own international women’s team sent a message loud and clear to fans: that the female players were not pretty enough or famous enough to advertise their own jerseys.

In years gone by, this kind of everyday sexism in sports marketing and the media industry would have gone unnoticed, or at least unmentioned. Instead, this instance sparked an online backlash, with rugby communities around the globe using the #IAmEnough hashtag to call attention to injustices, both big and small, that female players face on a day-to-day basis. The campaign demanded that female players be valued just as much as their male counterparts. As a result of public pressure, Canterbury issued a statement committing to use female players in their advertising going forward, and the Ireland women’s team have since received the launch and publicity they deserved the first time around.

Women’s rugby is one of the fastest-growing sports worldwide. It’s empowering. Like many others, it teaches teamwork, respect and determination, but it also teaches young girls to be strong. My parents’ support let me know that I could do whatever my brother could do, irrespective of my gender. I have had to hold onto that support throughout my sporting career thus far.

As a teenager, I realized I would never achieve full professional status as an athlete. Although I had been dreaming of representing my country for as long as I could remember, I knew that my gender precluded me from playing full-time. Almost all female players hold full-time jobs alongside their rugby careers. (The leading exception is England, who fund their women’s XV team as full-time professional athletes). I have been repeatedly reminded that the powers that be view women’s rugby as simply an inferior version of the men’s game. Female rugby players are expected to train with the same intensity and commitment of male players but without a fraction of their pay. I am a member of a national training squad and a leading Premiership club, yet the match fees I receive are not enough to even cover the cost of driving to training.

“”
The movement lets every young girl know that different body shapes and sizes have different purposes and strengths, but equal value.

Those who object to equality point to revenue and economic drivers. They say that women’s rugby just doesn’t bring in enough money to justify financial support. But how can a sport garner fanbases and crowds when it’s not shown on live television? Or when their own players aren’t used in advertising campaigns? Or when they don’t even have their own merchandise made available to buy?

The New Zealand Black Ferns are the most successful rugby team in the world, ahead of their male counterparts, the All Blacks. Yet the official New Zealand rugby store, run by the sportswear giant Adidas, currently sells 159 items of All Blacks kit and only four Black Ferns items. The disparity is beyond belief.

Campaigns such as the #IAmEnough movement are crucial for the professionalization of women’s rugby, but also for the wider health and wellbeing of female athletes and young women. They announce that everyday sexism, especially in the media, will no longer go unnoticed or uncommented upon. It will be called out, and those supporting it will be held accountable. The movement lets every young girl know that different body shapes and sizes have different purposes and strengths, but equal value.

I wonder, if this kind of attention had existed when I was 11, if I could have dreamed realistically of being a professional sportswoman. If I would have loved my body as a future international athlete’s, rather than hiding it beneath baggy clothing. But I will settle for the fact that progress is here now, slowly but surely growing traction. And that a young girl can turn on the television, or read a newspaper, or open social media, and see relatable and inspiring role models—and dream of being there herself one day.