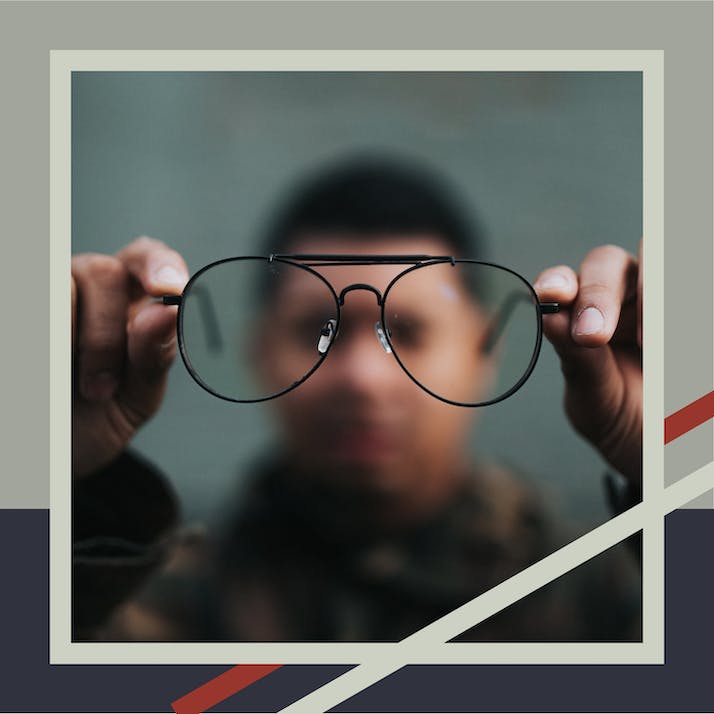 My Father's Blindness Has Changed My Perspective on Life

As I awaken each morning, my eyes open to a blurry view. The softened edges of my surroundings are washed with unfocused light. I take a moment to lay in the fuzziness before I reach for my glasses and begin the day. No matter what state I am in, in the morning—perky, lethargic, hungover—that moment humbles me. Like many, I have myopia—a vision disorder known as nearsightedness. The blurriness reminds me of how easy it is to be debilitated.

Myopia, of course, is a widespread disorder. Millions of people have some degree of nearsightedness, donning glasses or contact lenses each day in order to interact with the world. Often passed down through some combination of mutated genetics, it tends to affect many members of a family at some point in their lives. This is true for me and my family, our conditions ranging from common to high-degree. While the rest of us have easily addressed it, my dad’s case is more complex. Through an extensive traumatic period, he became irreversibly blind, his journey telling a story of lost vision and hard lessons.

My Father’s Transition to Living Blind

My father’s visual deficiency stretches back to his childhood. During his teenage years, he wore thick-rimmed glasses, their round, heavy frame pressing into his nose bridge. Without them, he couldn’t focus on anything beyond a few inches from his face. He wanted, like most of us, to restore his sight. In 1995, he underwent corrective eye surgery to reshape his cornea. At first, it was successful; his myopia was effectively treated. But his underlying glaucoma, unbeknownst to all until after the recovery process, worsened. A long string of rescue and additional corrective surgeries followed, creating an archive of scars and recoveries. Ultimately, this turbulent course ended in 2010—he was officially blind. The intervening steps were not enough to correct this trajectory. Over time, his sight diminished until only a generic gray remained, like the uncolored slush of snow eroded by traveling footsteps.

He has recounted this story to me several times, inflected with a tone of regret. He usually speaks with a matter-of-fact tone, but occasionally, a wistful sigh escapes. When he does, he’ll linger most on his initial decision to undergo surgery. Should I have done this at all, he poses as I listen quietly. Where did I go wrong? If either of my siblings or I mention laser eye surgery, he bristles, affixing his adverse result on us like a warning label. Scarred by his own harm, he protests in order to protect despite how safe the procedure is today. In his time, it carried higher risk; now, it is commonplace.

“”
He refuses to let his blindness define him.

Soon after his becoming blind, my family and I adapted the home to be more blind-friendly. We organized our efforts around my father’s memory of the layout, like decluttering the common hallways and strictly organizing the kitchen. I was encouraged to see how he could maintain some agency when moving about, borne of years of lived experience. (This is why we can stumble, drunk with sleep, to the bathroom at night without a second thought.) But despite his intrinsic map, he still needed to form new habits. A toothbrush had to be placed in a specific direction; freshly washed dishes were arranged in the drying rack to avoid sharp edges; paper bills were folded based on their denomination. These measures represented his pragmatic approach, a means to an end no matter the difficulty.

With the private interior under our control, the public exterior—unpredictable and irregular—was next. I became hyper-aware of every step or slope; any obstacle on the ground, like an errant rock or uprooted piece of sidewalk, that I would otherwise avoid without a thought became a potential tripping hazard. When we would walk together, I would guide my dad, acting as his eyes. Instead of watching distant buildings, I focused on the immediate ground before us. Occasionally, I would say, “Step up on this curb,” or, “The next set of stairs has five steps,”—moving through space was reduced to mechanical instructions. Now living away from my parents, I notice any manhole that is slightly ajar, a loose cobblestone or a sidewalk curb whose delaminated steel face juts out—urban dangers that remain as visual texture for most. Whenever I visit home, I resume the same role, guiding with my eyes cast downward, his inward.

He refuses to let his blindness define him. Ever practical, my father still works as a physician while blind, albeit at a slower and more intentional pace. Guided by routine, he implemented workarounds like training his short-term memory and delegating more on others. He listens and memorizes each appointment and dictates key points back to his assistants to record. He had to adapt and quickly, for there was still work to be done. When I can, I aid in quotidian tasks like checking and reading aloud emails and reviewing recent financial activities. These seemingly benign new roles became portals to parts of him that I would not otherwise directly encounter. Relaying aloud each month’s gain or loss, a newly incurred debt or an email bearing a difficult subject were often uncomfortable exposures—news that we learned together in real time. It dissolved the mirage of the fortified parent and instead laid bare his vulnerability

I Learned the Value of Physical and Emotional Touch

I quickly learned how physical, for my dad, things became. The textures of everyday objects became apparent, his hands taking the place of his eyes. Each time we go grocery shopping, he handles the cart, and I will pass him various foods for him to handle and evaluate. I know he was never a big shopping enthusiast, but I want him to be engaged. This apple is too soft, he will say. This egg is cracked; go get another carton. When we pay and leave the store, he will insist on carrying the bulk of the weight, partly out of desire to help but also, I suspect, to occupy his hands. These handy tasks were a way to keep nimble, exercising his other senses when one was lost.

But the most intimate form of this physicality was his grip on my arm when walking. This grip could take on different configurations: a solid, clamped hand; a few loose fingers; linked elbows; a clasp on my shoulder. In one touch, I would try to detect his overall mood—a firm hold could indicate nervousness or unfamiliarity, a loose one could mean comfort or aloofness. If it was cold and windy out, he might extend his hand into a pocket and we would essentially hold elbows. I felt these moments were glimpses into his mind that would otherwise go unnoticed—so much of what we emote in a day goes unspoken. While these micromoods were minute, I felt more closely connected to the thoughts lingering behind his visage. Now whenever I see him, I notice his gestures more and study his face longer, yearning to learn from this wordless language.

In December 2020, we were walking to a restaurant for dinner. While my parents had been before, this was my first time. Approaching an intersection, I pulled myself forward, planning to cross the street. The closer I got, the harder my dad pulled back. I urged him to come with me, but he wouldn’t budge. Finally, when the light turned red, his grip softened. Frustrated, I turned to face him. The restaurant is on this side of the street, he said and led us in the right direction. Despite the darkness, his inner compass still points north.

“”
Despite the darkness, his inner compass still points north.

I Started to Become More Present and Mindful

Being the son of a blind father has been and continues to be a lifelong lesson. It inspired me to learn about and advocate for disability rights. Tactility and materiality are important components of my professional work as an architect, where I create space for others. I have learned to not only see things more intently but also to listen closely, smell acutely and taste fully. How I take in the surrounding world is influenced by both his blindness and my own desire to consume everything in case I suffer the same fate. I am nourished by the tinge of orange zest, the crusted faces of old brick and the faint sweetness of a springtime wind. I am driven to feel whole through all my senses in fear of losing one.

Now every morning when I awake, I embrace the blurriness. The haze is comforting, a respite from the hyperrealism of corrected vision. It soothes the mind to pull back from hard lines and sharp edges and instead wade in a soup of light and shadow. By focusing on this softness, I go about my day with clear sight and intention. But by the end, I anticipate returning to the blurriness, like a sun setting beyond the horizon, out of sight.