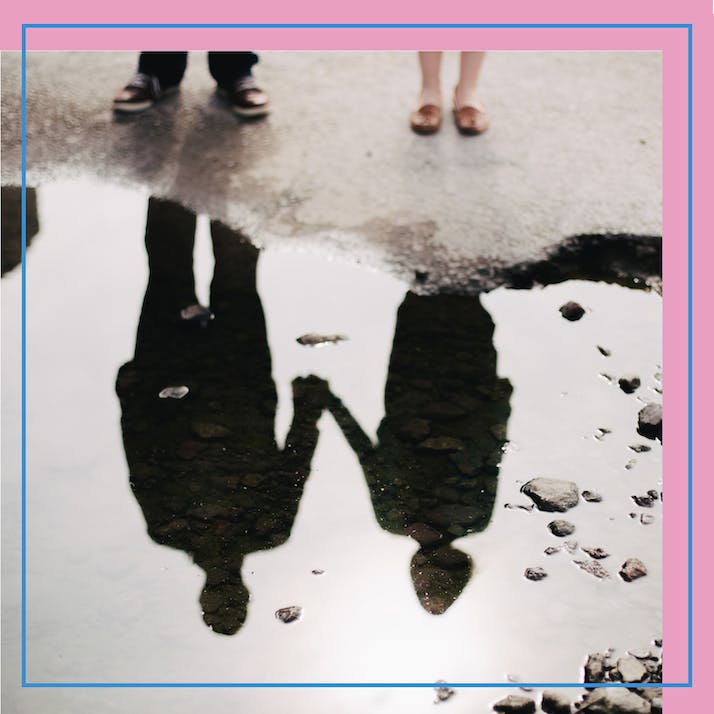 It Took Eight Years and Two Breakups to Save Our Relationship

My partner and I don’t have a conventional relationship, and that works just fine for us.

One night, while we were reading on opposite ends of the couch, my partner, let’s call him Isaac, said the words that ended our relationship of six and a half years: “I just can’t let it go.”

“The kid thing?” I asked, but I already knew the answer.

We’d talked about kids on our first date—he wanted them, and I didn’t. I told myself maybe one of us would change. Maybe once I had healed my trauma and established my writing career, I’d decide that I wanted to be a parent. Maybe once Isaac had a dog and a demanding work schedule, he’d decide that he didn’t. Instead, a couple of months shy of my 40th birthday, it finally broke us. At least, that’s what we told ourselves.

It ran deeper than that—to our roles in the relationship, our autonomy, our conflicting ideas about gender—but neither of us had the language or framework to articulate that, so we fought about kids.

“”
I wondered why I’d spent so much time and energy in pursuit of “the one.”

Before I’d met Isaac, I’d been single for nearly a year, a year in which only one person had shown any romantic interest in me. I’d worried that my sexual and romantic life might be over, a prospect that, at the time, felt unbearable. I’d been raised to believe that love was the most important thing, that when I found “the one” they’d be my purpose, my center.

When Isaac and I broke up, I again faced the possibility that I could be single for the foreseeable future, but this time, it felt fine, even a little exciting. Over the previous two decades, I’d dated five people for at least two years a piece, and I’d lived with each of them. I was tired of trying to mold myself to other people’s preferences. I found I enjoyed living alone, free from judgements or expectations. I wasn’t expected to take care of anyone but myself. It was wonderful. A friend who visited that summer said, “Single looks really good on you.”

I began to imagine what new shapes my life might take. I wondered why I’d spent so much time and energy in pursuit of “the one.” I’d never really believed that we all have a perfect match, and yet I’d felt compelled to find a person to permanently and singularly attach myself to. I didn’t want that anymore, but I realized that permanent celibacy might not be for me either. I decided to explore other options. I looked into swinging but was disappointed to find that swingers tended to come in pairs, and besides, even the fantasy of sex with strangers was completely unerotic to me. I tried books and podcasts about group sex, kink and open relationships.

One day, on a relationship advice podcast, the host described an arrangement Bill Gates had with one of his exes: Regardless of who they were currently dating, Gates and his ex met once a year for a weekend getaway. “People can do that?” I wondered.

Before Isaac, my relationships had ended in betrayal or cruelty, and I moved on as quickly as possible. But Isaac had been kind and compassionate to the end—and in the months since. There was still deep love between us. I began to wonder if we could keep that love while also allowing each other to pursue the things we couldn’t give each other.

Curious about what love could look like free from the confines of monogamy, I read The Ethical Slut and listened to the Multiamory podcast. I attended a local polyamory discussion group. I took time exploring my needs and desires. I began to think about my dating history differently. I’d built a life with five different people. It began to seem more like a technicality than a meaningful distinction that I’d loved and been intimate with people sequentially rather than simultaneously.

Viewing myself through the lens of any one of my past relationships presented a skewed picture, one in which I looked gay or straight instead of queer, where certain parts of my personality were amplified and others receded. In friendships, I knew that I needed a variety of people to support me and share different aspects of my life, but I’d never previously thought of romantic relationships this way. It began to seem strange that I’d expressed love by trying to control someone’s connection to others.

During all of this, Isaac and I still hung out, but we never talked about getting back together, until one night about nine months after the breakup. I don’t remember the conversation leading up to it, but I found myself screaming at him that he was an idiot. I told him that he loved his independence, that he didn’t have the time or emotional energy for kids and that he’d thrown away what we had for a hypothetical. I watched him crumple under the weight of my words. He left in tears. After that, I avoided him for a few weeks until he texted me that he had “things to say” and wanted to say them soon.

I asked him to meet me in the park. I was nervous. I wanted to be able to move while we talked. It was a warm, sunny day, and the trails were crowded, but it had also rained recently and they were studded with muddy pits. We kept having to pause to let people pass. Isaac started by telling me he’d decided he no longer wanted children. While I was still trying to absorb that, he said he wanted to get back together. I had expected criticism or an announcement that he’d met someone else. Instead, he said that he was refocusing on his writing and his relationships and that he was looking for a new job and hoping to move away by the end of the year—unless I wanted to get back together. I was confused. I still loved him, but I wanted all these other things, things I’d so far explored only in theory.

For the next four weeks, we met up every few days to talk. I told Isaac about how much I liked living alone, how I was rediscovering my queerness, how I wanted to explore polyamory. He talked about how he’d realized he wasn’t making time for the things he cared about, how excited he was about the idea of living in a bigger city. He texted me inspiring quotes by Louise Gluck and Leonard Cohen.

“”
I was confused. I still loved him, but I wanted all these other things, things I’d so far explored only in theory.

Our Relationship Looks Much Different Now, but It’s Better Than Ever

Excited by each other’s growth, we started dating again. Isaac was sweet and thoughtful. He respected my autonomy and didn’t push for too much of my time. We went ice skating and out for delicious meals. We talked with an intensity and mutual patience that were completely new to us. But despite all the communication, our relationship took on an uncomfortably familiar heteronormative shape. Isaac paid when we went out. I cooked for us when we stayed in. We didn’t see anyone else. We had conventional missionary position sex. We were talking about doing things differently, but what we were doing felt depressingly familiar.

After a few months, I ended things again. I told him it was because I was “more queer than I’d thought.” I wanted to live in a way that didn’t align with gender norms or cultural expectations. I wanted to date women, but more than that, I wanted to love on my own terms.

I thought he’d be angry. I thought he’d never want to talk to me again. Instead, over the next few weeks, he reached out consistently to ask how I was doing. He asked about my queer identity and my experience as a woman. He spoke to me openly about his grief over the loss of the relationship but also his hope that we’d be able to stay friends.

When we were dating, he’d presented me with an upbeat, unfaltering optimism, but once we fell apart again, he let himself be vulnerable. I found that openness irresistible, and one night, about a month after the second breakup, he asked if he could kiss me goodnight, and I said yes. That was four months ago. In the time since, we’ve built a structure that is purely our own. When we’re physically together, we’re deeply engaged, and when we’re apart, we give each other lots of space. I’m dating two other people in addition to Isaac, and he’s actively looking for jobs in a city two hours away. We’ve agreed that we’ll never have kids and never live together again. Sometimes, it’s scary to love someone in a way that is so unentangled, but it’s also the best relationship I’ve ever had.