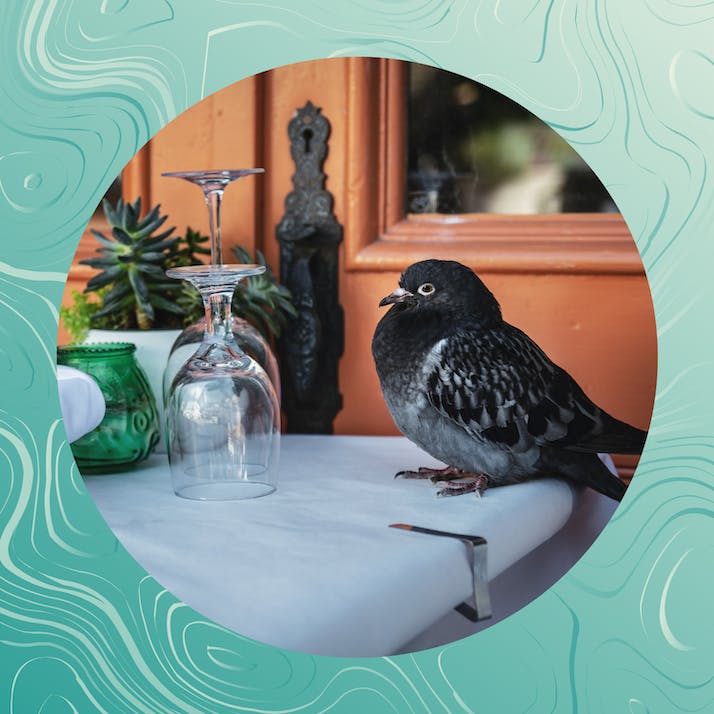 Who would have thought that eating pigeon would not only help you reduce your carbon footprint, but also provide an affordable food source?

I write of a subject askew from the usual passions and pastimes of a 37-year-old heteronormative Canadian male. It pertains to my most beloved of feathered friends, the Eurasian Rock Dove, otherwise known by their street name: the pigeon.

Yes, you read that right. Pigeons. I know you may be thinking, “Sky rats?” But, I assure you, there is a good reason why I’ve come to love these birds—the fact that they’re delicious completely aside.

I haven’t had a television in 20 years, much less cable. I haven’t played a video game since Mario 3 came out on the original Nintendo.

As a teen, I began to dislike what reality TV was producing and basically stopped watching television cold turkey. Then, I started a Christian metalcore band, eventually touring across Canada multiple times.

I found out at 34 that I’m on the autistic spectrum: My love of music, touring, people and excitement mixed with things I could never figure out all came together—along with why I wasn’t really all that drawn to the same things my peers were.

Most of my interests are all that “normal.” Hopefully, with this in mind, pigeons as a passionate pastime doesn’t seem quite as off-kilter.

“”
There is a good reason why I’ve come to love these birds—the fact that they’re delicious completely aside.

Now, with our world seeing some major hurdles of late (and the environment being front and center for everyone), personal responsibility was getting loud in my mind. I began looking for ways to reduce my carbon footprint, get back outdoors and maybe find ways to catch my own food. What could I do if driving less wasn't an option?

The seed was planted and I went to work looking for ways to enrich my life, my eating experience and reduce my reliance on factory farming.

I was a Boy Scout, ate game meat in our hometown of Prince George and, occasionally, got called to help someone from church butcher a deer or a moose. So, I knew there were other ways to get animal protein than the supermarket. But, alas, hunting was not mom-approved.

Not having a firearms license or a freezer for larger animals—not to mention Canada’s conservation guidelines hunters must abide by—attempting to hunt for my own food seemed like it was right out the window.

Deflated, I turned to the internet.

Down the YouTube rabbit hole I went, eventually coming across some wilderness survival videos. I quickly discovered an American gentleman who wound up hunting and eating three pigeons he brought down with a slingshot. This is about when my ASD’s “hyper-focused-very-specific-interests-algorithm” fired up.

“You mean pigeons taste like steak and no one cares a lick about them at all?”

The pilot light was lit.

I learned quickly there are no rules about hunting or trapping pigeons in my city. They are pests and the government doesn’t really worry about it. When I began keeping the birds, I learned about the Canadian Pigeon Fancier’s Association and joined.

I also discovered how damn tasty these birds are. They’re AAA-grade beef with wings and, like duck, it can be served medium rare without issue. My first few birds were caught wild and I had no intention of keeping them, just harvesting and eating them. It didn’t take long before I realized that despite how delicious these birds were, hunting them was a lot of work for only a couple kills per hunt.

At the time, my roommate and good friend suggested we try and catch them with nets. I was skeptical at first, but we had found a good spot to try it out and the results were spectacular.

I quickly built a coop in the garage and went about catching the first 50 birds in a two-week span. Catching them and keeping them to fatten them up became the new modus operandi.

After about eight weeks, every bird had doubled in size and I knew I had something unique and delicious on my hands. I’ve only had one pal dislike the taste but, that time, I failed hard on the cook.

Out of the first 50 birds, 34 were made into meals for me, my partner and our friends—all while building, expanding and making the coop better and better. The remaining 16 are our core flock and they keep the newbies in line pretty good.

How does this tie back to that personal responsibility? Well, after learning all the things I needed to keep pigeons, I stumbled across something I had completely missed: The second-largest account for greenhouse gases affecting our climate today is, oddly enough, cow burps.

Methane is second only to combustion pollution for carbon in our atmosphere.

This got me thinking about what it takes to get a cow ready for slaughter versus a pigeon. Doing a pound for pound quick calculation, I discovered that one pound of pigeon meat has about 1/1000th of the carbon footprint of a pound of beef. Feed, water, housing and electricity and cost per cow versus a pigeon: Suddenly it felt like I was making a really noble choice.

I’ve had vegans and vegetarians approach me, conflicted, but we always seem to come to an agreement that this is a good way to be personally responsible for the climate. A big bonus is it allows me to advocate for a middle ground where our dietary choices can maintain dignity while also reducing our individual carbon footprint.

It didn’t stop there. I also discovered these little birds also have up to 24 young a year. That’s about the same rate of bunnies, and we all know the saying about reproducing like bunnies.

Not only had I stumbled into an intensely-focused interest that satisfied my need for purpose on multiple levels, but it was also entirely sustainable environmentally, it reduced my personal carbon footprint immensely and opened me up to you, dear reader.

Killing for Your Meals Isn’t Easy

There are some unsavory aspects of keeping pigeons, no doubt about it. First off, hunting isn’t for everyone. Killing your food doesn’t feel cool. You don’t feel like an empowered dude when you end your pigeon’s life to make food. You remember their names and handling and cuddling them. You made sure they were happy and had places to lay eggs, have babies, eat like crazy and be safe. Then you take your sky buddy’s life as swiftly and painlessly as you can.

I can defend my right to dignity in my food for all the reasons above, but I defend it first by caring for my pigeons, tending to their wounds, feeding them extra well, being kind and pleasant and gentle with them, naming them and so forth. In the end, you make sure they aren’t slaughtered by someone they don’t know, because I learned that giving my birds dignity in death is the least I can do.

“”
Not only had I stumbled into an intensely-focused interest that satisfied my need for purpose on multiple levels, but it was entirely sustainable.

My Search for Affordable Food Has Turned Into So Much More

If you choose to take up hunting and keeping pigeons or you choose a diet free of products made from sentient creatures—whatever your reasons are, I hope we can find those common intersections, especially during a pandemic like COVID-19. Much like pigeons, the better we work together as a community or flock, the better chances we have of surviving, thriving and having beautiful families of our own.

Eating pigeon may seem odd or downright grotesque in this time and age, but the more you learn about pigeons and their history with us as humans, the more and more factory farming and diseases blooming in those environments seem to make choosing alternative meat sources a whole lot easier. Icing the cake with a deeply dented carbon footprint and unexpected respect between dietary camps certainly sealed the deal for me.

My partner and I are building a greenhouse and we intend to use bird droppings as fertilizer to grow even more of our own food on our deck and in the yard. The entire idea to do it at all never would have come up without her asking me, “Well, what are you going to do with all the poop?”

While the idea that this could be egalitarian sure seems tempting, please keep in mind this was all information and knowledge I stumbled across trying to find more affordable food. I didn’t decide on pigeons as a fundamental dietary inclusion because of all the above, I found out along the way. And if there’s any takeaway, for me, it’s that we are all learning as we go—no matter our dietary choices. That realization has led to amazing interactions across the world—ever since this pigeon thing got wings.