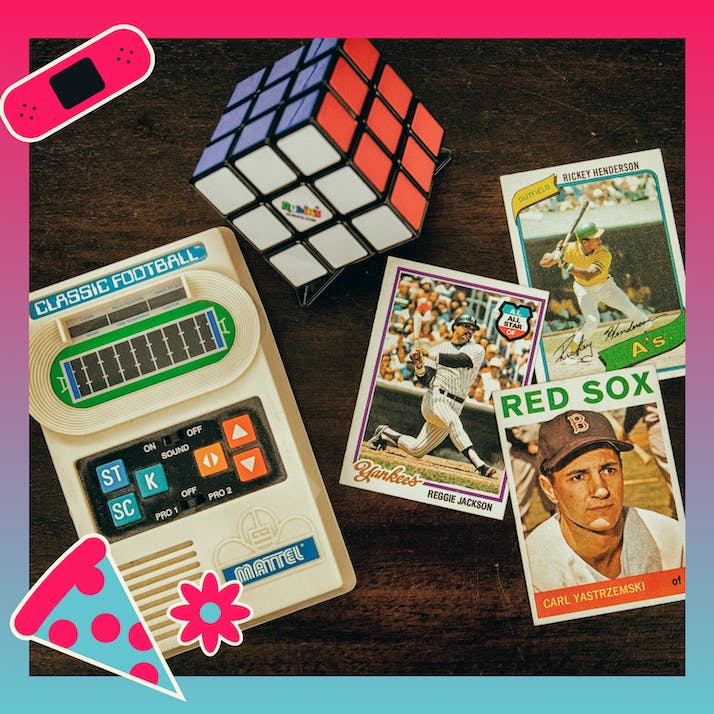 I Dream of My Pre-Internet Life

After a childhood of outdoor activities, and an adulthood adopting and consumed by screens, I yearn for the days before our technological immersion.

I was born in 1984, a time when hip-hop was emerging, synthpop was peaking, mullets and perms were en vogue and the Corvette was the coolest car in the world. It was a time of oversaturated color. I remember the brightest yellows and oranges lining the interiors and packaging at McDonald's and the rich reds and greens after getting our Kodak film developed. Long before the shrill blue of halogen lamps, streetlights left a yellow halo raining down as day transitioned into night.

I've been returning to this place a lot lately. As an artist, it's a well from which I draw significant inspiration, this time of youthful simplicity when Technicolor and Dolby sound were the technological leaders of the day. We used to play outside all afternoon on our dead-end street and at the local park.

It started with Big Wheels and Huffy BMX bikes, progressed to rollerblades and street hockey and eventually matured through lots of skateboarding on makeshift wood ramps. Throughout it all, I became intimate with the feeling of pavement embedded into scraped knees, palms and elbows, picking rocks and dirt out of patches of blood, marks of youth, subtle growing pains.

I remember when my father came home with our first computer, a Macintosh Plus. There were a few games we could play, in gray and black pixels with the big plastic mouse offering one giant control button wired to the machine. The computer wasn't super interesting at that point. It was really just a glorified word processor spitting out printed text on spools of paper with rippable holes on the sides so they'd stay aligned on the printer.

We may have had some homework assignments or projects that asked us to insert plastic disks to open applications and create digital stuff, but outside was much more magnetic, our Legos were more compelling, our new pingpong table was way more fun. Ultimately, being with people and engaging with physical objects felt right as a kid. Today, as a 36-year-old artist, it still does.

It wasn't too long until we upgraded to a newer computer. The screen became color and plastic disks turned into shiny plastic CDs. I'll never forget the day when the blue, white and yellow America Online CD came in the mail. I'd heard about it already; kids at school talked about getting online, parents setting up emails. I was confused by the whole internet thing, the modem that dinged and danged as it took over the phone line and connected to some other web.

We were given a technological gateway to step into a new world of mass communication and information on a scale seen never before. Not only was this technology a gateway, but the mid- to late-’90s was a time when our attention was quickly transitioning. We were becoming enveloped in all the trappings that AOL and the internet had to offer.

I know my parents set up email first, but for us kids, it was AIM that really mattered. (AIM was AOL's instant messaging service.) We could chat all day and night with friends and occasional strangers and discovered new ways of conversing through symbols, sound, text and abbreviations (lol, brb, ttyl).

As the internet speed picked up, we started to get free music. Winamp or iTunes were our libraries, but we could plug into LimeWire, Kazaa and Napster to download all the music we wanted from others who opened their hard drives for the scouring. I vividly remember when the first kid in high school got a CD burner and began making CD mixtapes for us. He charged $5 a mix, and we could put whatever songs we wanted on it and even make our own art for the cases.

Throughout this progression of technological innovation, I was going through my teens and discovering my sexuality, creativity and passions beyond the screen. Our family had a shared Nokia cell phone for emergencies that I started taking with me when I’d go out, but it wasn’t until freshman year of college when I finally got my own phone and began T9 texting ferociously. I developed entire relationships with crushes through those phones and the power of my thumbs.

I used to be so judgy about dating apps, heard sketchy stories about people meeting on Craigslist for sex and was generally nervous of stranger danger. But, by 2010, it was standard practice to be dating online, and I quickly joined in. With internet culture, what had previously been taboo quickly became vogue. I began meeting women online and going out on dates, sometimes just for casual sex and sometimes a little bit more, but nothing materialized into a deep, ongoing relationship. I just couldn’t imagine meeting my person online. It felt so inauthentic.

A few years ago, I got really sick and had to distance myself from screens for a while. I would feel ill when I’d open my computer, and I limited time on my phone to only what felt necessary. As I returned to connect with my authentic needs for healing and life, I met a woman at a party who became my wife. But within a year of this necessary respite from the screen, I was back, compulsively checking Instagram, email, text and Facebook minute by minute regardless of what else I was doing.

“”
I still struggle to control myself and put it down or keep it away.

I recognize the addiction, the habit that feels all too natural—to reach into my pocket and grab the phone, to keep it next to me at all times, to open it up and see what’s new even when my notifications have been turned off. I still struggle to control myself and put it down or keep it away for long periods of time.

I wish it wasn’t so difficult.

When I got sick, I also stepped away from my corporate life and became a full-time artist. I painted objects, paper and canvas with bold, bright primary colors. These shapes and colors were bringing me back to my joy before the internet arrived. Perhaps my respite is this colorful immersion that brings me back to a pre-internet age. I sit writing this in a studio filled from floor to ceiling with these colors, bursting with energy and love and holding space for a piece of me that still exists before the world changed.