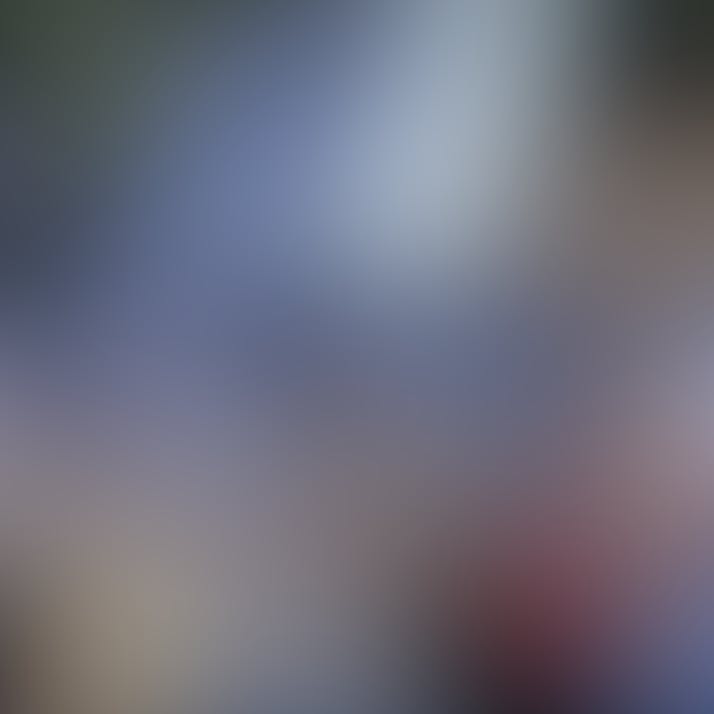 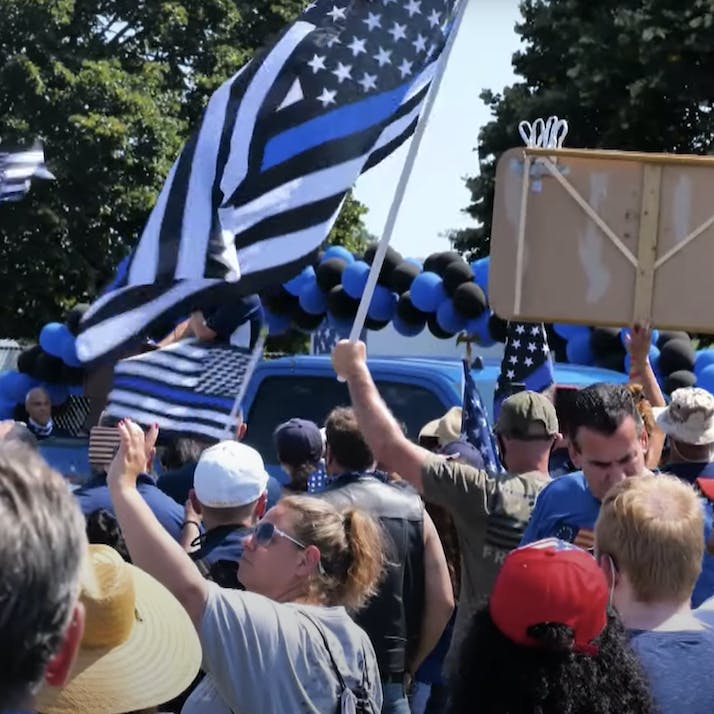 My Husband Is a Cop: Fund, Don’t Defund, the Police

The wife and daughter of law enforcement officers argues that they need more help.

I’m the wife and daughter of law enforcement officers (LEOs). My dad was a police officer and animal control officer before he lost his battle with cancer at 34. Nearly 20 years later, I am writing about my experiences as the wife of a LEO. I think back to the admiration and awe that I had for my dad and how I’ve since fallen for my own man in uniform.

My husband and I have been together since 2016. He’s worked for two different agencies during his six years in law enforcement.

What I want to emphasize here is how his heart for people—and his desire to help—is being crushed, suffocated and pushed aside due to the major political agendas that want to blame him (and LEOs like him) for society's problems instead of looking for and funding the root cause of those problems.

Specifically, my husband has a deep conviction—a calling if you will—to help people in crisis. Be it a physical crisis, a mental health episode or both, he very much wants to assist people who may feel like they have nowhere else to turn.

A sheriff department (I'll call them “the county”) is very different from municipal police (“the city”) forces. The main difference is that the sheriff is an elected official. The police chief of your local town or city is appointed by the elected officials. A generalization of the two breaks down like this: If you get pulled over in the city, the police officer will most likely give you a ticket. The sheriff doesn’t want his constituents mad at him, especially if it’s an election year, so the sheriff’s deputies most likely won’t give you a ticket unless you’re rude, belligerent or egregiously breaking the law.

Most of what I’m about to share, my husband can’t talk about. He works at the will of the elected sheriff of a rural county and would most likely be fired for what I’m about to say. Previously, he worked for a larger city with more people, more funding and, in my opinion, worse governance.

Police shouldn’t be defunded. If anything, they need more funding and better governance of how that funding is allocated.

“”
Most of what I’m about to share, my husband can’t talk about.

We Have to Buy Our Own Basic Vital Equipment

Another big difference: The county requires that officers provide many of their own supplies, like a gun, handcuffs, boots and more. In larger agencies (like the city), most, if not all of these are provided by the department. It’s a way to make sure everyone is using the same defensive and offensive gear.

When my husband went to work for the county, he was given a bulletproof vest that, according to the tag, was from the 1980s. I was stunned.

Kevlar vests expire. Technology has improved in the past forty years. My husband could either buy himself a $600-plus vest or put himself in danger by wearing an old, dilapidated one not fit for duty. He wore that vest for about four months. We were newly married and strapped for cash, but his parents were thankfully kind enough to buy their son a bulletproof vest for his birthday.

Why does a servant of the law have to provide their own bulletproof vest or wear one that’s 40 years old? Why aren’t funds allocated to buy basic vital equipment for all sworn officers?

We also live in a right-to-work state, so unions have very little power here. That can be a good or a bad thing. I believe that unions often do more harm than good. They keep ineffective officers on the streets who need to find a different career. But that also means that my husband doesn’t have access to collective bargaining agreements that would require his job to provide basic vital equipment.

It would be like asking surgeons to provide their own scalpels.

In the city, if a LEO doesn’t write enough tickets, that means the supervisor thinks they’re sitting around doing nothing. If you ask any cop, they will all sing from the same songsheet that there’s “no quota” for the number of tickets they have to write. But what happens is supervisors often use tickets as a benchmark for performance. In my husband's case, he would talk to people he pulled over, rather than charge them, then get reprimanded for not writing enough tickets.

Sometimes people are having a rough day, sometimes they’re just being stupid, sometimes you really, really just have to go.

So my husband would have to weigh: “Have I charged enough people this pay cycle to prove to the city that I’m doing my job, or should I add them to my case docket?” If he had enough, you might be lucky enough to just have a talk about why you need to slow down and get a (documented) warning.

Now I’m not saying he’s a cop who never wrote tickets—you bet he did. But he didn’t write everyone a ticket. His goal was to try and find out why people were breaking minor laws and see if he could talk to them about why they need to follow them instead.

When someone calls 911, they may be at the lowest, darkest or scariest point in their lives. Add possible mental instability, alcohol or illegal drugs into the mix and a domestic disturbance, public intoxication or traffic stop can turn dangerous really quickly.

According to a poll by Gallup, nearly 20 percent of Americans report using some kind of mood-altering drug almost daily.

When an officer answers a call, he/she has no idea what is going through someone’s mind. My husband has personally dealt with people who were seeing things, kids who want to kill themselves, a pissed off lady waving a gun at him (she was about 80 and almost got shot) and has had to detain violent homeless men who probably had no idea what they were doing.

So, in my husband's six short years, he’s realized that he needs a better understanding of mental health issues in order to help. He’s taken verbal de-escalation classes, mental health certificate courses and counseling classes just so he could be better equipped to help people.

When he worked for the city, they did a lot of internal training. Every month, they had required in-service training where they would do classroom and/or physical continuing education. He would even train outside of work and the department would pay for it. Now, in the county, they have a near-zero budget for training. He doesn’t have in-service training anymore. If my husband wants to better himself, he has to take off and pay for the class himself. The only “support” of the department comes in the form of a pat on the back and a reminder not to ask for more time off because he takes off too much.

Add on top of that the LEO mental health crisis. An alarming rate of current and former LEOs are committing suicide, suffer from PTSD, or have poor mental health because of the stigma related to admitting you are not okay. So my husband has decided he wants to help first responders with their mental health issues too.

When there is a bad call, my husband is the one that will set up a meeting, grab some coffee and snacks, and sit everyone down to talk about what happened. It’s a tough sell, trying to get a bunch of hard and crusty officers to open up about their feelings, but somehow he does it.

Wouldn’t it be nice if all LEOs were also trained in mental health first aid? My husband is, but he did it on his own time. He went the extra mile. How many people do you think are really going to do that?

There are tools available to LEOs to help them deal with the myriad of situations they encounter: their patrol car, pepper spray, gun, taser, handcuffs and various resources like paramedics, trauma counselors and more professionals that take things to the next level.

But when I think about LEOs and mental health, they’re like hammers: They have very blunt capabilities and limited expertise in how to deal with someone having a mental breakdown. That person needs a screwdriver, a wrench or pliers to fix their issues—not a hammer.

We’ve heaped too many responsibilities onto LEOs and expect them to have the finesse to deal with sometimes delicate and tumultuous situations that they just aren’t trained to handle. Most officers have not had extended continuing education in how to help someone having a psychotic episode, so they need to call on someone else. But when an officer does call in the professional, they often are not available in a reasonable timeframe.

For instance, a woman had a gun and was attempting to kill herself. The officers on the scene (my husband was not on this call) unfortunately failed this woman in several ways: They didn’t know trauma counselors were available to call, they didn’t know who to call, and when they finally did get in touch with a mental health professional, there was one person available for nine counties in the area. One person.

Mental health is a huge issue in our country that doesn’t get enough attention, understanding or funding. Asking someone with a gun and pepper spray to come in and try to talk someone down from a literal ledge is not what that officer was trained to do. Police are generalists. They respond to everything but need to have resources and professionals available to them. Those resources need to be readily available, not on the scene after six or 12 hours.

Are there bad cops on the streets right now? Yes. But the overwhelming majority of LEOs honestly want to help people. They want to get justice for those wronged, they want to put child molesters in jail and they want to go home to their family at the end of the day.

So instead of calling to defund the police, I ask that you consider more funding for equipment, specialized training, continuing education and more support services. All officers should be trained in mental health first aid. Every county and city should have mental health first responders with the technical training in addition to their normal police force. And officer performance shouldn’t be based on the tickets they give but the support they provide.