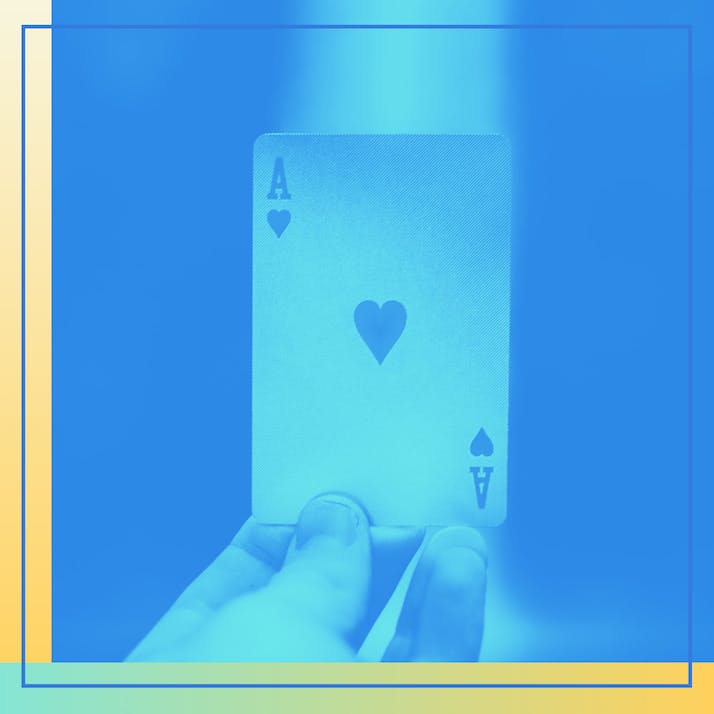 Discovering My Asexuality: The Ace Up My Sleeve

I’ve never experienced an interest in having sex, but I recently found out I wasn’t the only one.

I’d never even heard the expression before, but I suppose everything has a nickname these days. To put it more bluntly: I am asexual. It took me more than half my life to come to terms with the fact that I have no interest in having sex. I thought I was a freak of nature, a one-off, completely alone in the world. Now, I find there’s an entire community of people with a similar bent. But I have yet to share that secret—that “ace” up my sleeve—with the rest of the world.

I Didn’t Expect to Be Asexual

As a kindergartner, I was all about boys. Well, one boy in particular. Robby stole my peanut butter sandwich the first day and stole my heart. He had thick, auburn hair, glistening green eyes, dimples and a cocky smile. What’s not to love? I had a crush on Robby for six years. You might even say I was a stalker, following him around the hallways like a puppy dog, turning up at his Little League games to cheer him on, even becoming a junior ambassador for UNICEF so I could go to his house and ask for donations. His older sister answered the door and revealed that Robby liked me in “that” way. I walked off five dollars richer and a whole lot happier. But by the time we received our diplomas, my passion for Robby was still unrequited—and what’s worse, he moved thousands of miles away. I never saw Robby again.

Frankly, it was a relief entering middle school. There was a much wider pool of boys to set my sights on and, hopefully, one of them would actually return my affection. But a funny thing happened on my way to seventh grade: I lost interest in the opposite sex. In fact, I lost interest in sex, period. You’d think with the onset of puberty, my hormones would be raging. They were definitely raging for everyone else around me. Students were hooking up and breaking up on a never-ending merry-go-round, only I was on the outside, watching the carousel turn for all but me. Sure, I felt left out and longed to brag that I had a boyfriend like the rest of my classmates. I’d see them roaming the hallways holding hands and kissing in discreet nooks and thought, “Why not me?” But the thing is, I never wondered what it would feel like entwining my fingers with a guy’s or having his lips on mine.

My first kiss came at the age of 16 on a summer teen tour. It happened in Israel, when we visited an army base and fraternized with the soldiers. For a reason I couldn’t fathom, the most handsome guy picked me out of all the girls in my group and started seriously flirting with me. His name was Jacob, and he was stunning. Dark hair, hazel eyes and a confident smile. It was as if my grade-school crush, Robby, had grown up and moved to the Holy Land.

Jacob and I spent the evening chatting, and he walked me back to my hotel, a perfect gentleman. I was content to leave it there, having come away with bragging rights for landing the best-looking soldier in the entire regiment. But Jacob had other ideas. He took me in his arms and gave me a kiss. A big kiss. With tongue and all. Tongue? No one told me there’d be tongue. Was this something I was supposed to enjoy, the key to turning on my lackluster libido? If it was, I was in big trouble. All I could think of as Jacob did oral calisthenics inside my mouth was, “It’s getting really late, and we have to be up and out of the hotel by 7 a.m. tomorrow. Maybe I should pack tonight, so I can have an extra half hour to sleep in the morning.”  Hardly the stuff of romance novels. I made a few excuses to Jacob about being on a strict curfew and headed to my room. Needless to say, I didn’t get much sleep that night as questions about my sexual disinterest ping-ponged in my brain.

I returned home from that teen tour with an awareness of different cultures, and with a secret. I wanted to talk to somebody, anybody, about my situation, but fear of being ostracized kept me achingly quiet. I retreated to the confines of my room, where I read every book I could get my hands on about sex. And there were a lot of them. The Joy of Sex, Great Sex, Sex and the Single Girl, Everything You Always Wanted to Know About Sex. But for all the promises of telling me everything I wanted to know about sex, there wasn’t a single word about someone who had zero interest in sex.

“”
No amount of stimulation or fantasizing could awaken my clitoris.

For a Moment, I Thought I Was Gay

By the time I graduated high school, I had never been on a date, much less gone to prom, and was voted by my classmates as “least likely to lose her virginity.” And damn it if I didn’t prove them right. College came and went, and I had entered the workforce with my hymen intact. Many a man offered to be my first, and while it was tempting to be like everyone else, I just didn’t have the drive. Even masturbation held no interest. I tried but felt absolutely nothing. No amount of stimulation or fantasizing could awaken my clitoris. Sleeping Beauty held nothing on me.

Then the whispers started. “She’s never with a guy. She has to be gay.” I wondered: Was I gay? Did my head turn when an attractive woman walked down the street? Did I picture myself kissing any of my female friends, having their tongues in my mouth or between my legs? Umm…no. Definitely no. But, still, the rumors persisted. A part of me wished those rumors were true. At least then I wouldn’t feel like such a freak.

“”
Finally, I could come out of the closet and proclaim my identity.

I thought about the letters LGBT: lesbian, gay, bisexual, transgender. None of those applied to me. I had no community I could turn to, no pretty rainbow flag I could proudly fly. But then, LGBT took on another letter. “Q” for queer. OK, that’s better, but it still didn’t represent me. A year or two later, I saw “I” and “P” tacked on. “I” for intersex and “P” for pansexual. Nope. I was still an outcast. At this point, I gave up hoping there’d ever be a letter for me. Until one day, I happened upon a gay pride parade on the news. And, suddenly, they were talking about LGBTQIPA. Wait a minute. “A”? What did “A” stand for? Could it be…? I did a quick Google search, and there it was: “A” for asexual. I had a letter! And what’s more, there was a flag. A pretty black, gray, white and purple one! Finally, I could come out of the closet and proclaim my identity.

I was about to put down $32.50 for my flag on Etsy when I saw there was a whole subsection of asexual flags. Dark green stripes, followed by light green, white, gray and black stripes for aromantics (someone who does not experience romantic attraction to anyone). Dark purple stripes, gray, light purple, grey, and dark purple stripes for gray-asexuals (people who sometimes experience attraction but have a low sex drive). Other variations included grey-romantics (people who can enjoy and desire sex but under limited circumstances). It went on and on. Seven more flags for seven more types of asexuals. Demisexual and demiromantic (experiences sexual/romantic attraction only after a bond is formed). Reciprosexual and recipromantic (does not experience sexual/romantic attraction for another person until they know that person is attracted to them). Akoisexual and akoiromantic (may experience sexual/romantic attraction but it fades if the attraction is reciprocated). And, finally, aceflux and aroflux (fluctuates between asexual and sexual or aromantic and romantic). Whew! I went from no representation to too much! Where did I fit on the spectrum?

After a great deal of soul searching, I decided not to overanalyze it. I was asexual, or “ace” for short, and that was good enough for me. Over the course of my investigation, I learned that asexuality is a sexual orientation, just like bi, gay, lesbian and pan. I learned that love doesn’t equal sex. There are many happy relationships that don’t include sex. I still haven’t pulled that ace from my sleeve with friends and family. Old phobias die hard. But maybe if someone I know reads this, they may recognize me. And that’s a start.