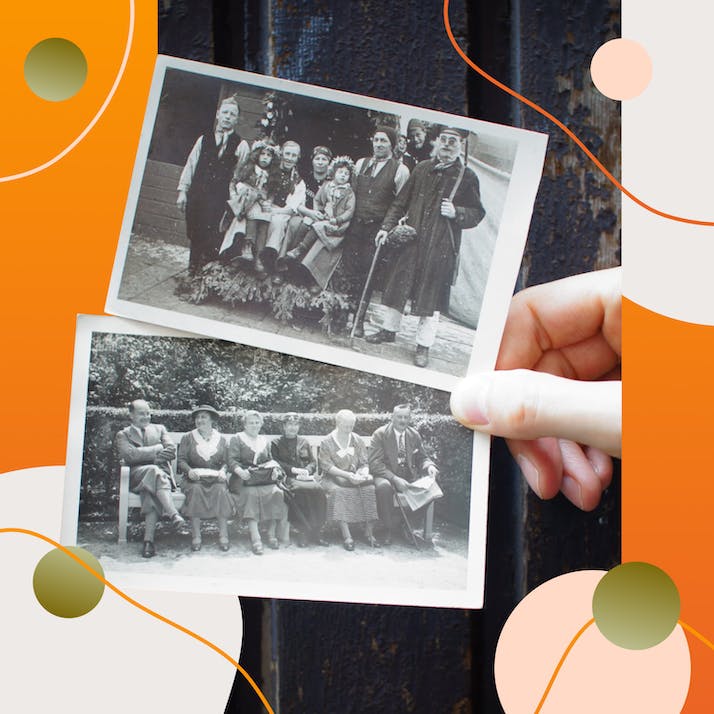 I Discovered the Family I Never Knew I Had

On a trip to Poland with my son, I found out that some of my grandmother’s family members hadn’t perished in World War II like she’d written to me.

When Grandma Regina died, I stood over her grave, my belly swollen with my son Joshua, who was born the following month. Some 21 years later, in 1992, while I walked the streets of Warsaw with Josh, now a six-foot-tall college boy, Grandma Regina’s life took on a new meaning for us.

Grandma Regina was one of eight siblings born and raised in Warsaw, Poland. All my life I was told by Grandma, in her broken Polish accent, that she’d lost her entire family in her native Poland in the World War II Holocaust.

She escaped by coming to the United States with her son, Louis, in 1910. Long before the Nazi slaughter, there was the bloodbath initiated by the violent Russian pogroms throughout the region when Poland was part of Russia. In the 19th century, when Russia took control of Poland, things started to change for the Jews. During the devastating pogroms of 1906, Grandma was terrified for her life. The horrific massacres, violence, rape and slaughter of Jews never slowed down in spite of what government officials promised.

She begged her family to leave Poland, take her advice and follow her to the U.S. When the Nazis set their sights on the country, they sought to destroy all that was there and build it up again as a colonial homeland for Germans. Regina was a stocky five-foot-one, with dark brown hair and blue eyes and an agitated personality. The Grandma I knew was short-tempered and highly sensitive to anything that could appear not to go her way or smelled of anti-Semitism.

While my relationship with Regina wasn’t close, I admired her for believing in herself and doing what she knew was right for her and taking that action. Leaving everything and everyone she knew to go to a new country far away—and learning a new language—took a lot of guts.  For that, I’m eternally grateful. I was always curious about her roots that were also my roots.

“”
Leaving everything and everyone she knew to go to a new country far away—and learning a new language—took a lot of guts.

My Son Wanted to Visit His Ancestors’ Homes

Josh had also developed a keen interest in his Eastern European roots and became fascinated with Slavic languages. So we included Warsaw on the itinerary when Josh had just completed a summer language program in Russia, where I joined him. We traveled to the Baltic countries—Estonia, Latvia and Lithuania, and then Poland.

On a lazy morning after a large breakfast, we visited the Old Town Market Place, which is one of the oldest parts of Warsaw.  As we sauntered down the street, Josh stopped and dug into his backpack.

“Hey mom, I have this address from Grandma Dorothy.  It has these names and addresses of some relatives she thinks live in Warsaw. She said she found it in Grandma Regina’s stuff after she died.”

“What? When did she give you that?”

“Josh, no one is left of her family. The Nazi’s killed everyone,” I said with authority.

“Well, let’s just see if we can find it anyway,” he replied.

We pulled out our city map and plotted our approach. The names on the paper were Januz and Joseph, with the same last name as Regina’s before she married. Clearly, these people had been relatives. After wandering around for an hour, we found an apartment building with the same address.

When we returned to our hotel later, we asked the concierge if she could find a phone number that matched the name and address. She said the switchboard was closed at night and to come back tomorrow. When we returned, I stopped by the desk again and Josh went up to our room. The concierge called again, and this time someone answered and identified himself as Joseph.

To be sure it was a relative with this name, I asked the concierge to ask the man if Regina’s name meant anything to him.

Does he speak Russian?

Could we come to see him?

“No, stay at the hotel and he will come to see us.”

I was shocked and excited and trying to stay realistic. This person might still not be a relative of my grandmother’s.

As we had dinner before we returned to the hotel, we waited in our room for what seemed like forever, but it was only one hour when the concierge called us and said:

“The man is here. He says to have your son come down with you.”

We Reconnected With Long Lost Family

I held my breath all the way down the elevator. When the doors opened to the lobby, people were milling about. I scanned the crowd, unsure who I was looking for. After the crowd thinned, my eyes fell on one person, an elderly man standing by a wall, watching people step out of the elevator. He was someone who I would have recognized anywhere. It was clear he belonged in my family. I smiled, and he just looked back at me.

He didn’t answer. He just stuck his hand in his pocket and pulled out a small photograph, pointed to the picture and looked at me. The photo was taken at my cousin Louise’s wedding. I pulled Josh close to translate.

“Tell him that is me,” I pointed, “and that is Dorothy, Rose, Josephine, Louis, my cousin Louise and there is Regina.” I told Josh to tell him the photo was taken at my cousin’s wedding many years earlier when Grandma was still alive. Apparently, she or someone else had mailed it to him.

Joseph had his arm around Josh and said to him in Russian, “What happened to Regina? The letters stopped 20 years ago. We kept writing, but heard nothing back.”

I was wondering something, too. Why had Grandma never told us she was writing to her nephews all those years? Why had she said everyone had died in the war, yet clearly, these two people had survived? The only reason I could think of was her secretive personality. She never trusted anyone! I’m wondering if she thought there was danger? But to her family? Did anyone else know about this?  And, if she had trusted us, we could have enjoyed getting to know these men. And they would have been able to know us.

It was obvious Grandma was writing to someone in Poland, her birthplace. What could they possibly do to her in the U.S.? And in terms of the language, Aunt Rose practically lives next door to the University of California at Los Angeles. I’ll just bet someone there reads Polish!

Josh was as amazed, as I was, that this man standing in the hotel lobby was a relative, discovered across thousands of miles, and a Holocaust survivor. Joseph had asked his daughter Aleksandra, called Ola, to meet him at the hotel, since she spoke English. She was a scientist for Proctor & Gamble. Ola didn’t know about the correspondence, so it had never occurred to her to look up relatives in the United States.

The four of us spent hours talking about our lives, and I shared what I knew about my grandmother.

A couple of days later, Ola invited us to Joseph’s home to meet what family members were in town. As it was summer, many were on vacation. Joseph gathered his younger brother Januz, Ola’s husband and her daughter, as well as close friends, to join together and share stories.

I learned that Joseph and his brother Januz are my mother’s first cousins, the sons of one of Grandma’s brothers and the only survivors in the family. Some siblings and relatives fought in the Warsaw Ghetto Uprising and died there. Again, speaking with Ola’s help, Joseph told us he survived the war by serving as a colonel in the Red Army.  He was very proud of that service. As Joseph was in the army, he spoke Russian and some German and jumped between all three languages, sometimes within one sentence.

Januz, who spoke a little English, told us he was 12 when the war broke out. He was taken high up into the Ural Mountains to work in a mine, which is how he survived. Today, he’s an attorney, but he’s not allowed to practice law in the city of Warsaw because he is Jewish.

Ola told us that the Nazis devised ways to keep the camps as secret as they could—they crowded people into trains to write postcards to their families, sent them to work camps and told them they would see family again after the war. This way, they dispelled suspicion about the death camps. The family had some of these postcards written by cousins, aunts and uncles who died in the death camps. It was a different story for women, who learned when the soldiers were coming and that they would be killed. Instead of suffering their fate, some killed themselves before the soldiers arrived. We saw photographs of these beautiful young women—some relatives—before the war.

In spite of the tragic stories, the gathering was very warm and welcoming. We sat in Joseph’s living room surrounded by nieces, nephews and brothers. Josh and I shared about our families and what we knew about Regina and her life. Josh’s connections to Polish Jewish roots were now a reality for him. It was normal for me to have a European grandmother to identify my lineage. But Joshua’s grandmother, my mother, Dorothy, was a modern woman with a career. My Grandma made matzo balls from scratch and created her own horseradish.

“It was amazing to find these relatives,” Josh said. “At the moment, I felt it was a blur. But once it was clear what had happened, and how haphazard and unplanned and really unlikely it was, I think it made it really incredible.”

While my mother was born in the United States, Regina from Warsaw gave me more of a connection to what happened to European Jews. Josh didn’t have that same connection, but his amazement at meeting his distant relatives, he said, brought it much closer to home for him.

While finding these relatives was a gift for me, the real gift came from Josh’s appreciation of his lineage and his sense of being proud of his heritage. He and I have a new connection that we talk about and share. I’ve even been able to stay connected to Ola. In fact, when she came to New York on business and I was living in Washington, D.C., at the time, I flew up and we spent a day together.

Another generation that was touched by the Holocaust. It’s a family I never knew I had.