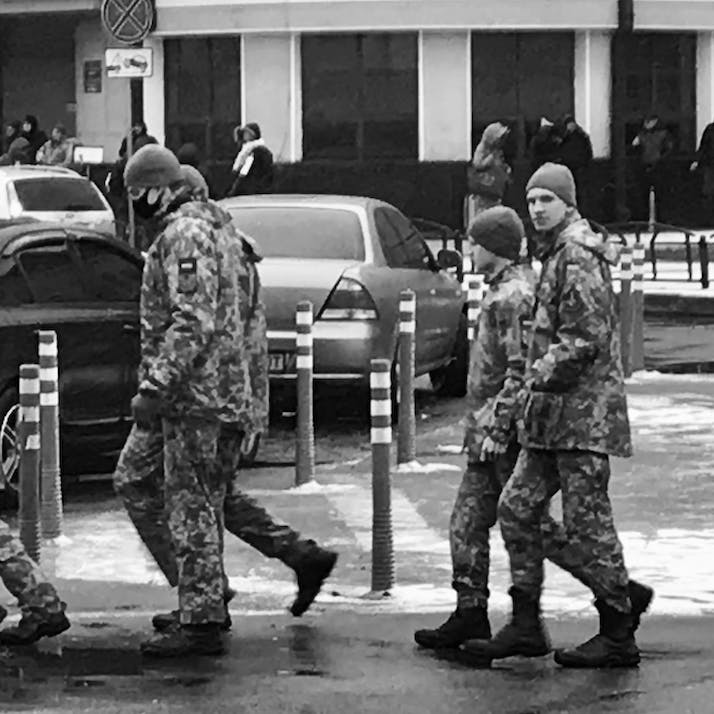 A boots-on-the-ground report continues from Mariupol and Lviv.

This is part two of a two-part series. Read the first piece here.

Dusting myself off from the robbery, I packed up a bag with my backup camera gear and headed to the eastern frontline city of Mariupol on the train. I initially stayed in a hotel with correspondents from the BBC, ITV, Radio France, TRT World and others. We shared stories at night of what we had been covering and waited to see if the invasion would go ahead as predicted.

Mariupol is a port city and therefore highly strategic for Putin. It was understood that this would be one of the first cities he would want to occupy. On my first day there, I shot raw video clips of ordinary street life, people getting on with their daily lives: buskers, young people ice skating, elderly folks feeding pigeons in parks and so forth. Even now, I get shivers thinking about how normal life in Mariupol felt before the invasion and how quickly the situation deteriorated.

Now Ukrainian mothers are giving birth in maternity wards under Russian bombs, and people have been massacred in what is being described as one of the worst war crimes of the last century.

Back at the hotel in Mariupol, I befriended Vika, a Ukrainian fixer and intelligence officer who would end up saving my life on at least one occasion. In the evenings, we chatted about the potential oncoming invasion, the disinformation campaign Putin was goading Russians and Ukrainians into believing, Russian double agents and the vigilance one needs to maintain in the field as either a journalist or an intelligence officer.

From talking with locals in Mariupol, it was evident that the majority of people didn’t want their territory to be occupied by the Russians. In 2014, Mariupol had taken the brunt of pro-Russian separatist attacks, and we visited a police station that was heavily bombarded by shelling and gunfire that year, and the building was still pockmarked with scars from the attack.

On my walk back to my hotel on my last night in Mariupol, I heard what I thought was the sound of shelling not far off in the distance. The next day, locals confirmed it was a missile strike, and I was advised to take a train back up to the capital immediately. My unofficial Ukrainian fixer Vika was also up there, and so I met with her for dinner at a Georgian restaurant on Wednesday the 23rd of February.

We sat down and ordered a couple of glasses of red wine and an entree of borscht soup. She looked paler and less jovial than usual. “It’s about to get real,” she said in a stern, James Bond-like voice. “It’s going down tomorrow. There is strong U.S. intelligence suggesting that the full invasion will begin tomorrow.”

Vika had told me in the past that she had some low-level U.S. intelligence clearance, so I knew she was probably right. We decided to end the evening early and return to our hotel rooms.

“”
I get shivers thinking about how normal life in Mariupol felt before the invasion and how quickly the situation deteriorated.

I Was on the Ground for Putin’s Invasion

Sure enough, the next evening, the sound of air raid sirens followed by multiple missile strikes on Kyiv had begun. It would last for days. The hotel I was in at the time didn’t have a basement to shelter in, and so I spent most of the day in a subway station, filming and thinking about my next move. Everything had shut down, bar one or two cafes, pharmacies and a few minimarts that had long queues out the front. I called Vika and she said I should change hotels and take cover in a hotel basement with other journalists in the north of the city—this is where I took shelter while the Russian military bombarded Kyiv throughout the second night of the invasion with missiles.

After a rough night on the second day of the war in the hotel basement, I was awoken by another international journalist and colleague of Vika’s.

“We need to go now, right now. We need to evacuate. Quickly pack your things!”

We walked out onto the street, and a driver pulled up to the hotel entrance and scooped us up in his van. Being the tallest, I climbed into the shotgun seat and turned to look at the driver. He passed me a cat in a carrier bag and said, “That’s my cat. Hold it.”

As the car swerved through the city at speed and the cat meowed in my lap, I looked through the front windscreen to see smoke billowing out from a building on the city skyline, evidence of the missile strikes from the night before.

We arrived at the train station, along with hordes of other people all trying to escape. It looked like a scene out of the fall of Saigon. Fortunately, at this point, nobody required a ticket, and we managed to board a train later in the afternoon. The train’s lights were all turned off—I assumed so as not to be seen from above—and we rattled off to Lviv, our destination in the west of the country and closer to the Polish border.

Along the way, we heard an almighty noise that, at first, I thought was a missile but which turned out to be a low flying Ukrainian fighter jet speeding past the train window. After the initial shock, a sense of relief and feeling protected kicked in. I decided to stretch my legs and walk through the train carriages. I stopped at one carriage’s exit and stared out of the window at the sprawling countryside in front of me. I looked down at the stairs inside the train that were below me and noticed a mysterious pool of blood—that I assumed was human. I shot a few seconds of video of it and then returned to my seat, somewhat shaken by what I’d seen.

I Visited Lviv, a Western City in Ukraine

The train arrived at a packed Lviv station early the next morning, and we headed to a hotel.

The architecture and atmosphere in Lviv felt more like Vienna than a post-Soviet town.

It seemed unusually calm and normal and carried a different vibe than both Kyiv and Mariupol. However, every night for my entire one-week stay there, air raid sirens would wake us early in the morning, and we would take cover in the hotel’s basement.

“Stay away from the windows,” a hotel guest said to me after I sat at a table close to a window.

This routine of sleepless nights and early morning air raid sirens became a new normal and something that we all tried to get used to.

Vika called me to say she would arrange a driver to take me to the Polish border and to be ready early in the morning. She also asked me if I could take her passport out for her and FedEx it to her to a location outside of Ukraine. Sure enough, the driver handed me her passport and two envelopes on the car journey out to the border. It took me a while to realize what was going on, and later, I suspected that she was probably on a hit list and afraid of being captured by the Russians. I opened the envelopes, and inside was a significant amount of cash in two different currencies, which I later wired to her bank account after posting her passport back to her from Poland.

After getting stopped along the way a couple of times at military checkpoints by soldiers carrying Kalashnikov rifles, where I showed my press pass and passport, the driver eventually dropped me as close to the border as he could.

I got out of the car and walked with my luggage toward the customs booth. Along the road, there were hundreds of abandoned suitcases that had been stacked up on top of each other in a massive pile. It looked like some type of graveyard—but for luggage. I assumed that people must have been rushing to get out of the country and were no longer able to carry all their belongings.

I noticed a young man in a Ukrainian military uniform crying at the crossing whilst he said goodbye to his young partner and their child, who were also both in tears. All Ukrainian men aged 18 to 60 were now banned from leaving Ukraine. The young woman and child walked ahead of me and crossed over to the Polish side. It was nothing short of a scene out of a World War II movie, only this was real and happening in the year 2022. A young, smiling Polish customs woman walked over to the Ukrainian woman and instantly put her arm around her and comforted her. The true human cost of this war had well and truly sunk in by this stage.

The Polish response to the influx of refugees (one of the largest exoduses since World War II) coming across the border was astonishing. The Poles were well organized and ready to assist their neighboring country with all the resources they had. One got a sense that the Poles, in some ways, are suffering from a kind of survivor’s guilt and are rightly concerned that they, too, may become a target of Putin’s aggression one day.

“”
During my time in both Ukraine and Poland, I saw the best and worst of humanity.

I Stayed on the Ukrainian-Polish Border for Ten Days

The Ukrainian refugees were all given a free SIM card as soon as they crossed over into the refugee camp on the border, and hot food and drinks were also being handed out by volunteers from World Central Kitchen. I decided to work with Dave, a Polish documentary filmmaker and a journalist friend of mine, for the next 10 days on the border filming and doing interviews with aid workers and refugees.

On our first night, we got to witness a Ukrainian woman reunited with her elderly mother after they had become separated in the chaos of the first week of the war.

“It's mother’s birthday today. We got separated during the war, and I am waiting for her to cross through tonight,” she said to me pensively whilst we hovered around one of the fires burning in the camp to keep warm.

For the next few days and nights, Dave and I would witness many more highly emotional moments in that cold border town.

The adage that war brings out the best and worst in people is true, and I know that today. During my time in both Ukraine and Poland, I saw the best and worst of humanity. I went from covering the glamorous catwalks of Ukrainian Fashion Week to becoming a war refugee myself in the space of a few weeks. The resilience and sheer determination of the Ukrainian people’s willingness to defend their country under extraordinarily difficult circumstances is something I can’t nor will I ever forget.

All images were provided by the author to The Doe.