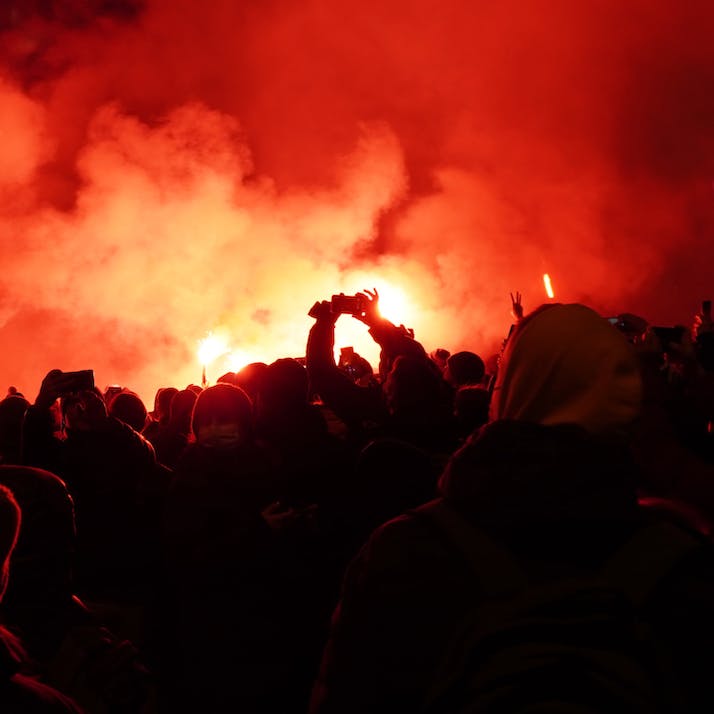 Dark Days in Ukraine: A Cameraman’s War Diary – Part One

A boots-on-the-ground report from a journalist in Kyiv, deep in the warzone.

This is part one of a two-part series. Read the second piece here.

Nothing can prepare you for an active war, especially the constant threat of missile airstrikes. Even the most seasoned war reporters will tell you this much. This was my third time going into an active conflict. The first was in Sri Lanka back in 2001, then 20 years later in Armenia during the border clashes in 2021 and then this year in Ukraine.

“Now you can tell people you’ve been in an air war,” one of my Ukrainian fixers said to me whilst we took cover in a frigid hotel basement in Kyiv on the second night of the war. We began to count the missiles exploding one after another, interspersed with the occasional echoes of small arms fire ringing out in the distance.

One of the more shocking stories my senior Ukrainian fixer told me that night was that in the weeks leading up to the invasion, Russian agents operating out of Ukraine had tricked and paid Ukrainian teenagers into marking an “X” with infrared paint on designated buildings that the Russian military would then later strike.

It was now about 3 a.m., and I decided if I was to make any attempt at sleeping, I’d need to grab a blanket from one of the empty hotel rooms. I asked for permission from one of the hotel staff, who told me to be quick and not turn on any of the lights. After psyching myself up for the mission, I bolted up the stairs to the third floor. The floor was eerily dark and empty with room doors wide open, bedsheets strewn across the floor and in one room, a TV was still on, flickering with the volume turned down. To me, it looked like a scene out of The Shining, but this wasn’t a movie. This was the real world, and whoever had been in these rooms had clearly fled in a hurry during one of the many air raids.

I walked into the room with the TV still on, and it was playing BBC World News. I sat on the bed for just a moment until…BANG! Another loud explosion that didn't seem that far from the window. I could see a red flash, the tail of the missile in the corner of my eye appearing less than two kilometers away, if I were to guess. Tempted to get closer to the window to watch, my survival instincts told me to run instead. As I left the room, heart-pumping, I skidded along the dark hallway, blanket in tow, looking for the tiny light at the end of the hallway with the exit sign to the stairs. A robotic voice in English came over the loudspeaker: “This is an emergency. There is a military attack. Go down to the basement.”

As I headed back down the stairs, other journalists, fixers and some hotel guests were still awake. Some journalists were doing live on-air reports back to their media channels’ studios.

One international worker from WHO was frantically texting his staff whom he was trying to locate, and I could see his hands were shaking. One British journalist arrived through a back entrance to the hotel basement in full body armor, shook his head and opened his backpack. He then pulled out his laptop and a paper bag with a bottle of whiskey. “Would you like a swig?”

“Why not?” I said, knowing it was probably the best one could do to calm the nerves.

After placing his laptop on a small table, we all gathered around to watch Zelenskyy give his first live address since the war had begun.

“He’s not just an actor; he’s a smart guy, and he’s got balls,” said the British journalist.

This was the beginning of my dark days in Ukraine. But let’s go back a bit.

I Traveled to Ukraine Three Weeks Before the Invasion Began

Like many other journalists and observers, I had been monitoring the Russian aggression building up in Ukraine since the end of 2021 and was mentally preparing myself to go. Certain intel reports were suggesting the war would happen straight after the Winter Olympics in China, which, for once, turned out to be true.

I sent out my usual set of pitches to clients and managed to get a few bites from a publication in the U.K. and another in Canada. Within days of arriving in Kyiv, I received an email from ABC TV in Australia asking me to work for them on an exclusive contract that consisted of mainly shooting raw video pieces of events, interviews with Ukrainians and shots of Ukrainians going about their daily lives. I agreed and dropped my other clients or offloaded them to a couple of younger journalists I was traveling with.

The first assignment we covered was an anti-Russian propaganda protest out the front of a pro-Russian TV channel in the center of Kyiv on a snowy night in early February. There were probably a hundred or more protesters chanting slogans out the front of the TV channel’s headquarters. As the main protest organizer finished speaking to the crowd, he put down his mic, and the song “Sure Shot” by Beastie Boys segued out of the sound system and signaled that the protest was winding down and had transformed into a pop-up block party. When the protest calmed down, I approached a handful of locals for interviews to gauge people’s opinions about the current situation.

“We are protesting about this channel that is Russian…we don’t want this channel to broadcast propaganda inside Ukraine,” said Masha, a young Ukrainian protester.

Masha went on to tell me that she hoped that the war would end and that her husband and friends would come home and that Ukraine would have a peaceful future with a good economy and be a part of the European Union. Toward the end of our conversation, her voice began to crack and tears started to roll down her pale cheeks. For the rest of that week, I carried out multiple interviews with other Ukrainians who all voiced similar hopes, especially when it came to talking with the younger generation.

“”
Her voice began to crack and tears started to roll down her pale cheeks.

I Was Given a Backstage Pass to Ukrainian Fashion Week

The next weekend, my colleagues and I were invited to cover Ukrainian Fashion Week (UFW). UFW included all the normal fanfare of an international Fashion Week. It featured supermodels strutting the catwalks, fashion designers cheering them on, big-name artists, an endless flow of Prosecco being served and so on. This would be the last assignment in Kyiv we would cover before Russian troops invaded. The event going ahead was in and of itself an act of defiance against Russian aggression and sent a clear message to the world that Ukraine’s capital would carry on with its normal entertainment program undeterred by the warring ways of its neighbor.

“We need to get ready for the invasion. We need to work hard. We need our economy to be strong. What Putin has wanted for the last eight years is for Ukraine’s economy to collapse, for its society to collapse, and he is trying with all his power to make this country disappear from the world map,” said Vivy, who is the founder of a Ukrainian fashion start-up, among other things.

It is widely believed that Putin has always wanted to bring Ukraine back into the sphere of his influence, and he has proved that he isn't afraid to obtain it militarily.

Now, in retrospect, and to some extent at the time, it felt somewhat surreal walking around the backstage area of UFW with models swanning about giggling and having fun posing for photos and taking selfies, given what was in store for the country soon after.

“”
They then ran down the stairs to the bunker bar and grabbed my backpack and ran away into the night. The whole thing happened in less than 30 seconds.

On the final night of Ukrainian Fashion Week, I was invited to a bunker bar to film in the center of Kyiv. These bunker bars are quite common in this part of the world and were real World War II bunkers that have since been converted into bars or strip clubs.

I wandered downstairs and sat next to a British pilot, who flies private jets for VIPs, and struck up a conversation. I left my bag downstairs next to him with my camera gear inside to take a break up on the street level. He then left shortly after, and as he waved goodbye, a group of three or four men appeared, walking toward me. One opened his arms, gesturing to hug me, while another man went around behind me and snatched my wallet from my back pocket. They then ran down the stairs to the bunker bar and grabbed my backpack and ran away into the night. The whole thing happened in less than 30 seconds.

I’ve been in hostile environments before, and I’ve been injured in the field, but I’ve always been lucky to not have anything stolen. I was told by a variety of people that there was no point in reporting it, as naturally, the local authorities would have too many bigger problems on their hands. The mugging was to remain a mystery. Some people told me it was probably a Russian gang. Others said it might have been the Security Service of Ukraine in a case of mistaken identity for being a Russian spy.

Whoever they were, they had been watching me for a while to know that I had a backpack downstairs. Moreover, it was most likely that the material on my camera was what they were most interested in and the wallet theft was only to make it look like a simple robbery.

Apart from muggings, another pain point for journalists in Ukraine is the constant threat of cyberattacks. In the days leading up to the assault on Ukraine, I noticed periodically I couldn’t get a keystroke in Microsoft Word and my photo and video editing apps didn’t always function as they should. Google Maps became less accurate during the invasion, although this was likely to have been instigated by the Ukrainian authorities so as to mislead the Russian military advancing from inside the country. Other journalists I spoke to shared similar struggles, particularly with map accuracy on their devices. It isn’t just journalists who are targeted by cyberattacks; the Ukrainian government has also had to contend with this issue for some time now.

It goes without saying that many journalists in Ukraine are having an extremely difficult time. As of May 2022, at least 23 journalists have been killed in the field since the Russian invasion began. Aside from the risk of dying or being seriously injured in the field, cyberattacks, harassment and robbery are actually common occurrences and go with the territory. One of my colleagues later informed me that he and one other journalist had guns pointed at them by the police and a camera was ripped off them in a similar case of mistaken identity for being Russian agents.

What was to happen over the following weeks was a kaleidoscopic matrix of psychological warfare and impending hell.

All images were provided by the author to The Doe.