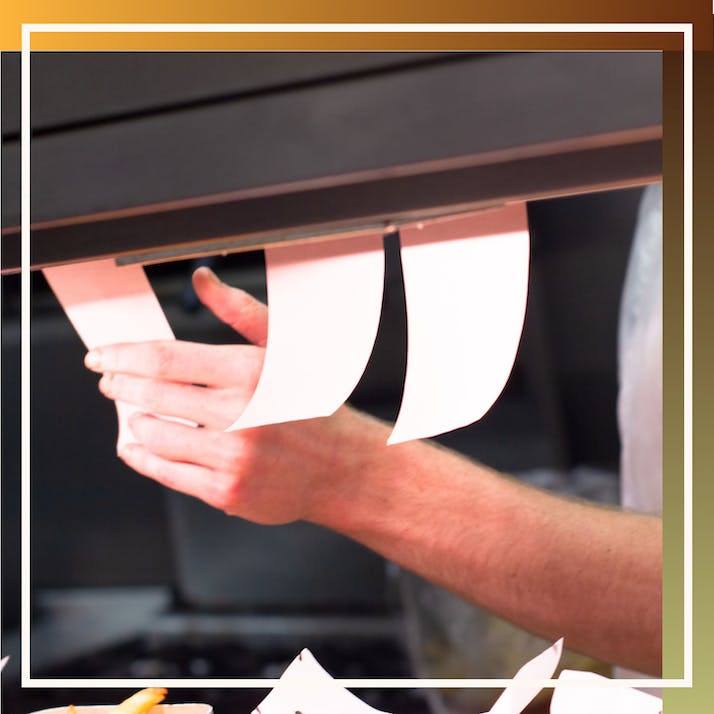 My Restaurant Job Is a Corporate Kitchen Nightmare

Food service work during the pandemic is a ticket to burnout.

Americans love instant gratification. After a long day, almost no one going home to their family also wants to run to the nearest market, prepare a meal, set the table and clean up afterwards. It’s much more enticing to visit the nearest drive-thru window or have a quick night out with the family at a restaurant before starting it all over tomorrow.

While the restaurant industry does extremely well at upholding its tradition of service and keeping a steady flow of revenue to keep that service alive, it’s not without its dark secrets and habitual sacrifices. I started in the industry out of passion for food. Like many others in the same situation, I’ve come to resent the job I chose, and I’m too tired from the constant berating to stand and fight for any improvement.

For chain restaurants like the one I work in, the worst problems begin at the restaurant’s HQ, where cutting corners and customer/worker communications are their main concerns. Anyone under them is at the unwavering mercy (or lack thereof) of what they can throw at their expendable, and oftentimes underpaid, employees. In their minds, stores can and will be run like Michelin-starred restaurants, regardless of their real-world status, with restrictive and time-consuming procedures upheld to ensure that every meal comes out memorably.

In reality—where time is always against anyone who works in a kitchen that’s halfway functional on a lucky day—it’s not easy to consider every little detail that corporate would like us to. We have to find our own ways to cut corners and keep time restraints in mind just to make sure we can get food out of the kitchen. That sometimes leads to unsafe decisions for both workers and customers. We all know that customer safety is what’s most important, and we do our best to abide by that, but you might be surprised if you knew what happens in a kitchen to keep them from truly becoming sick.

“”
There were problems in the restaurant industry before COVID. Now there are a plethora of new issues affecting a vast majority of restaurants.

There were problems in the restaurant industry before COVID. Now there are a plethora of new issues affecting a vast majority of restaurants, and it seems like those problems will continue until workers begin to show a little retaliation.

I began working at a newly-opened location of a breakfast cafe chain a little over a year ago. In the beginning, we barely had any online or to-go ordering. We all assumed our kitchen would work like most kitchens. Training went off without a hitch, and everyone was well on their way to becoming comfortable at their stations, with three people crammed in prep, working diligently, six on the line and a pair of dishwashers. While it was a little annoying at times to take a step and be on someone’s foot, customer demand practically required the full team to be on the line to keep pumping food out at a rate to match the orders coming in.

As time went on, those who couldn’t handle the heat (literally and figuratively) of the kitchen left or took transfers back to the stores that had previously trained them. Those who remained got used to working in a kitchen that was permanently short-staffed, with the rare inclusion of a “warm body” hire or help from another store. It became routine for me and one other person to wake up before sunrise and head to the kitchen for an hour of prep work before opening. At least I was rewarded a key—not because I was working hard and deserved it but because I got tired of having to wait 30 minutes outside for management to show up and then proceed to rush line setup while cooking.

Currently, we take to-go orders through Uber Eats, Olo, our website and in-person, while also dealing with in-house orders from groups as big as 30 at a time from 6 in the morning until hours past when we’re supposed to close. The restaurant itself has no means of slowing down production or denying large groups or ridiculous orders—that’s up to the graces of those above us, who only see the $5,000 days and not the way they’re wearing us down. The bad reviews, tremendous wait times and order mess-ups have caused things to ease up, but we’re still obligated to send out food we don’t have and to improvise even under the worst of conditions.

As corporate continues to expand an already considerable number of stores, it begins to stretch what little we have. We’re constantly training new management and new employees, who either quit on us after a few weeks or are forcefully transferred to satiate another store’s needs. Current employees have gotten tired of having to train all the time, so now they just leave new hires to fend for themselves and to get berated for not knowing a job they were never trained for. It doesn’t help to have a highly explosive manager who imposes half of their workload on the employees, screams and belittles anyone who tries to do their job and doesn’t care to oversee the more vicious customers, leaving servers to handle customers’ belligerent wrath themselves.

In the Food Service Industry, Hell Is Other People

I’ll never understand the headspace of people who get aggressive with someone who's only trying to do their job—sometimes aggressive enough to the point that police are involved, always over something minor. You aren’t really going to go into the kitchen and make it yourself—especially since what you’re asking for is far beyond our kitchen’s capabilities. You’re not going to be applauded for making your server cry, especially when they barely make a living wage and still come to work with undeniable strength. That type of behavior shows a low level of intelligence when you aren’t willing to be at least a little civil over something that can easily be fixed if you’re patient.

Don’t do unto others what you don’t want others to do unto you. Get off your high horse, leave the God complex at the door and accept that cooks or servers are going to make mistakes—because shockingly enough, we, too, are human. Remember, there’s no restaurant if everyone quits because they no longer want to deal with the abuse, so have a little humility and understand that being able to sit in any restaurant is a privilege that can easily be taken away by the will of the workers.

My biggest issue is with customers who want great food without the wait. Understand that restaurants and fast-food places are two vastly different entities with two increasingly different ways of how the kitchen is run. I don’t go to a drive-thru and expect to get a mid-rare burger on a slightly toasted brioche bun with maple-glazed bacon in under 40 seconds for the same reason that no one on planet earth should expect that the food at a sit-down restaurant will come out as fast as at a drive-thru.

Understand that even in the kitchen, we are vividly aware of what happens in the front as well. We remember names and faces, the ones who come in trying to scam a free meal, and although we can’t kick them out unless they become a documented habitual repeater, we’re not nice to the food that goes out to them.

“”
Get off your high horse, leave the God complex at the door and accept that cooks or servers are going to make mistakes—because shockingly enough, we, too, are human.

Feeding You Has Made Me Fed Up

People who have never worked in a restaurant setting such as this will never come to fully understand the level of frustration and exhaustion that we work through on a daily basis. We not only work six out of seven days, for 10 to 12 hours straight in the blazing heat, but extensively deal with issues beyond our job description. It’s not hard to fall into becoming the reliable one if you’ve got a good work ethic, to have odd jobs gradually tacked onto your workload that over time become your responsibility.

I don’t do this job out of passion anymore. The work is grueling and way too much stress for anyone to deal with for 10 straight hours daily. I don’t even really do it for the paycheck because I have other means of revenue from more confidential projects. I used to wake up every morning to face a job with a good living wage that I’ve started to hate because of the immoral work standards and the aggressively rude clientele who we’re supposed to serve with an unmatched kindness. To this day, I don’t use microwaves because my first restaurant job had one going at practically all hours of the day, but my current job has made me start hating myself for having to deal with severe anxiety and heart palpitations at such a young age due to everything I’ve dealt with over the course of a year.

I guess in some way, I could thank my horrible work situation for making me realize that this is a world I no longer wanted to make for myself, for getting me to venture out into uncharted territories and find new means of making a livable wage without the stress. Rest assured, when the company finds a decent workforce that won’t quit or be expedited elsewhere, I’ll be quitting the same day.