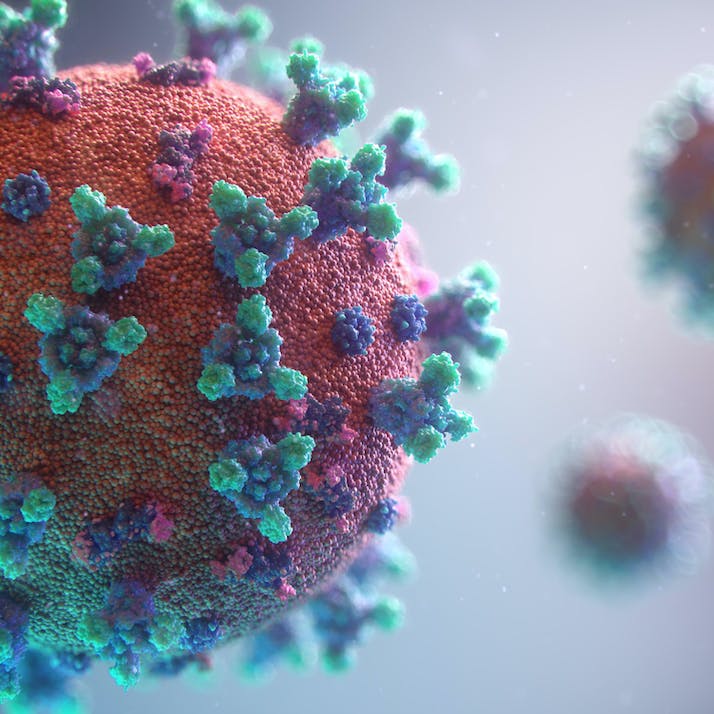 I Have Coronavirus Inside of California’s San Quentin Prison

A current inmate writes about the conditions inside of one of the nation's most notorious prisons.

Doing time is hard enough as it is.

But out of the 13 years I’ve been incarcerated, the last three-and-a-half months have been the hardest—by far. I have never experienced this much stress and anxiety. And it all started once COVID landed here from Chino.

Up until then, I felt San Quentin was doing a decent job at keeping the virus out. All staff was reduced to C.O.'s, medical and kitchen staff only. No work, no groups, no sports and worst of all: no visits. That hurt me the most, but as much as I miss my loved ones, I felt safer having all these activities on hold. To continue to run the normal program would have been a recipe for disaster. So here we were with a modified schedule of yard every other day, showers every other day and phone calls once every five days. I definitely wasn't a fan of the limited calls, and I would much prefer to shower every day, but, hey, we were COVID-free so I took the good with the bad.

Then some genius decided it was a smart move to transfer 121 incarcerated people here from Chino. It has been hell ever since.

For the life of me, I can't understand why they thought this was a good idea. Don't get me wrong, my incarcerated brothers at Chino were dying and the outbreak was out of control. So, something needed to be done and fast. But the answer was not to send them to a prison with zero confirmed cases. Would you move infected members of one nursing home to another with no cases? Would you send infected soldiers from one military base to another with no cases? Of course not! So why do it to us?

Simply put: Our lives don't matter. We are considered second-class citizens (if citizens at all) and because we have committed crimes, we are not worthy of the effort of protection.

How the San Quentin COVID-19 Outbreak Is Being Handled

Our lives aren’t worth saving. This is clear by the way they have dealt with me and my celly. We were both tested June 23. A few days later, the nurse came by to check my temp and oxygen level, but didn’t check my celly. That didn't make sense to me, so when it happened again the next day I asked, "Why am I being checked but not my celly?”

And the C.O. tells me, “Because you’re positive.”

So, I ask, "And you're going to leave us in here together?"

I couldn't believe it. The C.O. told me that this was her first day back and that she didn't know how they were handling people who were testing positive.

On June 30, we officially received our results in the mail. I immediately showed this to custody and the nurse, requesting a cell move. The response I got this time was, “Well, he (my celly) probably has it by now, so we're not going to move you."

But he didn't have it. He tested again on July 6, received his results on July 11 and was still negative. They’re sure to move me now, right? Wrong. This time reason being they aren't doing any moves right now. They had already taken dozens of people to the hole who tested positive and there were at least 50 empty cells. Space wasn't an issue.

Image inside of San Quentin provided by the author's family

Since then, my celly has tested negative two more times and I continuously requested to be moved. I was told by the lieutenant to, "Get your shower and get the fuck out of my office."

Every day I am worried that I'm going to infect him.

And, what scares me the most is that he may not recover as easily as I did. He is classified as "high-risk medical," is over 50, has high blood pressure and has already had valley fever. The stress of this has caused me to lose sleep and lose my appetite. I have conveyed this to medical staff as well as custody and the only answer I'm given is that I shouldn't be worried because I've recovered—so I'm alright now.

"I'm alright now?" What happens in a few months when: The flu season hits and my antibodies go away? I'll be in the same position. God willing, I won't catch it again but I'm afraid a second wave is inevitable. Unless the population is drastically reduced, we will begin to get re-infected if our antibodies are depleted.

“”
A mass release must be done and fast.

The Only Solution Is a Mass Prison Release

The California Department of Corrections and Rehabilitation and Governor Gavin Newsom are dragging their feet in taking decisive action. And the longer they take, the more lives we will lose. And it's not just the incarcerated population here at Quentin. This outbreak will continue to impact the staff here as well as the surrounding communities.

Almost 300 staff have tested positive and Sergeant Polanco has died.

A mass release must be done and fast.

And I'm referring to more than just the "non-violent, low-level offenders." This narrative is not only misleading, but it also fuels the fear of the public when it comes to releasing us. There is an irrational fear that if you free people who have committed violent crimes, they will go out and immediately rob, rape and murder. However, the numbers simply do not support this. The recidivism rate for lifers is low. And the majority of lifers, like myself, are incarcerated for violent crimes. We are growing, changing, maturing and learning from our mistakes. We are reentering society no longer taking from or harming but contributing and being productive.

My crime will always be violent. That is something I cannot change. But what can and has changed is me. It is time to shift the focus from the crimes committed to the rehabilitation efforts taken post-conviction. This should be done in general, but now more than ever because of a pandemic that cannot be controlled in this environment.

“”
Our living conditions are inhumane.

COVID-19 in Prison Is Simply Not Sustainable

Our living conditions are inhumane.

The building is filthy and the deep cleaning they say has taken place is a joke. The cleaning crew wiped the rails and mopped the floor. Porters do that every day. They finally cleaned the trash from the gun rail but the vents are still clogged with layers of dust, and turned off: They have not been cleaned in years. They are refusing to open the windows, so there is no fresh air coming into the building. Fans are blowing recycled air around, which is doing nothing but helping the virus spread.

And they have not touched the cells; it is a complete lie when they say they have. Hand sanitizer hasn't been passed out since April. (Not to mention the gallons of hand sanitizer Bay Area rapper E-40 donated. We have yet to receive one drop of that.) And if that isn't enough, they are forcing two people to live in a smaller cell than what's legally required to house a dog. So, an animal is entitled to better living conditions than what we are afforded.

How long must this continue? How many more must die before something is done? When will the powers that be recognize our humanity and start making decisions based on what's right and not what's best for their image? Round two is coming, and mass release is the only answer.

Image inside of San Quentin provided by the author's family