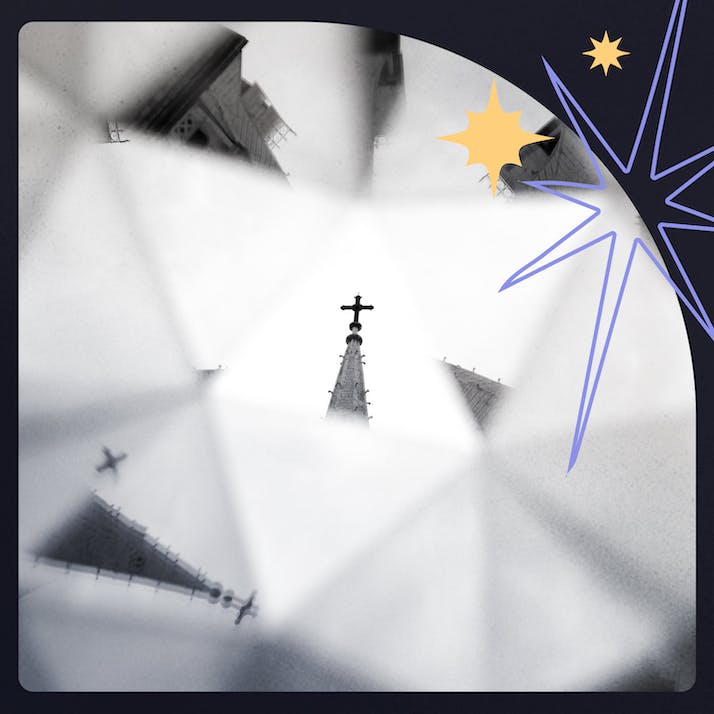 How Conspiracy Theories Led Me to Christianity

From the New World Order to studying the Bible, my journey to Christ was a unique one

Researching the New World Order and globalism took me down many rabbit holes, one of which eventually led me to the most important realization of all: The Bible is true. It hit me like a ton of bricks to the face. And it changed my life forever—literally!

That probably sounds weird to you, especially if you're not a Christian, but it's a true story. Yes, I know, I know: Everybody's testimony about how they came to know Christ is special and unique. You've most likely heard plenty of them before. But mine is really, really unique.

Under Odd Circumstances, I Read Books That Fueled Many Questions

It all started in college. After getting arrested for marijuana possession with some dumbass friends, a county court ordered me to do community service at a nonprofit if I wanted to stay out of jail. To be a smart-ass, I decided to do my “service” at a communist people's library in the college town where I lived.

It's not that I was a communist, per se, but it just seemed like a funny thing to do, and reading sounded better than smashing big rocks into little rocks. Plus, even though I wasn't a communist, I was militantly anti-God, pro-abortion, anti-war and all those other things that make naive young liberals susceptible to communist manipulation—useful idiots, as they say. In fact, most of my “service” consisted of reading obscure books surrounded by a bunch of burned-out hippies. And naturally, a lot of the books were ridiculous. Next time, they promised, communism would deliver utopia. It's just that Lenin, Stalin, Mao, Castro, Pol Pot and all the other mass murderers did it wrong.

But there was one book that would set me on a path that would eventually lead to Satan—and then Christ. Hear me out. At this point, I don't even remember the name of it anymore. It was over a decade ago, and I was a big-time pothead and drug user at the time. But I do remember what it was about. According to the book, the Federal Reserve was a private corporation owned by private banks, and the money system was basically a giant scam. “What?!” I thought. “That couldn't possibly be…could it? How could they possibly hide something like that from us for so long?”

In any case, I decided this needed to be investigated further. I even called the Fed in Atlanta to ask if it was privately owned—and it was, by its member banks! As I researched, I learned that the book was generally correct.

The proposed solution—have Congress nationalize the monetary system and print its own currency instead of paying interest to private banks on the currency they create through the Fed—was perhaps flawed. But the general outline of how the Fed worked was essentially true: It was a scam of monumental proportions.

“”
I came to the conclusion that each one had some truth but that these religions were primarily tools of social control.

This newfound insight into the monetary system led me to investigate many other topics. Eventually, I came across the so-called New World Order. Then-President George H. W. Bush famously declared in a State of the Union that Desert Storm was part of a “big idea, a new world order.”

“We have before us the opportunity to forge for ourselves and for future generations a new world order, a world where the rule of law, not the law of the jungle, governs the conduct of nations,” he said, alluding to global law. “When we are successful, and we will be, we have a real chance at this new world order, an order in which a credible United Nations can use its peacekeeping role to fulfill the promise and vision of the U.N.'s founders.”

A lot to unpack in that statement. A credible United Nations that would use its “peacekeeping” forces to impose the vision of the U.N.'s founders? At the time, I did not know much about the U.N.'s founders. But the more I studied, the more troubling this became. Joseph Stalin's regime sent a monster named Vyacheslav Molotov. America sent Alger Hiss, who was later convicted in federal court for lying about his role as a Soviet agent and spy. Those U.N. founders? Is he mad?

On September 11, 1990, a few weeks after the invasion began, Bush made similar remarks before a joint session of Congress. “Out of these troubled times, our fifth objective—a new world order—can emerge,” declared the late president, who, like his son “Dubya” and even John Kerry, was a longtime member of the bizarre Skull and Bones secret society at Yale University.

What was with that phrase? It kept coming up over and over again. Weirdos like former Secretary of State and National Security Advisor Henry Kissinger, who wrote the infamous National Security Study Memorandum 200 calling for imposing drastic population control policies on poor countries, seemed to parrot it all the time.

After Hearing So Many Politicians Say It, I Had to Know—What Is the New World Order?

Of course, it wasn't just members of the Bush crime family or Republicans who were peddling this. Leading Democrats are on the bandwagon too. Joe Biden has repeatedly touted the New World Order in public speeches. And on April 23, 1992, Biden even wrote a piece for the Wall Street Journal headlined “How I Learned to Love the New World Order.” In it, he proposed that America should “breathe life into the U.N. Charter.”

Then-President Bill Clinton used the same exact language as Bush. “After 1989, President Bush said—and it’s a phrase I often use myself—that we needed a New World Order,” Clinton famously declared, echoing countless others around the world and across the United States. It was obvious that there was some kind of agenda here. The question was: What is it?

Growing up in international schools around the world, I had always been taught to view the U.N. as a benign, if incompetent institution seeking “world peace” and closer cooperation among nations. The more I studied the “dictator’s club” and its freakish drive to build a New World Order, though, the more I became convinced that something nefarious was afoot. These warmongers didn't seem all that interested in peace. Rather, they seemed interested in power.

In my final year of college, I came across a mind-blowing documentary that confirmed my darkest suspicions: The Untold Story of U.N. Betrayal. After learning about the atrocities perpetrated by U.N. “peacekeeping” troops to force the people of Katanga to submit to a Soviet-backed dictatorship, it became clear to me that the U.N. was, in fact, evil.

What the Bible Says About the New World Order Resonated With Me, but I Still Wasn’t a Believer—Yet

Years before all this, I had become curious about religion. Having grown up around the world with people of all religions, I decided to investigate what it was they believed. The library had books on just about everything, so I got some on Islam, Buddhism, Hinduism, Christianity, Judaism and perhaps a few others. After reading or at least skimming them all, I came to the conclusion that each one had some truth but that these religions were primarily tools of social control.

But something kept gnawing at me. The more I studied this New World Order, the more I kept thinking about the Bible. I decided to read the book of Revelation, the last book in the Bible. I'll admit it was hard for a non-Christian with very little biblical background to digest. But one thing was very clear: Diabolical forces and world control went hand in hand.

The more I worked on the college newspaper I founded with a few friends, the more I felt that we should at least be Christian-friendly. At one point, I even proposed putting a Bible verse, Leviticus 25:10, about proclaiming liberty throughout the land, in the upper corner of our front page. My two deputies, both proud homosexuals, refused to even consider it. But as time went on, that nagging feeling got stronger and stronger.

My Salvation Hit Me Like a Train—the Bible Is True!

Between the Adderall-fueled late nights, the not-so-infrequent magic mushroom trips and lots of studying about the effort to build a New World Order, my mind kept going back to the Bible. Every once in a while, I would even open a random page of an old Catholic Bible that my Aunt Jackie had given me years earlier. It always seemed to be speaking to exactly the issue that was on my mind. Was there something to this?

One day, it hit me like a freight train: Oh my god, the Bible is true. It really is! Holy moly! I quickly ran outside to call my Aunt Jackie, the faithful Catholic who also happened to be my godmother and who had been praying for me to find God for all those years. I must have been speaking a zillion miles a minute because I remember her telling me to calm down. “The Holy Spirit has just opened your mind to truth,” I remember her telling me. “This is what I've prayed for all these years.” She did urge me not to go overboard, but the excitement in her voice was obvious too. Something big had just happened. And there would be no going back—ever. My aunt still rags on me about being a Protestant, but she's pleased nonetheless.

As the years went on, and I studied the Bible in more depth, it became more and more obvious to me that the Bible contained the answers to literally all the important questions in life. Gradually, I began to shed my old beliefs—evolution, fornication, abortion and feminism, for example—as the reality of God's word penetrated my heart, mind and soul. Fear about the New World Order disappeared completely.

I've never met anybody else with a testimony of salvation quite like mine. And many Christians still refuse to see the biblical answers staring them in the face about what's going on in our world today. But I know one thing: I thank God every day that he saved a wretch like me. And I pray that one day—if he hasn't yet—he will do the same for you.