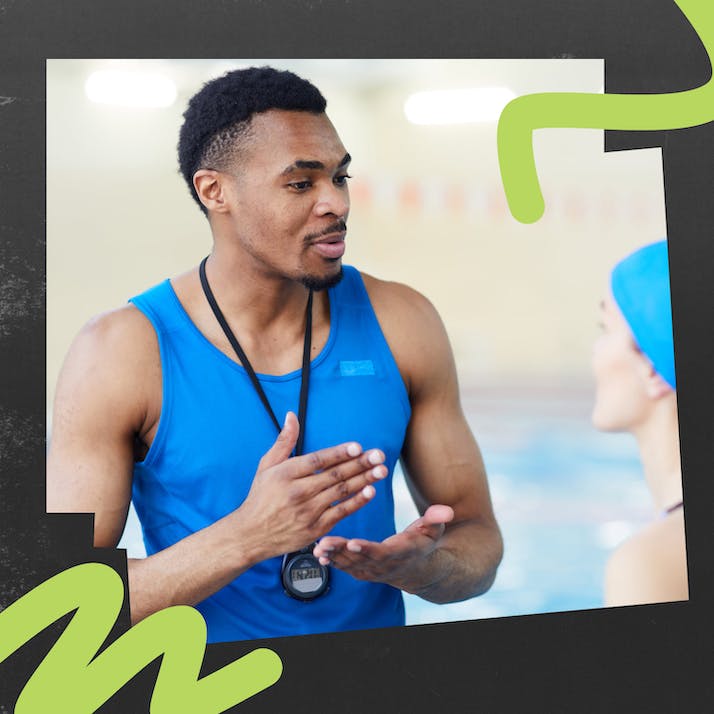 Swim Like a Girl: How Coaching Helped Me Grow

A male high school girls swimming coach explains the benefits of team bonding and why gender doesn’t matter in the pool.

There is a problematic, deep-rooted, negative connotation associated with phrases that refer to the performance of female athletes. They range from “You throw like a girl” to “You run like a girl,” meant not only to belittle the skillsets of the male athletes they’re being hurled at, but to female athletes everywhere.

But when it comes to swimming, these phrases simply don’t exist, something that makes me grateful to be a part of this amazing sport.

I have been extremely involved with swimming my entire life. I competed in this sport for 15 years, and during that time I was a YMCA nationals qualifier, recorded multiple national top 16 time standards, was a three-time captain of my high school team and helped our program to our first-ever conference title my senior year. I was fortunate to reach the NCAA Division I level prior to hanging up my goggles for good. At the time, I thought that my happiest days associated with the sport were over, but I have been extremely fortunate to coach both boy and girl swimmers at the middle school and high school level over the past five winters. During my time on the other side of the pool deck, I have learned a lot about what it means to coach and mentor a different gender, and the unique qualities and characteristics that female athletes bring to training and competition.

“”
What many people are unaware of is that girls can regularly outperform boys.

What many people are unaware of, specifically in swimming, is that girls can regularly outperform boys—both in races and in practices. It’s usually the boys who need to keep up. There have been countless instances, both as an athlete and as a coach, in which I have experienced this firsthand. As a club swimmer with YMCA National Championship qualifying times, I often found myself having to give maximum effort to keep pace with girl swimmers in my practice group. Over a decade later, I still see this occur on a daily basis. My male swimmers will tell me, “If she is struggling to make these intervals, how do you expect me to?!”

Swimming is a beautiful sport that requires an equal amount of strength and technique. It’s not a sport that can just be muscled through. Years of training and muscle memorization allow individuals to gracefully move forward in an environment that is entirely foreign and unique to the human anatomy. Because of this, I would bet just about anything that my female swimmers could easily outrace and outperform any male individuals with no swimming experience, and would go even further to declare that my top girl swimmers could beat at least half the boys who compete in this sport.

The best part of all of this? No one on the pool deck finds this weird. Boy swimmers don’t feel shame or embarrassment when a girl is placed in a “faster” lane than them, nor do they have a sense of defeat when girls keep up more efficiently during a harder set than they can. Additionally, since boys and girls usually compete at the same time during high school “dual meets,” the boys are often in awe at how fast some of the female competitors can go. And trust me, these girls do not just “go fast for a girl”—they go extremely fast in general.

The reasons for these equal or even superior performances can be explained for a variety of reasons. Typically, girls have smaller muscles than boys, and over the course of a long and grueling practice, become less tired than their male teammates, allowing them to continue to train at a high threshold. Additionally, when it comes to racing, brute force and strength can only get you so far in the water. Sure, the former football player who joined the swim team out of the blue might be able to mash his way to a faster 50 yard freestyle time. However, can he do it for 200 yards? 500 yards? Can he master the butterfly and breaststroke events? Having stamina and exceptional technique are vitally important in swimming, and this takes years of training to accomplish. The female swimmer, who possesses both of these skills, will always be able to perform against any other individual, regardless of gender.

My Girls Team Bonded and Competed as a Tight-Knit Group

It should be noted that female athletes, and swimmers, in particular, are incredibly special in other ways—not just in their ability to compete at such a high level. They're extremely caring toward their teammates and create sisterly bonds. They’re uniquely passionate about their teams and performances at championship meets, and often cheer at such high decibels on the pool deck that you can’t hear the person standing next to you. They decorate and plan festivities for senior night and banquets and ensure that the oldest members of the team get a special send-off for their final season. And they care about you as a person and are genuinely interested in your life away from the pool deck, creating friendships that can last a lifetime.

Of course, coaching boys has its fantastic benefits and unique experiences as well, and I have had the pleasure of mentoring and guiding some magnificent and extremely talented and fast young men. But there is an entirely different world and atmosphere to coaching female athletes, which many male coaches don’t have the opportunity to experience.

For instance, I will never forget last February, when my girls squad advanced to the state quarterfinals for the second year in a row. We were taking on a team that was heavily favored against us and featured two of the best girls in the entire state. As we traveled two hours to face our opponent, the girls were extremely upbeat and joyful on the bus ride down. They were laughing, talking, joking and continued their karaoke tradition of belting out the lyrics to “Shallow” by Lady Gaga and Bradley Cooper. Here I am, feeling nauseous from nerves about the upcoming meet, and the girls were just happy to be bonding and enjoying what could be one last fun ride together. However, when they stepped off that bus and onto the pool deck, it was all business, and they pulled off the shocking upset. It was truly one of the best moments in my swim career, and the girls did it in their own special way.

“”
These girls are tough.

Coaching girl swimmers for the past five years has undoubtedly made me a better coach and individual. I’ve had to find new ways to inspire performances and calm nerves rather than just giving the traditional “yell and pump them up approach.” These girls are tough, they can handle pressure and they want to succeed, but there’s a delicate balance of finding the right way to do it. I have appreciated this learning experience, and I know it will carry me forward in many aspects of my life, and not just on the pool deck.

I was so lucky to lead a girls program that truly went from one of the—if not the—worst teams in the state to a semifinalist program through our hard work, dedication and team bonding. I even earned Coach of the Year honors in the process. We all grew together and learned together, and I’ve truly found that, in the pool, girls can really be seen as the equals they deserve to be, further cementing swimming as one of the best sports in the world.

So go ahead: “Swim like a girl.” There is no higher compliment in the sport.