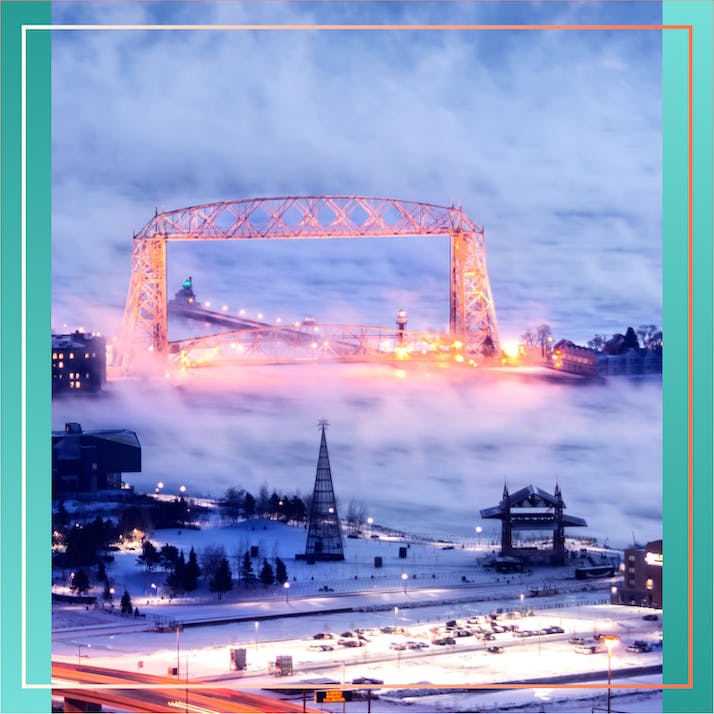 A former Duluth resident argues that the town may actually not be a refuge.

In below-zero temperatures, the lake holds onto its heat more than the shoreline surrounding it, causing a thick morning fog to float over the surface, the gravitational pull of a diaphanous moon to the water. Lake Superior is so large that it has tides like an ocean. It is December 2019, and I am sitting near the Aerial Lift Bridge in Duluth, Minnesota, almost 1,200 miles away from my apartment in Brooklyn, watching ice chunks float in the harbor. For a short period of time during my childhood, my father was the city engineer and in charge of this bridge, most known for letting iron ore ships in and out of the city.

Earlier in the year, Duluth—situated in the most southern corner of Lake Superior—was named “the most climate-proof city" in the U.S. by Harvard researcher Jesse Keenan. When I first read about it in The New York Times, I laughed. Our Great Lake may provide an abundant supply of fresh water and a consistently cool year-round temperature compared to the rest of the continental U.S., but my experience growing up in Minnesota was of a state home to an almost cliquey kind of eccentricity I couldn't quite pinpoint to friends on the East Coast—and also a state government still actively reckoning with its positionality in the current climate crisis.

I considered the term "Minnesota nice" an ironic joke, lying physically beneath "friendly Manitoba." Our state is more accurately home to road rage on I-94 and meat raffles held at local Lutheran churches. I recently returned to a photograph I have of two of my family's Siberian huskies from a camping trip when I was a kid—one red, one black, their bodies and bright blue eyes pitched halfway between the fire and the tent, the lake just visible behind them. It seemed more like a nostalgic Polaroid from a photo book than a real shoreline currently in the throes of relentless development.

I Can See Why Duluth Is Considered a Climate Refuge City

In many respects, Duluth could, in fact, be considered a ripe candidate to balance on both a metaphorical and literal precipice of change. The city stretches 30 or so miles along the steep shore of one of the largest freshwater lakes in the world by volume, and is the most inland ocean port in the world. Its immigration history is as rich as its rock cliffs: Iron ore production began in the mid-19th century and was the main source of its initial population growth.

In 1870, Duluth was the fastest growing city in the U.S., drawing thousands of families from all over Scandinavia and Eastern Europe. Beginning in the latter half of the 20th century, Duluth, like many American towns that traditionally relied on mining exports for income, shifted to tourism and tech—so much so that finding a public campsite on the lake has now become almost impossible, due to the abundance of privately-owned land.

It costs a hefty sum to see the sunrise these days: The lodge my family frequented growing up is now run by a resort chain that charges at least $130 a night depending on the season. There is a direct correlation between development and levels of runoff and septic waste into the lake, contributing to algal blooms that are increasing due to global warming. According to the University of Minnesota-Duluth, Lake Superior is one of the fastest-warming lakes in the world. My father says the increase in unpredictable weather contributes to the shoreline’s maintenance as well: “Because of the frequency of storm surges and rising lake levels, the shoreline sees continuous erosion issues that must be dealt with—many of those areas in tourist areas and having impacts to the local economy.”

“”
Can a city really be climate-proof if it hasn’t dealt with the environmental impacts already leveled upon its neighboring indigenous communities?

Can a city really be “climate-proof” if it hasn’t dealt with the environmental impacts already leveled upon its neighboring indigenous communities?

I started to ask myself, "What is a climate-proof city, anyway?" Certainly not one that is immune to its past, both its nostalgia and its history of colonization, beginning with immigration but one that continues on in the form of fossil fuel transport through indigenous lands. I thought of notes from Lorine Niedecker's poem “Lake Superior”: "So—here we go. Maybe as rocks and I pass each other I could say how-do-you-do to an agate. What I didn't foresee was that the highway doesn't always run right next to the lake." There is always a highway with gasoline-fueled traffic nearby, and now, the encroaching expansion of Enbridge’s Line 3 pipeline carrying tar sands for over three hundred miles between Alberta, Canada and Superior, Wisconsin, right next door to Duluth.

Proponents of the pipeline and Enbridge executives justify that it “already existed,” and yet, the “repair” expands and reroutes the tar path through indigenous lands with multiple treaty violations. The pipe will carry twice the amount of oil it previously did, slated to be the largest tar sands pipeline in the world. It will now cross more than 200 bodies of water and 800 wetlands that it can potentially leak into. If the local Minnesota government is serious about global warming, it should stop approving modifications of old infrastructures that pose harm to communities, specifically ones that have lived here for generations.

There are eleven reservations in the state of Minnesota (under the names of Ojibwe, Chippewa, Dakota and Sioux), one of which has access to Lake Superior and houses a national monument run by the National Park Service that draws just under 70,000 visitors a year. Karen Diver, the chairman of the Fond du Lac Band of Lake Superior Chippewa from 2007-2015, has further stated in direct response to Keenan’s report: "Our way of life is so tied to a healthy natural environment. More people, more strain, more pollution. From my perspective, we haven't even figured out how to act in a positive way with our indigenous people here." The pipeline seems to be a further example of her point.

“”
There is a world dying and a world being born every second.

Duluth May Not Be Capable of Welcoming Climate Migrants

While I don't have one singular response to Keenan's report, reading it has brought forth vital questions for me to consider in our inevitable future of climate migration: How do regions accept new groups of people, when they have yet to converse with their own sense of memory and loss, and especially when some have not even started to dismantle their violent relations with the local indigenous people? What kind of space does shoreline that was never "mine," but holds a deep well in my body and mind's memory, occupy? What I do know is that I am committed to preserving Duluth and its surrounding landscape as a place of community, beauty and healing, and not one of further exploitation.

“In an age of global warming, there is no background, and thus there is no foreground,” writes philosopher Timothy Morton in Hyperobjects. “It is the end of the world, since worlds depend on backgrounds and foregrounds. World is a fragile aesthetic effect around whose corners we are beginning to see.”

Reading this, I’m reminded that there is a world along the shore that has already disappeared, and there will inevitably be another world that climate migrants move into. These so-called separate “worlds” are just prominent changes in one ever-unfolding experience. There is a world dying and a world being born every second. The constantly icy waters my sister and I dared each other to dip our hands into each summer is a world that is now gone—the warming shallows touching the pipeline is another world yet to come.