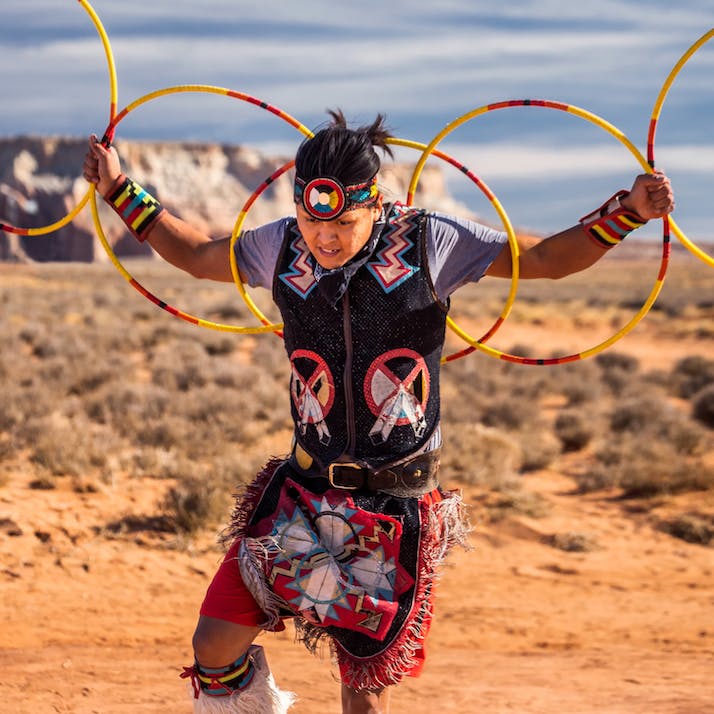 I Carry My Native American Ancestors With Me

A young, indigenous tribe member shares the timeless connection he feels with seven generations of his people.

I come from a history deep-rooted far beyond the United States being a country. I’m one of the original inhabitants of Turtle Island, or what we would call North America. I am my ancestors’ wildest dreams, an answer to a prayer made seven generations ago. “Time immemorial” is meant to describe our relationship with those we have come from, but they’re just as, if not more, present in my life today. The words I’ve used to move people don’t use today’s semantics; rather, they synthesize an ideology that stretches beyond the pitfalls of expression. It’s a feeling that normal words fall short in describing, but this is my attempt at trying, for a moment, to meet you halfway. My halfway starts with time immemorial.

There are many theories as to how my people came to be here, many of which are based on a whitewashed history. If you’re reading this and aren’t surprised, I applaud you. For my mere existence as an indigenous person is often a topic of discussion, tales of being wiped out as some remnant of the past. I assure you I’m very much alive, thriving and sometimes, despite my very best, just surviving. My people are just one of the many tribes that exist here today. Over 500 tribes are federally recognized, many others have state recognition and some tribes don’t have any sort of formal representation. Some of us who are represented don't need representation because we are far older than the current governing body. Theories of ice bridges and great migration have been debunked as far as the timeline goes. We have creation stories of my people emerging from the earth, occupying a timeline with no specific date but events.

“”
I come from a long line of warriors who have seen the real changes of time.

I Often Think About My Ancestors’ Hardships

I remember an elder talking about how life always finds a way. “Roots versus concrete? The concrete never stood a chance,” she simply said. We are and will continue to be here. Now, what does time mean to me? It may not look like the same hourglass that most are used to seeing, as the small grains fall on top of one another, stacking themselves higher until there are no more granules left in the container. What if I told you the hands that tick by on a clock are the same hands that gently shift the hourglass on its top? It's a little unsettling to think of time as being an illusion and a construct. Of course, I see the effects of time passing as I find myself with new white hairs of wisdom. As the year goes on and seasons change. I feel the gradual push and pull of the moons as she changes into her different nightly attire.

I speak with my elders, and in times of need, I often consult with my ancestors. We believe in a timeline that’s not linear but spiraling. I’m talking about a deep sense of time, one that spans back far beyond any sort of my actual recollection. I grew up in a time pre-internet, which may sound unfathomable, but where I grew up we didn’t have running water or electricity, and for many, that’s still a daily reality. I’m talking of my ancestors. I think back to a rich history of elders before me that I can count back seven generations long before contact with early settlers. I think of all the beautiful life that was present here and all the hardships and sacrifices my ancestors had to endure for me to even be here now. When I say I'm my ancestors’ wildest dreams, I may very well be. I’m deep-rooted in my culture and will be in the next generation of ceremony keepers, with a language as old as this land. I speak with my ancestors as they are now part of that landscape, laid to rest in human form.

I often sit and ponder about my grandpa who was known throughout our region by many. He lived through arguably one of the most challenging times to be Indigenous. Over his 107 years, he saw a pandemic not of this current time but of days past. A couple of World Wars and the expansion of the great Wild West that encroached so heavily on his homelands. He was a simple man, who went by horse and buggy to sell his fur pelts and raise his sheep, all while actively having a bounty on his head for being indigenous. Within his lifetime, he saw his way of life and religion outlawed.

“”
We believe in a timeline that’s not linear but spiraling.

I Want to Keep My Indigenous Culture Alive

Now, why is all this relevant? Because I come from a long line of warriors who have seen the real changes of time. With an unwavering determination to survive, they were the definition of resilience. When I came into the picture, I stuck with them closely and, despite not speaking any English, a language I was forced to learn as my second, I was able to communicate mostly beyond words. My grandparents were traditional and yet so far beyond modern. The simple way of life that their parents taught them was not something fading away into the past but actually accelerating us into the future. They taught me what it is to have compassion and spirit. That all living and nonliving things possess an energy force that’s not always detectable to the human eye.

When we speak of Mother Earth, we mean our actual mother who birthed us into existence. My mom was taken away as a child, along with her siblings, and violently indoctrinated at a religious, government-funded assimilation school. Her language and heritage was actively targeted as being “less than.” She was told not to speak her language and faced repercussions for doing so. “They told us we couldn’t speak our language out-loud,” my mom would tell me, which at the time was scary. But her older sister turned to her and told her, “They don't want us to speak our language out loud and we won’t. We will whisper it.” She and her siblings did just that. At night, alone in their bunks, they whispered their mother’s tongue and kept the language alive, risking severe beatings and much worse punishments.

My mom always told me to speak the truth even if your voice shakes, and sometimes, just like them, I just want to be heard and seen. I want to let you all know that I’m still here, I exist and that I matter. This is my ultimate truth-telling.