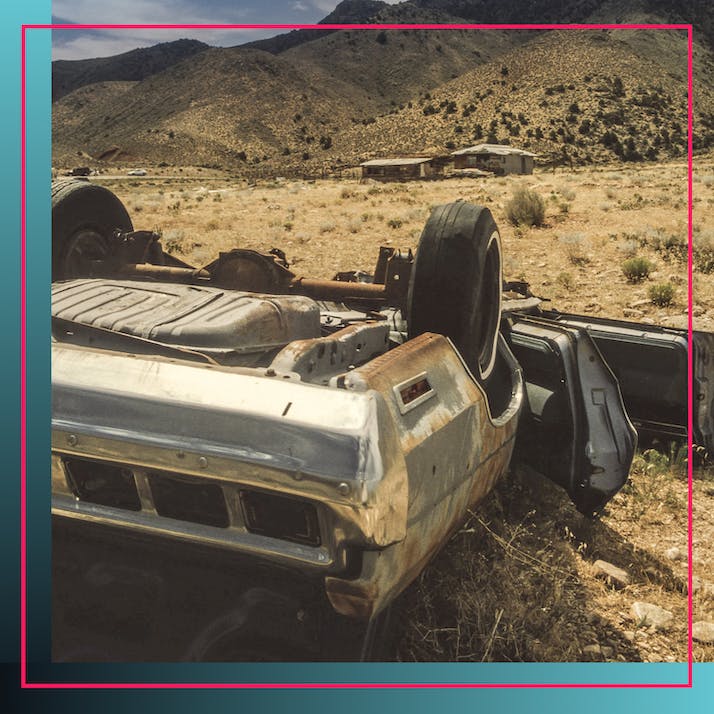 The Car Accident That Changed My Life, and Killed My Best Friend

I shouldn’t have survived, but years later, after five years of prison, I finally found closure.

Giggsy, Teller and I had been enjoying a spring evening driving around the darkened countryside. It was a crisp and clear night, and we shared stories and laughs and tales of female conquests, as lads do.  But our mission was incomplete. Our plan had been to find a quiet, rural pharmacy and liberate its dangerous drugs cabinet and register.

We’d been knocking around together for a month or two. We had a penchant for narcotics that no end of pharmacies could satisfy. We were in the fortunate position of not being in a hot car for once, though to describe it as strictly legal would be stretching it. None of us held a license, but these were the pre-digital record days. We had even been pulled over by the local police at around 11 p.m. They said we seemed to be in a hurry away from somewhere. It proved to be something of a fool’s errand when their bemused faces receded into the dark of the rearview mirror. They were for sure looking for other vagabonds; otherwise, their search and interest would have carried a little more voltage.

They knew us all by name and face and we gave them a half-hearted routine on police harassment.  They did go as far as to say, just as they turned away, “You do have a license, don’t you Johnnie?” I smiled and never skipped a step as we remounted our wreck of a Ford Escort steed. The car was barely drivable, let alone safe. After this near miss of sorts, we decided to cut our losses and invest time in smoking the little hash we had, drinking a few beers and sleeping in the car in a hidden lay-by, just off a back road in the local mountains.

“”
You’d have liked us but would never have chosen us as matches for your daughters.

We Stole Cars and Robbed Pharmacies

Giggsy was as close as you can be without being blood, perhaps closer (as life has taught me in the many intervening years). He was like a little brother, and I, in turn, was close to the rest of his family. Teller was a pal. I’d gotten to know him when I got wind of his plot to steal my real brother’s motorcycle. Punches were exchanged, but, as is the way, we found each other tolerable, fun and useful to be around. We were young but carried monkeys on our backs the size of small houses. The three of us had ended up working together on some pointless government scheme, earning £29 a week. The high life was not available at that pay rate. No life was available. But we weren’t interested in money, just punk and politics and drugs. Yeah, drugs!

Usually, we worked away from our locale. We’d steal a hire car from the Manchester Airport, then rob a pharmacy or two, then “plot-up” in a hotel on the funds taken from the registers for as many days as the drugs and cash lasted. Depleted, the dawn of sickness came, and need forced us ever onwards.

Fortunately, on the night I speak of, the pressure was mediated by the fact that, in my pocket, I had a generous Rx prescription for methadone ampoules and Valium, plenty to keep us going for a few more useless miles. The more useless, the better, I thought. We spat in the eye of conformity and were unapologetic users. Trust me, you’d have liked us but would never have chosen us as matches for your daughters.

My Car’s Suspension Collapsed and We Tumbled

If you’ve ever got drunk and stoned in a car you intended to sleep in on a chilly April night, you have some idea of how we felt in the morning—other than, perhaps, the egg timer of opiates running down, the early morning melancholy described by Burroughs and the visceral need of the Velvet Underground’s “Heroin,” a song conceived the year I was born. We were getting sick and, as I now recall, my sister’s then-boyfriend happened to pass. He was a local jock, to coin an American term—a big, tough, drunk motherfucker and the father of my nephews and nieces. He looked at us sideways and quipped as he leaned in through the window, “You fuckers smell.” He told us to stay out of trouble.

My assigned pharmacy was a 25-mile drive. For the sake of discretion, I kept my medical shit as private as possible for the sake of my mom and family. Another fool’s errand. If only I’d picked the one three miles away.

We were driving a difficult country road, strewn intermittently with city dwellers that had no idea of how to drive winding, faster roads I was driving fast but not beyond the 60 mph speed limit on that road. All I recall is coming to a right-hand bend, not too steep but able to slip away from you. Just as I hit the apex, the rear right suspension collapsed and we slid, hit a concrete bollard and then the car tumbled over and over. The noise was infernal and the whole incident seemed to last an eternity. I had my seat belt on. I felt Teller hit me at some point in the roll. Giggsy was in the back.

As the car came to a rest, I was in a daze. People came running from stationary cars. Someone grabbed me and sat me in their car. I was trying to shake them off but went into some kind of shock. I turned back and somehow Giggsy had ended up in the boot of the car. Teller was unconscious in his seat. I fucking wailed. I knew this was as bad as bad can be. Pale, worried faces pressed against my peripheral vision and scared the shit out of a few tourists.

The Paramedic Told Me My Best Friend Had Died

I won’t labor the details here. I could see passersby swarming around Giggsy and Teller. I was ensconced in the front seat of a Samaritan's Jeep, getting so sick I almost stole his car to get to the pharmacy. I can never forgive myself for that thought, but it showed me the depth of my dependence. My prefrontal cortex was completely hijacked. I was fucked.

Two ambulances arrived within around 30 minutes. I’ll never know if their timing would have made a difference. A kind old paramedic strapped me in my seat. I was unharmed but in shock and going into withdrawals. I begged him for information. He looked me square in the eye with nothing but compassion and said, “The lad in the back didn’t make it. The other in the front is touch and go.” Giggsy was dead. Teller was in a coma for nine long days but survived. I felt my soul darken, and yet another part of me broke.

Needless to say, no one seemed to give too much of a fuck aside from friends and family. I’d just killed one of my best friends, and as the process worked itself through, I had my day in court and was fined £400 for careless driving and driving an unroadworthy vehicle. I went mad—literally mad. The guilt was endless. I would rage at the moon screaming, “Why not me, you fucker, why…not…ME?!” I drank and used and fucked and on and on and on until the pain disappeared as I ended every night unconscious. About a year later, I was convicted of robbery at a pharmacy. I got five years. I fucking laughed and deserved every minute of that time.

I Received a Message From Beyond the Grave

Four years later, I was sitting in my office in London, opposite my then-partner. She helped me get a job and interesting stuff to do straight out of the jail gate. I never told her about the crash. She told me she was psychic and consulted a spirit guide, and one day, she jumped up and shouted. “We have to go—now!” She took me to the “spooks” place as I would call it, gently mocking. I remember sitting in the cafe, waiting for her, reading the NME about the formation of Black Grape.

She came down an hour later. “I was told I was sent here for someone else, someone not ready to be here for himself because he still has a black aura,” she said. That frightened me but rang true. Then she asked me, “Did you know a guy by the name of Giggsy?” I nodded, went cold and felt a wave of nausea. She said the message was from Giggsy. He said, “There is only love on this side.” She caught me as I fell.

I have no more words.