I'm a Soldier: The Canadian Military Is a Rotten Organization 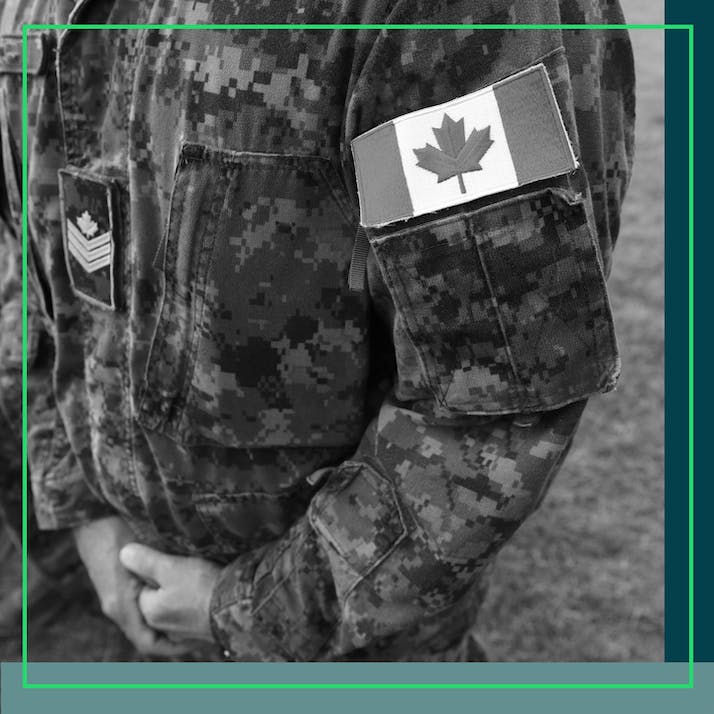 I'm a Soldier: The Canadian Military Is a Rotten Organization

The country’s armed forces portrays itself as progressive. It is anything but.

As with many Canadian immigrants, I realized that education was expensive in Canada and definitely needed to get an above minimum wage-paying job. With that end in mind, I joined the Canadian army to get it for free. Even prior to coming to Canada, I had heard that the Canadian Armed Forces (CAF) were primarily a peacekeeper force, inclusive and diverse, following Canadian values. Little did I know those values and images promoted by the CAF were propaganda for abroad to cover what their military, and ultimately Canada, is really about. During my time in the CAF, sexual harassment, racism and corruption were everyday occurrences.

“”
During my time in the CAF, sexual harassment, racism and corruption were everyday occurrences.

Despite the Army Having a Zero-Tolerance Policy, Drug Use Is Common

I will have to admit: The red flags were everywhere in boot camp. In boot camp, you are just confused all the time. Because you are new, the instructors will yell at you for everything, no matter if you did it wrong or right. This is done to cause stress and see how you perform. So in the beginning, you never know what is right or wrong. It was when I arrived at my trade qualification training in Borden, Ontario, that I understood the type of military I was in. Apart from understanding how an underground prostitution ring worked (run by female recruits earning an extra buck or two), living in barracks (“shacks,” as called here) opened my eyes to drugs like cocaine, LSD and ecstasy. As a Catholic, I felt uncomfortable participating in those activities but could not ignore them. I mean, some of my roommates had to get rid of their Tuesday morning hangover prior to work, so a line of cocaine usually did the trick. Everyone knows about it, and it is tolerated.

And as an army cook who has been deployed on ship and major field exercises, I can say with confidence that it does not end in barracks; soldiers and sailors constantly use cocaine to keep awake during long watches on ship and major field exercises. The military has a zero-tolerance policy for drugs, but since so many people do hard drugs in the military, including officers, the military can't enforce this policy or they would lose half the people they have. So the loophole is to do anonymous drug tests to at least have an idea of how many people do drugs and try to fix it. But they really can't fix it or try at all. If they were to do normal drug tests, by law, they would have to act, which they try to avoid.

In CFB Wainwright, some untrained privates were stationed at that base for so long waiting for their occupation course (done after basic training) that they started using an empty building to cook meth. A janitor caught them. In all honesty, the CAF is so undermanned that drug usage is not even a minor concern, for all the military cares. As long as the member can do their job, it’s all good.

As an Immigrant, I Experienced Racism Behind Closed Doors

An issue that the CAF is actually a bit more concerned about is white supremacy, not only because it directly affects people like me—who are told at least once a week “fresh off the boats” like me have no business in the military, as we are all probably not loyal or simply criminals—but also because white supremacist groups keep sending recruits to get trained for the upcoming "racial war." When Trump was around, I would get told by a couple of my superiors that immigration should be illegal, Canada was for the whites, and First Nations were conquered so they should just shut the fuck up. I also went to boot camp with a guy who got white supremacist tattoos. It’s hard to tell who is a white supremacist or just a racist at work.

Something that did not quite make it to the media was our experience in Ukraine. Operation UNIFIER was the Canada training mission in Ukraine. These missions trained regular army units and some not-so-regular, like the infamous far-right Azov Battalion. I know some colleagues who returned from Operation UNIFIER with some funky ideas about people who did not look the same as they did. Some Canadian soldiers have even posed in pictures with Nazi symbology in Ukraine. The CAF is right to be worried about these guys; I mean, some have even attempted attacks, like Patrik Jordan Mathews and Corey Hurren.

And it’s not only far-right individuals; a significant percentage of Canadians are very racist (and hypocritical about it), especially toward First Nations, African Americans and anyone with an accent. Sgt. Marc-André Lévesque is a great example. He went around tour calling locals "monkeys" and "slaves." As for me, I was called a bit of everything but always in private, as it is in true Canadian fashion.

“”
It takes you a year to figure out that one guy who works next to you is a cokehead Nazi who actually hates your ass for speaking funny.

The Military Police Force Is Corrupt

And wait until you hear about sexual harassment.

For ages, the military had the same technique. Every time sexual harassment spiked, the military would claim it was a good thing since "more people were coming forward." Mandatory training would be taught, some juniors would get court-martialed, some would be released and some would get sent to Club Ed (Canada's military prison located in Edmonton). That way, the military could show the public were doing their very best, and if anybody asked, they had the numbers to prove training imparted, people charged and members released.

It all worked great until 2021 when Canada's top general (literally the highest-ranking general in the country) was involved in a sexual scandal. That same year, six top generals and admirals (including the replacement for the top general and the admiral in charge of HR) were under investigation. Those were the high profiles, but many more officers started to fall under allegations too.

Of course, the incidents that don't make it to the news are more sensitive because they could compromise national security, but the ones I have experienced range from everything from a colonel having child porn on his work computer, a soldier on tour raping locals or, the most common, a member drugging a female junior member and then raping her. I worked with a girl who got raped and pregnant. When I accompanied her to talk to the military police (MP), they refused to investigate because she could not remember who raped her after being drugged. In reality, even if she had known, the investigation would have probably led to nothing since the military police are infamous for not doing their job. Men get harassed as well, but in the military, it only counts if you are a woman. The only time I have ever heard of a woman was the case of Sub-Lt. Aidan Brownlee, who went around grabbing guys' genitals and got a simple fine and a slap on the wrist.

Talking about the MP, what a fun bunch. Not a shock that so few people report sexual harassment, considering how crooked and unprofessional MPs are. They are infamous for protecting their own, losing evidence and not doing their job by protecting higher-ups by dismissing cases or just refusing to investigate. I would rather ask a mall cop for help with an actual crime than go to see an MP.

MPs are supposed to be the incorruptible force in a military, made exclusively to maintain order and protect the law. In Canada, they only seem to exist for the government to show that we have "all the needed institutions" on paper to properly run a military. This reinforces the CAF’s mentality of "let's show the public we are trying, but let's just not actually do anything." It's truly frustrating because every time I’ve been to a civilian police officer, they redirect you to an MP since you are out of their jurisdiction. It's really infuriating you can't even rely on a police force.

“”
I would rather ask a mall cop for help with an actual crime than go to see an MP.

There’s Nothing Progressive About Canada’s Military

And it’s not only the personnel who are rotten; it is also the equipment and installations. While senior officers get private chauffeurs and live in hotels while in training (the CAF leadership always leads from the front, on paper), the rest live in WWII-era accommodations. I have signed multiple medical forms for asbestos exposure while living in shacks. On my last course in Ontario, I was in a building with AC that started in November (due to lack of AC funding), so in October, we froze. The CAF can't even buy proper equipment either. I shot WW2-era pistols and .50 cals that I think were used in Korea. And it's not just the army; the air force uses fighter jets that are almost 40 years old and navy submarines that literally sink or catch fire every time they sail. U.S. Marines always complain about their old equipment, and then they come to train in Canada. We have been actually described by them as a low-budget USMC.

Some of these stories make it to the media, but there is much more happening behind the curtains. I have not even mentioned what soldiers do on deployment. Since the ’90s, Canada has decreased the number of deployed peacekeepers, mainly because they keep committing atrocities. Even in Afghanistan, several Canadian soldiers committed all kinds of crimes. And I am not saying other militaries do not have the same issues, but only Canada uses the military as a propaganda tool to show the world how progressive they are. In reality, Canadians are just as nasty, racist, rotten and hypocritical as the people they publicly criticize, like their obsession to criticize Americans and Australians. And I don't know why; I have worked with Marines and National Guardsmen, and they cared less about my accent and skin color than my platoon. Sure, some were racist, but they were honest about it, so I avoided them. Canadians, in contrast, pretend to be polite and be NATO's standard, when in reality, it takes you a year to figure out that one guy who works next to you is a cokehead Nazi who actually hates your ass for speaking funny.

From an immigrant's point of view, I chose Canada over the U.S. and Australia because I believed the government propaganda. I thought that racism and corruption were not an issue in Canada and that the people had values and principles. In a way, Canada's international news on its military did help me build that narrative that drove me here, only to find out it’s just as bad but way colder.