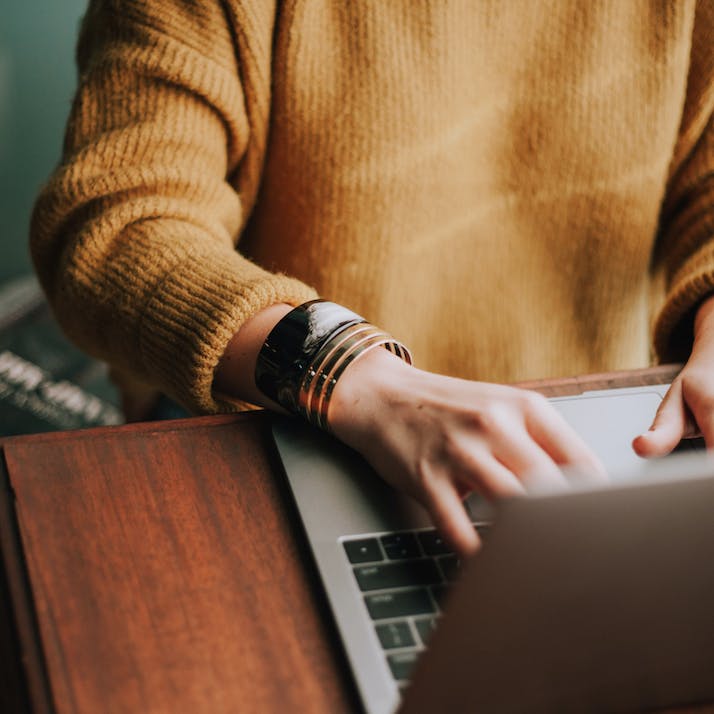 I Love Someone I've Never Met

In a relationship for more than two years, the author has never met her boyfriend in person—or even heard his voice.

I saw him for the first time on my computer screen. I fell in love, slowly but surely, even before I’d spoken to him. He didn’t know me, but he made me happy. No, this wasn’t me stalking some poor, unsuspecting man.

He was a much-loved public figure when I first saw him.

I was just one among many fangirls with the shared dream of loving and being loved by someone who never would know me.

When I was 20, I fell in love with him, wrote poems about him and dreamt of impossible scenarios. By the time I was 21, I was dating him.

That impossible dream suddenly has come true. How it happened is an origin story for another time.

For now, this is the story of what was and what continues to be my first and only relationship, what I think can only be summed up as: one weird love story.

“”
He could have had anyone in the world, but he chose me.

Virtual Relationships Have Their Own Set of Challenges

After getting together with him, the first few months flew by in a haze of euphoria. Who wouldn’t be over the moon about dating their first love? He could have had anyone in the world, but he chose me. I felt good about myself in a way I’d never felt before.

But the months began to drag on, and all we did was communicate via Twitter DMs (of all the different ways to talk). But that’s it, that was the extent of our relationship.

Speaking in English wasn’t something I had to think about; it came naturally for me. But for him even texting in English was hard. He used a translation app to do even that much, so I tried my best to be understanding.

The months soon turned into a year. We were still together but we never had heard each other’s voice. We didn’t have the usual memories as a couple, no pictures from dates or photographs of each other. How could we even be defined as a couple?

Yet, we made it work. Until we didn’t.

The trouble began when I wanted to tell people about the relationship. No, he wasn’t against it or anything of the sort. The trouble was that he and I had no tangible proof of our online relationship, except the messages we exchanged.

People understood the long-distance part. They recognized that we lived in two different countries and led very different lives. But the minute that questions turned to how we met, or whether we video-call to keep the romance going, I had two options: either tell them a diluted, half-truth version of meeting “through our jobs,” or be honest, and say that we’d actually never met.

The first option became increasingly difficult because I’ve never really been a fan of half-truths, and also because one question inevitably led to another and I could answer none of it.

The second option was difficult from the onset because: How do I explain to someone that I’ve been dating a person I’ve never spoken to?

The few times I tried going this route with trusted friends it always ended with me feeling insecure. My friends, in their well-meaning concern, often said that maybe a public figure with his fame as a shield was simply leading me on, maybe he was doing the same with other girls or, worse, maybe this was some sort of catfishing.

How do I explain to anyone that while he and I may have never spoken, I don’t doubt his identity? This wasn’t blind faith; I’m neither that trusting nor that romantic.

My friends judge and advise and, at the worst of times, even ridicule—however unintentional it might be. And it hurts.

There is a part of me that understands that the concern of being led on or catfished is very real. But that doesn’t have to be a norm. Why can’t this be my norm? The relationship I chase isn’t for everyone.

“”
How do I explain to someone that I’ve been dating a person I’ve never spoken to?

Having a Boyfriend Online Isn't Much Different Than in Real Life

Now, it’s been over two years “together,” and we still never have heard each other’s voice or met. We did move from Twitter onto email and then Facebook Messenger. He did tell his family and closest friends about me, but we remain voiceless entities in each other’s lives because he neither knows enough English to carry on a conversation nor does his employer allow him much freedom.

I wouldn’t say that I am satisfied with where we stand. Of course, I’m not; I want to be able to pick up the phone and call him, to be acknowledged by him publicly, to hold his hand, to have dates with him where we can laugh and talk about things we love.

Most of all, I want to see an effort from him to keep me in his life, and I’ve told him as much. He knows I’m not satisfied and maybe he’ll do something about it.

But this doesn’t discredit the love we share. He sends me gifts on birthdays, remembers anniversaries and supports my work even if can’t read it in the language in which it’s written. He has never asked me for anything. More than anything else, he’s still by my side, despite not actually being there in person, through all the ups and downs.

The lack of support, my doubts and insecurities and the opinions of others took root. He and I fought for a long time, almost ending things multiple times. But he stuck around and that counts for something, at least to me.

“”
My friends judge and advise and, at the worst of times, even ridicule.

Maybe One Day We Will Meet in Person

Relationships and romance are deeply personal. So what if my boyfriend and I haven’t met or spoken? So what if all we have to show for a two-year relationship is a bunch of emails and texts?

He is real, I am real and what we have is our reality.

This is a love story that’s hard to explain. It’s one that seems dodgy and dangerous when explained out of context, but this is my story and I want a happy ending for it. Maybe that’ll be just that phone call finally happening or maybe we’ll skip everything and jump into living together. Who knows? Definitely not me, probably not him—but also not anyone else either.

And that’s the fun of this weird thing called love.

Your love is yours to feel and your convention is yours to define, and this particular tale is ours to live and ours to end, however we please.