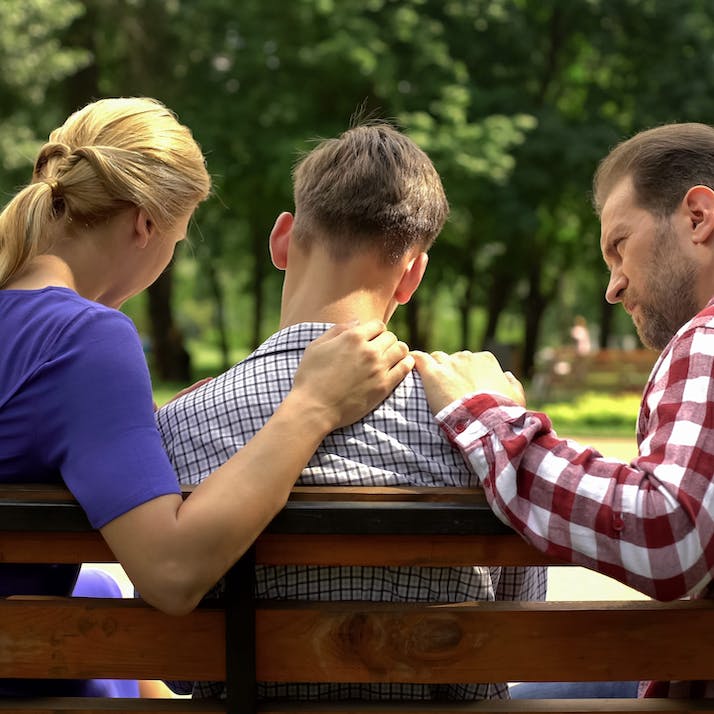 My Brother’s Mental Illness Is Holding My Family Hostage

He won’t treat his depression and PTSD, and they’re making our lives hell.

For over a decade, my family was at war with itself, stuck between a woman who would cry fake tears to try and elicit sympathy for “having her children taken from her,” when in reality, her children left because she was emotionally and physically abusive, and a man who our community saw as the villain because he came from a well-known family, who fought with all he had to make sure his children had a decent childhood. A few years after he divorced my birth mother, my dad married a wonderful woman who raised us, loved us and supported us like her own and who we now call Mom. In the end, after nearly 15 years of fighting to stay together, we finally won the war when the legal battle ended by default when we became legal adults and there was not much a judge could say about who got to “keep” us. Like in any war, though, there are emotional wounds that have remained long after the physical ones have disappeared.

I’m the oldest of three children. I was always expected to set a good example, to look after and care for my siblings, to be the responsible, reliable child. As the oldest, I also had the privilege of being hurt the least by our mother’s actions. I was old enough to at least sort of process everything when her aggressions started, old enough to speak up and stand up for myself and my siblings and old enough to—politely; I was still in court, after all—tell her to go fuck herself and stop contacting me. I was the lucky one in this way, and while I’m happy that I got off this easy, I constantly feel guilty that my siblings—and my youngest brother, especially—did not.

“”
The kid could do no wrong in our father’s eyes.

My brother was a toddler when all of this started. He was the target of most of our mother’s attempts to “win” the lawsuit—because really, all she cared about was winning, not getting her children back. He was the one that suffered through forced visitation dates and would be constantly used as a pawn in a legal battle that, in theory, was meant to make sure he grew up healthy and happy. As a result of this, my father became overprotective of him. The kid could do no wrong in our father’s eyes. “He just needs me to take care of him in a different way than you do,” my dad would say. “He needs more attention. You don’t understand anything. Things were always the easiest for you!” I’m guessing this was my dad’s attempt to overcompensate and try to “balance out” the bad in his youngest son’s upbringing. No boundaries were ever set for him, no responsibilities, no expectations, no nothing. The feeling of unfairness that came from my brother getting off easier than my sister and I ever did was annoying, sure, but always something I could manage and deal with. Until it wasn’t.

For most of his teens, my brother failed his classes, semester after semester. Where I had to work my ass off to keep a scholarship and deal with my dad’s constant pressure to “be my best self,” my brother would get a slap on the wrist in the form of a long sermon from my dad. He showed little to no interest in helping around the house, leaving my mom and me to deal with our pets, cleaning and laundry. Instead, he’d lock himself in his room and spend hours watching YouTube videos. He would have temper flare-ups that put all of us on edge. He’d scream, yell, punch and throw things around. Any attempt to calm him down would result in even louder yelling and even more things being thrown around. We had to wait for him to calm down on his own. My parents, my grandma and I would gather downstairs in the kitchen, listening to him slowly transition from yelling to crying loudly in his room. We’d look at each other, each of us visibly shaken from the adrenaline rush we’d just experienced. To say it was scary would be putting it mildly.

Except that mental health is not something we talk about in our family. While most of my family members have been diagnosed with one thing or another (I myself was diagnosed with ADHD as a child and generalized anxiety disorder in my early 20s), mental health is still somewhat of a taboo at home. It’s something that we are supposed to "learn to control" as we grow up. For years, we’d hear our parents and other adult relatives say things like, “Therapy is for crazy people” and, “I won’t tell a stranger everything about my life; dirty laundry is aired at home.”

So when my brother’s diagnosis came around, he vehemently refused treatment—no meds, no counseling, no therapy, no nothing. For a couple of months, it seemed like he could handle himself, that things would be OK, and he wouldn’t really need treatment. Then, COVID turned everyone’s lives upside down. My family went from having busy schedules to being stuck inside our house 24/7.

Being confined hit my brother the hardest of all of us. His mood would be affected by the slightest disturbance. We began to walk on eggshells around him. Ask him to clean his room? Screaming and shouting. Ask him to help with our dogs’ dinner? One day, he’d gladly do it; the next, he’d get so angry, he’d break his closet doors. It was night after night of hearing him scream, insult and berate our parents. He’s never physically hurt me, or anyone else in our family, but he’s broken and damaged my things. One minute, he’d be screaming bloody murder; the next, he’d be asleep for hours. One minute, he’d be threatening us; the next, he’d be on the phone with some friend or another, laughing his ass off as if nothing had happened.

I’ve become an emotional hostage in my own home. The place that was supposed to be my safe space is now plagued with trauma and fear. I can’t count the times my parents and I have had conversations about kicking him out, but they eventually decide against it. They say that despite him being in his early 20s, he’s not ready to be left to his own devices. Try as we might, we can't seem to get through to him and get him to accept treatment. We’re stuck—I’m stuck—somewhere in the middle of desperately wanting to help him and desperately wanting to live in peace, debating how much our family is supposed to tolerate in the name of unconditional love and support.

I constantly find myself wondering if I’m an awful sister. I should do anything in my power to help him, shouldn’t I? That’s the way I was raised, after all: to put my siblings first because “they would be all I had left” when my parents were gone. (My dad’s words, not mine.) I understand where my brother is coming from, and I have no doubt that whatever pain and suffering I’m feeling, he’s probably feeling much worse.

I'll admit, I sometimes feel like he's exaggerating his instability—or maybe even faking it—just to make us pay attention to him. He's actually admitted to wanting us to "know what it feels like" when we ask why he feels the need to act in such ways. I’m torn between feeling compassion and anger at my little brother for putting me through this. Am I an awful sister? I’m not really sure what the answer to that question is. Some days, I’m the worst, I think; some days, I’m OK. I want to be supportive, but I also need to take care of my own mental health. I'm struggling to find where the boundaries are.

I’ve realized I can’t help anyone else if I don’t take care of myself. So, while I might feel guilty about it sometimes (I’m conflicted about even sharing this story now, but my hope is that putting whatever I’m feeling into words and giving it shape and order will help me process it a bit better), I’m starting to put my own needs first. Maybe the way I can set a good example and take good care of him is to take care of myself first. To heal myself first.