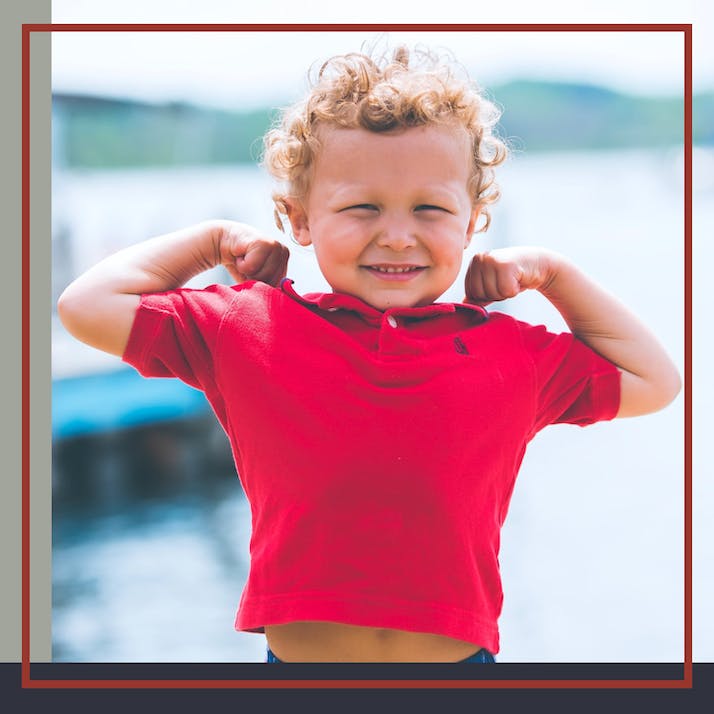 My husband became addicted to working out, and my son is asking about six-packs. I’m trying my best to change the narrative.

I consider myself to be a body-positive person. Gaining or losing a few pounds doesn’t really matter to me. Although I would be lying if I said it was something that I was born with—I had to learn it with the help of female empowerment and body-positive spaces online.

After having my son in my mid-20s, I vowed to teach him what I had to learn on my own as a teenager: that his appearance was not representative of his value. That he’s much more than that. I felt even stronger about body acceptance now that I had a post-baby belly pooch and a few extra stretch marks. On the days that I struggled—on one occasion, feeling sad after a daring attempt to squeeze into an old pair of jeans—I found myself trawling the internet once again for feminist mantras, self-love quotes and pictures of normal female stomachs. Like a hug from an old friend, I was comforted.

Something furious ignited within me as my son grew. I was determined to be a conscious parent, doing everything in my power to help my son to be a confident and self-assured kid in a world of Instagram, photoshop and body shame. On a warpath of empowerment, I armed myself with kids’ books about positive self-esteem and corrected myself when I used male-centric compliments, instead emphasizing his kindness rather than praising his tough exterior. I was learning. I still am now.

Of course, despite my gentle push towards more neutral toys, he loved superheroes, so I indulged his interests and let him play with them, unaware that these buff characters would ultimately be damaging for his body image and contribute towards the narrative that men aren’t worthy or respected unless they are physically very fit.

“”
What's missing is seeing real men's bodies rather than the sculpted, washboard, Greek-god abs in every movie and TV show.

One day, he eyed the plastic lines etched into his action figure’s torso and asked me when a six-pack of his own would be appearing. At this moment, my heart broke. I knew that he was starting to think about his appearance and compare himself to the world. I didn’t want this to escalate into a deeper problem.

I felt like I had failed as a mother. Where had I gone wrong?

Naively, I had never viewed boys’ toys as problematic. Girls’ dolls are a different story, however, as the majority of us are familiar with how their tiny waists, breasts and heavy makeup teach girls to internalize this as ideal. On the other hand, superheroes and soldiers represent everything that men are told that they need to be—strong, infallible, a fixer of all problems. Essentially, a hero.

It was like a lightbulb moment. “This is contributing toward toxic masculinity,” I thought. It didn’t feel right. Each action figure that my son owned had comically huge muscles, hyperrealistic bulging quads and vascular biceps, along with a sculpted six-pack. This is just as damaging as the girls’ dolls that parents tend to steer away from nowadays. In reality, a man would need a ridiculously low body fat percentage and a militant training regimen to maintain such a physique that these toys are perpetuating.

My Husband Got Hooked on His Body Image

I decided to do some research and found a worryingly empty space on the internet for men’s body positivity.

Instead, it was disproportionately female, celebrating authentic bodies at unposed angles and the refreshing sight of unairbrushed skin. Lines, creases and stretch marks that felt as familiar as my own. I felt torn, as this female-led space helped me with my own body image issues, but I was powerless to change the fact that men’s normal flaws and diverse body types just don’t exist in the media.

What's missing is seeing real men's bodies rather than the sculpted, washboard, Greek-god abs in every movie and TV show. The shirtless imagery that bombards us in every men’s lifestyle magazine.

My motivations for a men’s body positivity movement weren’t just for my son. I had seen my husband struggle with his body image for years—at one point, his normal interest in working out spiraled into an obsession. I recognized my past self mirrored in him as he would pass by his reflection and pinch the tiniest amount of skin on his toned stomach. “I just need to get rid of this,” he would say, fiercely gripping anything he could around his torso.

Helplessly, I watched as he would limit himself to just eating enough to meet his macros, some days drinking only protein shakes and exercising four, five, even six hours a day. My concern intensified as it escalated. I caught him taking dangerous fat-burning pills that he had secretly purchased from shady websites. Later, he confided in me that he was considering using steroids because, according to him, it was common amongst his friends.

He was undeniably in amazing shape, but at the price of risking his health and falling into disordered eating behaviors, it was not worth the immense damage it was causing.

“”
I couldn’t ignore that he was made to feel this way by society and the media.

We Need to Have More Conversations About Male Body Positivity

I couldn’t ignore that he was made to feel this way by society and the media.

Men’s pressures to be ripped have been packaged as a fitness movement that is obtainable with normal gym habits. Actors and popular male fitness social media stars, who dedicate every waking moment to being in shape, often have personal chefs and trainers, and some use steroids to reach insane levels of being ripped very quickly. But they all declare that their muscular physique is the result of hard work and a good diet, which is highly problematic.

My husband is now in recovery from his exercise addiction and complicated relationship with food. We tell our son that it’s OK if he wants to exercise when he’s older, that not everyone can get a six-pack. And that’s OK too. But more importantly, we emphasize the importance of practicing emotional honesty. While I can’t change the world alone, I can make small changes in my language and teach my son to be empowered and remain unphased by this outdated rhetoric, and encourage other men to share their stories.

The facts are clear. Male body image needs to be discussed. Healthy doesn’t always look like a six-pack. Men are still valid and important if they’re not muscular. The notion of a “perfect physique” is not real.