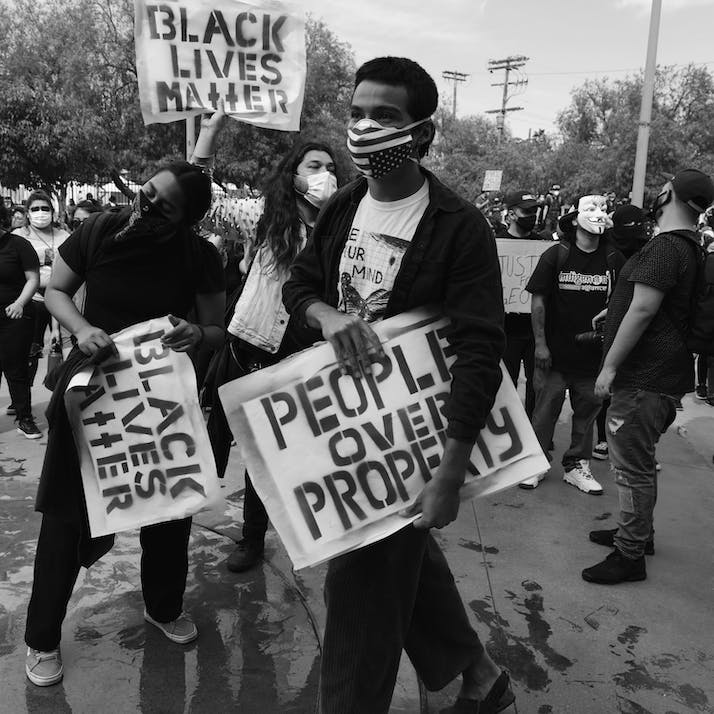 Each year on Martin Luther King Jr.’s birthday, prominent leaders, politicians, pastors and residents of my small hometown in North Carolina participate in marches in his honor. The speeches commemorate how far we’ve come as black people and invigorate us for the fight to come: the work towards equality is far from over. It was a tradition I was honored to be a part of as a child.

However, what I underestimated then was just how long we, as African Americans, would be in this war against systemic racism, oppression and prejudice. Decades have passed since the civil rights movement and history continues to repeat itself over and over again. In spite of the physical removal of “For Whites Only” signs, we are still living in two vastly different and segregated worlds in America: one is black and the other is white.

The first protest I participated in as an adult was in 2012. It honored Trayvon Martin. That day—my one- and nine-year-old nephews in tow—I sported a hoodie similar to that worn by Trayvon when he was hunted down by the racist vigilante George Zimmerman.

In the days surrounding his death, I bought the two items he had on him: an Arizona iced tea and a bag of Skittles. Standing in front of my mirror, I held these items in varying ways trying to understand how anyone could’ve mistaken them for weapons or threats. Rotating from side to side and front to back, I couldn’t make that distinction. I couldn’t figure out how these items equated to the loss of a life—a child’s life at that. My mind immediately began to think of my eldest nephew, who wasn’t far from Trayvon’s age. I knew then that my fight against racism had become personal: My nephews were now targets for racial injustice and police brutality. I knew that in our neighborhood of predominantly white people, someone could see my boys in the yard and take it upon themselves to play God, to take away life. Perhaps, to them, my sweet innocent boys' lives weren’t worth living because of the color of their skin.

“”
One is black and the other is white.

There’s a Long March Ahead

In the eight years since Trayvon’s death, it’s hard to know exactly how many more black people have been the victims of blatant and outright racism, with many of their deaths unknown due to lack of national attention. We’ve seen police attack black toddlers, brutally beat black men and murder black women in their beds. The cops usually receive paid administrative leave.

We’ve heard audio recordings of agonizing deaths and watched body camera footage replayed on the six o’clock news like the Friday night football reels during homecoming season. We’ve witnessed white women using 911 as their personal customer service hotlines for theatrical calls of distress about black people doing everyday tasks. We’ve seen black people get significantly harsher punishments than their white counterparts for the same or lesser crimes. We’ve relentlessly explained how problematic the stance “All Lives Matters” is; our calls continue to fall on deaf ears. Even with the innumerable cases of systemic racism, microaggressions, prejudice and discrimination, the reality of being black in America has been devalued.

The protests erupting globally in the wake of George Floyd’s death are both the largest and most violent that I’ve ever seen. Much like those MLK marches I participated in as a youth, the local protests I’ve attended in honor of George Floyd have both commemorated how far we’ve come and invigorated us for the road that lies ahead.

Total Rebellion Is All We Have Left

However—never in a million years—would I have imagined that my small North Carolina town would be under two-day curfew because businesses were vandalized in the name of justice. Even more surprising has been seeing white-owned businesses stand in solidarity of the Black Lives Matter movement. (Some have welcomed artists to paint murals on the boards that replaced the windows to their buildings.) What the world is seeing unfold these past few weeks—a shift from peaceful protests to riots and back again—is the straw that broke the camel's back.

In this fight for equality, we've tried every form of acceptable rebellion: complying with police, voting, rallies, kneeling during the national anthem, forums, petitions and running for public office. And yet our lives are still reduced to trending hashtags on social media—if we’re lucky. Despite the popular Martin Luther King Jr. quotes white people use to ease their guilt, let us not forget that "peaceful" Martin—the same Martin that was assassinated by the way—also said, “A riot is the language of the unheard.” Black Americans are tired of being unheard. Undoubtedly, there will be property casualties and job loss, but if all this shit has to burn down before our voices are heard, before we can dismantle a system that wasn’t created to protect black people: Let it fucking burn.