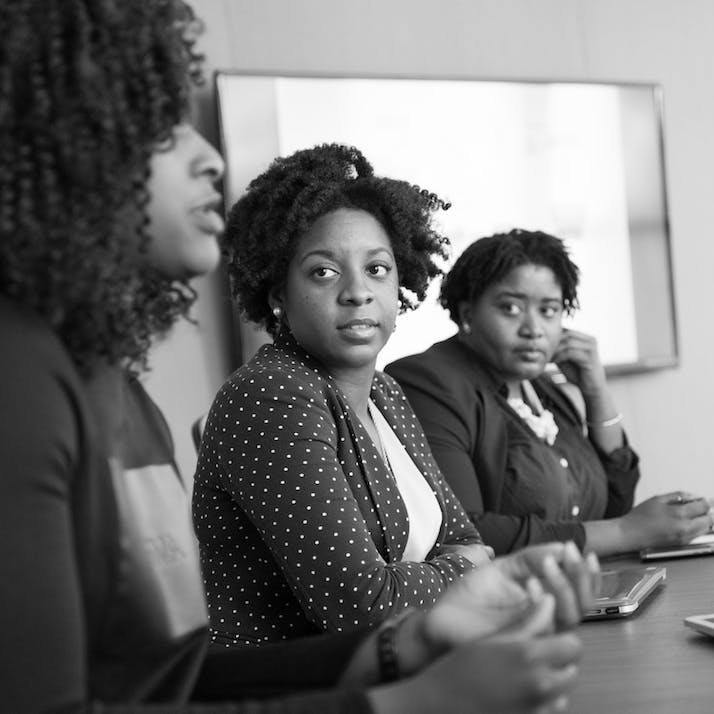 Black CEOs Won't Save Us: On the Music Industry and the White Gaze

Too many Black artists are being forced into the radio-friendly, white, marketable mold, which starts at the top.

My first and only job in the music industry was a summer internship a few years ago. On paper it was perfect. I would join a newly established independent label founded by someone who had been a high-level executive at a major recording company before leaving to establish their own, intimate project. And not just anyone—a Black woman. It was revelatory. It was perfect. Finally, I thought, representation in the industry. And finally, I thought, having a role model who looked like me.

Stepping into my role as a member of the small team, I was eager to immerse myself in all aspects of the business and hopefully find a foothold in the industry. Because this was a new company, there were many opportunities for growth, our CEO told us. So I narrowed my eyes in focus and threw myself into my work. If everything went how I imagined, I might have just found a career. Possible futures flashed before me, and they looked like a dream.

My Dream Job Wasn’t What I Thought

In practice, everything seemed like a good sign. The label was dedicated to its values not just in theory but in practice—at the time, they had one artist whose main selling point was diversity. Focused on quality rather than quantity, the whole label put its energy into preparing the artist, their music and their image to debut with their first single. It was the immersive experience I had dreamt of with a goal I could get behind in mind: broadening the scope of representation in the music industry. I got to travel to the recording studio, give my opinion on auditions, listen to song drafts and demos, connect with PR & Publishing at major labels and publications, all under the close mentorship of a Black woman. It was my dream job…and I hated it.

When the first dull pangs of dissatisfaction hit, I convinced myself that my inexperience was the cause. After all, I knew enough to know that even at a dream job, not every second is going to be a dream, especially as an intern. However, despite my pep talks, my mantras and my determination to throw myself even further into my work, I could not shake the feeling that something about this job, this ostensibly perfect job, was not sitting right with me.

It was in the little things—every little thing. While assisting the publishing team, we took inspiration from the success of other artists, but those other artists were all white. While assisting the A&R team, we watched auditions and scouted for talent based upon a variety of metrics, and I couldn’t help but notice that the “image” of artists were taken unspokenly into high consideration. Sure we called it “personal brand” or “fit,” but the more conventionally attractive girls were heavily considered over others. And though I made excuses, telling myself that this was exactly what we were fighting to change, that the representation our artists would bring would change the industry, it became clear that our artists would, at best, be the exception to the rules, rather than change the rules themselves.

The Industry Is Made of White, Rich Men

What I was beginning to learn was that we were working to squeeze a new artist into the hegemony, rather than broaden the gaze itself. All of our metrics and our templates, the patterns that would lead to success, depended on proximity to whiteness. Our artists had to emulate the very best of the industry, and according to the industry, those were white artists. Sure, mention of the occasional Black artist came up, but Black success was seen as an outlier, or reserved for a very specifically-marketed type of hip-hop artist.

Disillusionment gave way to anger. How could a Black CEO let this happen? Was it not hypocritical of her to privilege the white gaze? I was disappointed because it felt like I had been lied to. I was disappointed because I had been staring wide-eyed all summer at this woman I wanted to emulate, and without warning the whole illusory thing collapsed.

However, beyond the initial feeling of betrayal, it didn’t take long for me to see her with compassion. Learning more about her trajectory to starting her own company, which had been a long, hard-fought road, I realized what she must have realized all those years ago: the industry was not about individual artists or even the audiences—it is about white men with money.

Overwhelmingly, CEOs, producers, board members and people who make decisions in rooms I will never be in, are white men who want to make as much money as they can while using as little of their own as possible. Most of these men are not even musicians or inclined to take a vested interest in the contemporary landscape beyond metrics and dollar signs. What they know is what works, so they rely on formulas that have been successful in the past. Sometimes, unconventional artists will break through, but the unpredictability of straying from the well-trodden path is not attractive to them, so they prefer to limit their risk. And anything that strays from the hegemony is a risk.

“”
Overwhelmingly, CEOs, producers, board members and people who make decisions in rooms I will never be in, are white men who want to make as much money as they can while using as little of their own as possible.

My Label Didn’t Want to Shift the Power Structure

It wasn’t my Black female boss who was the problem, it was the way the landscape had been configured to privilege the persistence of hegemony in the industry. Power wasn’t in raw talent or individual artistry, but in proximity to the tried and true: radio-friendly, marketable whiteness. When I think of artists whose stories are not like that, I remember that Frank Ocean was ignored by his label until he made Nostalgia, Ultra, which made him impossible to ignore. Or even how Lil Nas X’s fame came from controversy that began with the industry not wanting to classify his sound as country. There is always pushback, and the success stories we know are in the minority—usually the industry’s interests come out on top.

My boss was at least trying to focus on underrepresented artists, to push them through a narrow door. The logic was that the more artists of color became successful in the space, the easier it would be for other artists of color in the future. If we proved that diversity was in demand, that there could be mainstream success for our artists, industry leaders would be more inclined to take risks. Yet, though I understood the reasoning, I still couldn’t get behind it. After all, with hip-hop becoming the new pop music, we have many successful Black and brown artists, just within a limited sphere. The number is redundant if the sound, the aesthetics and the commercial marketing feel tired and familiar. Maybe I’m an idealist, but clamoring for white approval didn’t seem like the way to change the industry. Shouldn’t we be shifting the power structures? Shouldn’t we be demanding a different gaze?

Though my internship happened a few years ago, I felt the echoes of my conversations there in June, when the country was reckoning with the racial landscape as a whole. Still, the solutions that most companies chose were attempts to add superficial diversity into the landscape. But Black CEOs won’t save us. If the landscape itself still revolves around whiteness, the only thing that will garner is a dilution of everything that doesn’t seek to mimic whiteness. All the representation we will see is just a darker face on the same aesthetics and sounds, not any actual diverse set of aesthetics and sounds. To me, it seems that this approach will only make it harder for innovative artists of color to break through. If the industry is satisfied with cookiecutter tokens, then they won’t actually take risks on artists they don't know how to market.

The Music Business Must Break Free From Oppressive Structures

Grammys were announced—showcasing the Academy’s limited understanding of the contemporary musical landscape, especially when it comes to non-white artists—people questioned their validity. Even with the title changes of some of the awards like “Urban Contemporary,” it felt transparent that non-white artists were seen within a limited scope.

However, the conversation still needs more nuance. That’s because it remains focused on the idea of “representation,’ that we just need more people who look different to be accepted by the industry. But what we need is to change how the industry looks, feels and functions. Currently, it revolves around a whiteness that is insufficiently examined. It revolves around a pattern of selective inclusion that serves the persistence of whiteness at the center, with everyone at the margins, begging for recognition in vain hope. There might be a way to change this, but, as I realized that summer of disillusionment, it doesn’t start at the bottom, it doesn’t start with Black CEOs—it starts at the top.

It starts with imagining how we can break from the ultimately oppressive structures that have always ruled music, which is a business above all, and make something new.