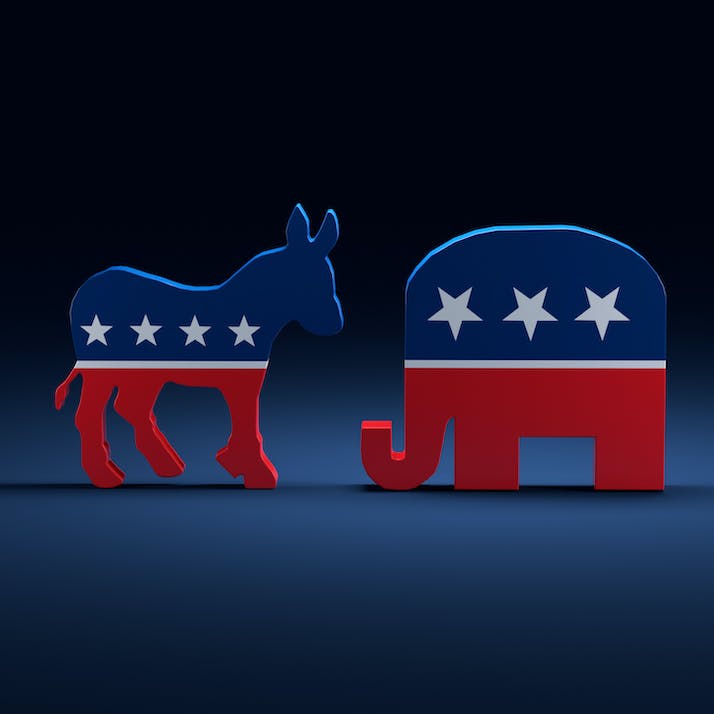 We’re Best Friends, Co-Workers and on the Opposite Sides of the Political Spectrum

Two pals explain why America needs a friendship like theirs, now more than ever.

I’m a liberal. That’s why my alias is True Blue, after all.

My best friend, Red Rover, is a conservative. In other words: heresy. Today’s political climate has painted Americans on opposite ends of the political spectrum as something we should never, ever be seen as: enemies. Yes, our political and religious ideologies are different. Our ideas on how to make our country stronger, smarter and more competitive locally and globally are different. Our views on taxation, welfare programs, spending and immigration couldn’t be further apart. He is my red-blooded opponent, and I am his bleeding-heart competitor.

And I couldn’t find a better person to call my best friend.

When I was asked to write this article, I was saddened at the thought that Americans have divided themselves so thoroughly that, somehow, two people voting different tickets inferred that a solid, loving, long-lasting relationship could never work. Because what we have together is exactly what Americans, and, indeed, the world, needs so much more of.

“”
What we have together is exactly what Americans, and, indeed, the world, needs so much more of.

A few years ago, there was an incident at the U.S.–Mexico border. A unit of the Border Patrol tear-gassed a group of migrants, including children, seeking asylum in the U.S. After hearing such an upsetting headline on my commute, I did what I always do. I went straight to my friend, who is also my co-worker, to talk about it.

I’ll admit, in these situations, I come in hot—ready for a vigorous discussion. I thought this was an indefensible action and another point for Team Democrats. For a lot of people, an argument like this is the kind of TNT that could blast a hole right through a friendship. But, I’m here to tell you, it should bring you closer. And here are the three rules to make that happen.

Listen. And I can’t stress this enough. You have to listen to your friend and their opposing view. If you’re willing to hear them out, they will hear you out, too. In the case of the migrants, I told my friend what happened was inhumane. And guess what? He agreed. But he also brought up a point that I wouldn’t have thought of otherwise: What is our Border Patrol supposed to do in this situation? A large group of unknown people are trying to illegally enter our country. Should we protect our border or not? We both agreed that we should. Then, we talked about something else: Why this event even happened in the first place. Listening to each other eventually led us down a path toward solving the problem. How can we make sure our borders are protected, while also quickly identifying refugees who need asylum?

Equally important as listening is the willingness to change your mind. I often think this trait is viewed by some as a weakness. But it absolutely is not. It’s a profound strength. I see it as the cornerstone of learning and creativity. My friend and I are both willing to budge on an issue if an argument is good enough or if we independently come across new information or a new angle. Yes, I’m absolutely going to poke and prod his arguments to death. I’m going to ask a ton of questions. I’m going to play devil’s advocate even if we agree on the same thing. And I’m absolutely going to change my mind if there’s a better argument or policy decision to be made. I know he’ll do the same. I believe this process does something else, too. The willingness to change your mind and consider the weaknesses of your opinions and philosophy will strengthen your beliefs.

So, let’s apply this process to the case of the migrants. Did either of us change our minds on the issue? I don’t think so. The action by the border agents was too aggressive, as many innocent bystanders were tear-gassed. The people who were rightfully frustrated shouldn’t have rushed the border. And the policy decisions made by the Trump administration to substantially slow down processing migrants at the border has been ineffective and has led to despicable things. There was no right or wrong side of this particular event. It was horrible that any of it happened in the first place.

My last chunk of insight for what makes our type of relationship work is that you both have to agree on the basic facts, events and information you’re discussing. There’s no way my friend and I could have a decent conversation if one of us believes Breitbart has journalistic integrity and the other believes every Facebook post they see. Yes, some news organizations have a bias. Some have blatant agendas and ulterior motives. So how do my friend and I navigate this world? By looking at multiple sources and fact-checking each other on the spot. We look to see how Fox News, CNN and NPR report the same story. What does Fox leave out that CNN doesn’t? What did AP gloss over that NPR highlighted? Facebook articles and tweets don’t count. Ever. We’ll look at The Atlantic, CBS and Newsweek.

“”
Conservatives and liberals need each other.

So back to the migrant example. When I came into the office to talk about it, I only had one source: the NPR story I heard on my commute. When I brought it up to my friend, the first thing he did was turn to his computer and look it up. I did the same. He went to CNN. I went to Fox. Then, we talked about it more. He fact-checked me when I brought up recent border policy decisions. I fact-checked his ass right back. By the end of our discussion, we both walked away more informed and well-rounded. We also ended the discussion without feeling angry at each other. In fact, I don’t think I have ever been mad at him for talking politics. Probably because I know he wants the same things I do: a better country, a better future for our kids and a better global presence. Our core values are the same. We just have different ideas on how to bring them to life.

Conservatives and liberals need each other. It’s a good thing that he and I see each other as opponents, not enemies. We’re trying to do what’s best for all of us. Sure, there are people who just want their side to win no matter the costs. And that is the biggest problem we’re facing as a country. So, I challenge you, the reader, to debate the opposition and debate them with respect. Who knows, you might just make a lifelong friend.

By my memory, November 26, 2018, was a mundane Monday. My best friend arrived at work, plopped down in the seat next to me and spilled his horror at the latest juicy political shortcoming of today’s America. This time, Trump’s Border Patrol tear-gassed a group of migrants that had tried to cross the border. Men, women and children too!

Now’s probably a good time for a contextual interlude.

I’m a red-blooded conservative. I’ll spare you the manifesto, but I believe in a pull yourself up by the bootstraps version of the American Dream, one where anyone can become anything if they work hard and are smart enough. I believe the government should exist in as minimal a role as possible. But one of those roles should include, ya know, making sure people at least show a passport when they cross the border into America.

My best friend in many ways is diametrically opposite me on the political spectrum. I’m not up on the lingo, but I’d describe him as an ultra-progressive: the Bernie Sanders-loving kind. His version of the American Dream includes a step stool for those that need it, courtesy of the federal government.

For most, apparently, differences like this would preclude any lasting relationship. But as I said before, he is indeed my best friend. I don’t think pairings like us often exist in the wild. Not “in this climate.” It’s a shame.

Red Rover: Disagreeing Is an Integral Part of Our Great Friendship

So, on November 26, 2018, like most days, we talk current events. This time, it involved tear-gassing children. My best friend was pretty disappointed. And this was just one of a string of failings on the global stage that makes America look more and more like, I don’t know, Nazi Germany or something. I mean, these are just migrants, how can we do this to people? Where’s the empathy in this situation?

Of course, I bring a little different viewpoint. These specific migrants bum-rushed the border, knocked over a fence and were attempting to run across it. Realistically, what action could America have taken that would have both stopped the rush and also come across as more humane? I can sense some judgment coming: but no, I don’t want America to have to tear gas anyone. And of course, it’s a shame. But again, what other intervention would improve this situation?

This conversation is probably at a breaking point for a lot of people. Rage at the world channeled into rage at the other person and their beliefs. But this is my best friend. And this is normal for us. In fact, conversations like this galvanize us. We enjoy it. Because if you really are best friends, should any topic be off-limits?

“”
We actually enjoy the discourse.

Red Rover: Try to Change the Minds of Those Around You

Here’s how we work: We actually enjoy the discourse. If I’m honest with myself, I think arguing is fun, at least when it skews towards debate. My friend is very smart. I think I’m kinda smart too. He’s informed. He’s a worthy opponent.

We play a game of sorts. It’s not officially named, but if it were it would be called “Change My Mind.” The moniker hints at a key aspect of the game; we’re both actually willing to budge. Without this personality trait, what’s the point? There’s a saying I like: “You’re like arguing with a fence post, digging it up and arguing with the hole.” Don’t be the post, or the post hole and this game may work for you.

In the case of the tear gas, I could argue that I won the debate. I’m sure I argued that we have to keep our border secure. If these migrants could walk in uninhibited, what’s stopping anyone else? It’s not like I’d expect to be able to waltz into Canada. I probably argued that the migrants should have gone through the proper channels, waited in line and filled out the paperwork necessary to enter the country legally. After all, I do believe that’s how it should work.

But I don’t exactly remember the case I brought forth.

I do remember that after some time we were able to find common ground. This isn’t unusual for us, it’s how most of these debates seem to end. I believe our agreement was this: It sucks that this had to happen at all. I mean, what led a group of migrants to rush the border? I don’t think this is a political statement; it sounds like desperation. Yes, they should have entered legally, but maybe that process is so difficult or time-consuming that they for some reason thought their best option was to literally charge a chain-link fence to get in.

And I do believe this is a place worth “getting into.” I think my friend would agree. So, go find yourself a Democrat for a chat. They’re not so bad.