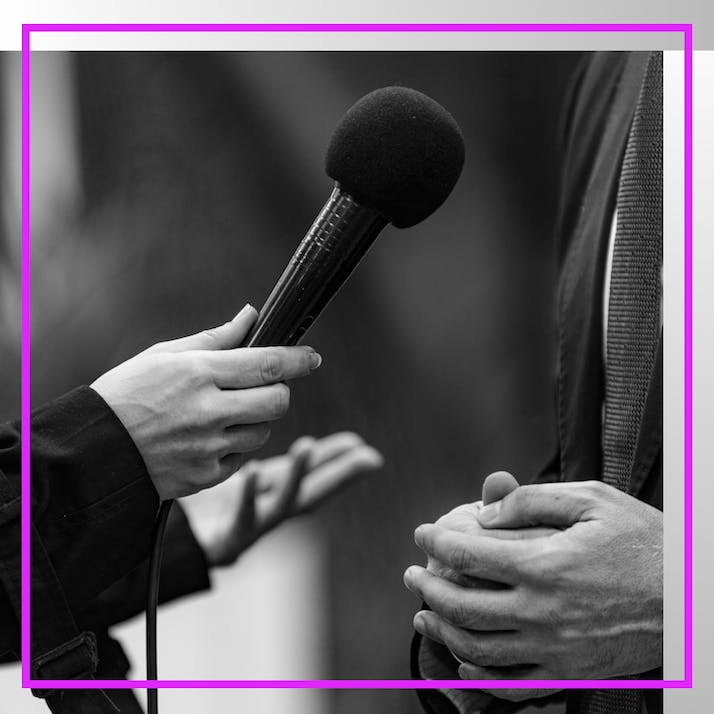 As Journalists, Being Unbiased Means Taking a Side

To speak truth to power, journalism has pivoted to activism, and it’s better for it.

“We are taking a side,” my journalism professor told me. “Get over it.”

Nearly a decade into my journalism career, at 30 years old, I had circled back with the man who taught me to be a reporter. We had a discussion about some things I learned, and his words were as refreshing as they were direct. “Get over it” was more of a freeing, marching order for me than a statement directed at me, and, frankly, it was more of a clarifying confirmation than it was convincing.

While I’d spent most of my career in sports, by the summer of 2020, I was considering a career swerve into politics and had real concerns about how journalism had contributed to where we were as a country: hurting and divided, where truth itself was up for debate.

On its most basic level, journalism is merely the collection and editing of news for presentation through the media (as defined by Miriam-Webster). However, the true definition of journalism has a much higher meaning. It’s built on truth and accuracy. It’s performed by people who are diligent and even, at times, brave. Journalism, my professor told me, is a form of activism that has a point of view. It allows people to participate in democracy and any other number of social entities, from discussions of sports and entertainment to medicine and public safety.

This fact wasn’t something my professor had come up with, but something instituted by the founding fathers themselves. Freedom of the press was solidified first so that democracy could grow. Establishing that journalism not only can, but should have a point of view is imperative. It allows for journalists to be fair and factual around contentious issues that might appear “biased.”

As is taught in every journalism school in the world, if one person says it’s raining and another says it’s not, the reporter’s job is not to tell everyone what each person said. It’s to go outside and find out.

Our conversation started with a discussion about policing.

When I was in school, we were taught that the first step of reporting on anything that included the police was to touch base with the Public Information Officer of the given department. They would give you what you needed to know, and you could build your reporting around that information.

However, by the summer of 2020, it was beyond clear that trusting the police’s version of events was a good way to not report the truth. Especially if the events in question more directly involved the police themselves. To quote another folksy saying from J-school, “if your mom tells you she loves you, you better double check.” And if we have to check mom, we damn sure better be checking the police.

Today, the process of teaching reporting has shifted significantly. My professor has embraced the idea that journalism exists to speak truth to power—that it’s a form of activism. When reporting on crime and/or policing, public information officers are still a part of collecting the entire story, but there is a significantly larger emphasis being put on talking to everyone else involved.

That was always a part of the process, but weighing various versions of events has taken on real urgency.

“”
Journalism exists to speak truth to power—that it’s a form of activism.

Republicans Have Disproportionate Control Over Legislatures

As our conversation shifted from police reporting to politics, we lamented that far too much political reporting had turned into scorekeeping, not substance. Sentences often begin with “Democrats say this” and “Republicans say that,” and while establishing where each partisan position lies is important, it’s the job of journalists to suss out who is telling the truth.

If journalism is activism, the act it’s performing is informing all of its citizens about how their lives will be affected.

Nearly five months before Donald Trump lied about an election he lost, and eight months before the insurrection on the Capitol, my professor wondered why journalists weren’t upholding that standard when it came to democracy itself. By last summer, Republicans were deep into trying to manipulate the Census for more favorable voting outcomes, had instituted voter ID laws that disproportionately affected traditionally Democratic voters and were working on other measures to retain their power in what would unquestionably be undemocratic, minority rule.

While that last sentence may seem harsh, biased and partisan, it is simply a fact. Republicans have won one national popular vote since 1992. They have implemented a number of policies across the country to gerrymander districts in their favor, as have Democrats, although to a lesser degree. Republicans in states all across the country have created disproportionate control over state legislatures when compared to total vote counts, and progressive policies consistently poll much better on nearly all issues in the United States than conservative ones. The amount of representation for Republicans is outsized compared to Democrats.

Pointing that out is not “taking a side” or expressing bias. It’s reporting facts and reporting on widely accumulated data. So long that they are not manipulating the data or context, reporters need not  worry about facts that reflect poorly on a person or group. That’s not their job. Remember, some people think minority rule or having politicians pick voters instead of voters picking politicians is a good thing. Consider: Vladimir Putin.

Journalism Should Never Protect People From the Truth

Looking for a non-political example? In 2015, the media pointed out that all 20 acting nominees for the Academy Awards were white, which, thanks to activist April Reign, incited a social media campaign branded #OscarsSoWhite. The all-white nominations don't have to explicitly be called bad, unfair, unequal or even racist. That’s an opinion easily formed on its own. But shining a light on that standalone fact allowed for a larger discussion about inclusion, structural barriers and discrimination in entertainment.

Simply put, as journalists, it’s not our job to protect people from the truth. While it’s easy to say that on principle, it can be hard and uncomfortable in practice. We’ve all had to report unflattering things about people we like. In my time as a sports reporter, I’ve had to tell the truth about everything from poor play to much more serious off-court or off-field transgressions regarding athletes I not only respected, but with whom I had developed good, working relationships over the years.

It doesn’t feel good when you know the athlete, politician or celebrity as a human being, but human beings make mistakes. I reported what I had to anyway.

“”
Simply put, as journalists, it’s not our job to protect people from the truth.

The key word is “professional,” and it’s our job to report the truth no matter what. If that reflects poorly on someone—no matter how nice they’ve been to you and no matter how much information they’ve given you on any number of occasions—then the unflattering truth is ultimately their problem. That has to include reporting on ourselves. The change that can be spurred from exposing that truth, especially in areas as vital as democracy itself, is how journalism serves the public.

Journalism is a form of social activism. It exists to inform and to allow people to make the best decisions possible about everything from self-governance to how to spend their time and money. It’s journalism’s job to take a side: the side of the truth, and thus, the side of all of us, the people.