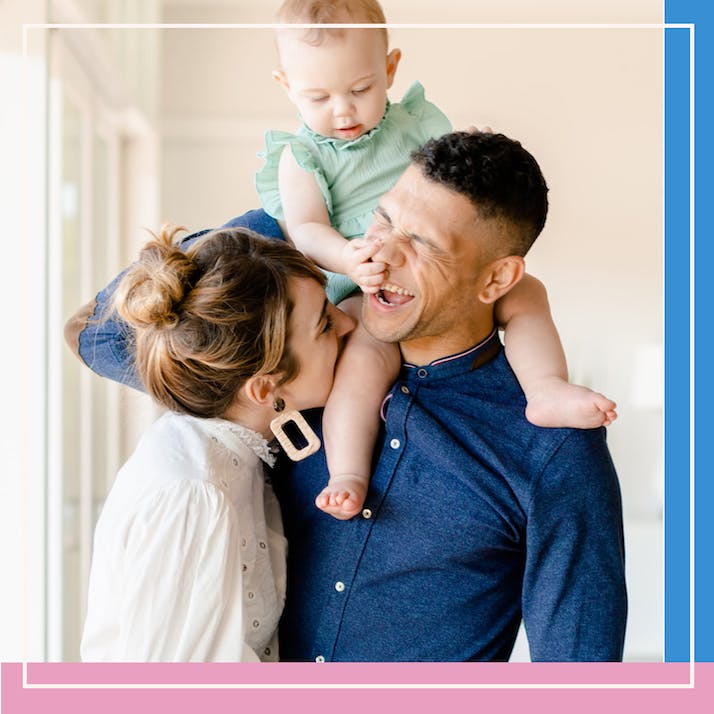 I'm an Autistic Mom Married to an ADHD Dad: A Parenting Match Made in Heaven?

Our "quirks" complement each other in ways we'd never have guessed.

It’s a tale as old as time: man meets woman, man wants to get woman’s attention, woman spends months jumping on nearby shelves and hissing, wondering why this person she doesn’t know is attempting to converse with her. (OK, so it was more like exchanging basic pleasantries, but still, why is he talking to her?) Finally, man asks about her dog, and conversation ensues. Then, they get married.

Let’s take it back a step. The man has adult attention deficit hyperactivity disorder, first diagnosed as a child, then again as an adult. He’s funny and always game for anything. When he was growing up, he may not have been great at turning in assignments on time, but it was the 1990s—there were no Individualized Education Programs, and children with ADHD were just “disruptive” and overmedicated into zombie-like compliance.

Now he’s mastered the art of getting people to open up. “I feel like I’ve known you forever” is a common refrain among new acquaintances. He’s kind, engaging and a social architect who can take a group of shy strangers, find common interests and facilitate what ends up being a great conversation.

The woman has autism spectrum disorder and made it to her 30s before being diagnosed. From a young age, she’s studied her peers to know how to behave in almost every situation. Faster than you can blink, her quick brain can pull up a stack of suitable words and facial expressions from its Rolodex of human behavior for her to select from in different social situations. This is called masking, and autistic women are typically socialized to do it more than autistic men. While masking correlates with mental health conditions like depression and anxiety, it’s also helped her survive socially for decades—that and rules.

My Husband and I Approach Parenting Situations With a Different Lens

As you might’ve guessed, I’m the woman on the spectrum, and the ADHD man is my beloved husband. We’ve always complemented each other, but nothing has challenged us or brought our life experiences to the fore like raising a child.

We have the world’s most stunning 3-year-old son. “Three and a half,” he would correct me. He’s radiant, far too bright for our good and so gorgeous that people stop us on the street to tell us, like we don’t already know. Like all parents, we want our son’s childhood to be better than ours. My husband desperately wants him to have an accepting learning environment, especially if he has ADHD, and not have an eponymous corner in school because he’s “trouble.” I want him to mesh easily with his peers.

Recently, he participated in toddler sports exploration. The eventual recipient of the “Mr. Independent” award, our child frequently would do things like sprint across the field while the other kids lined up for an activity or kick a basketball around instead of practicing chest passes. I fret about social disasters, especially since the pandemic stunted his social development.

So there I am, chasing him, encouraging him to join the group and getting frustrated when he wants to sit across the court and watch while the other kids engage in an adorable, chaotic frenzy our coaches generously term a “scrimmage.” Alarm bells ring in my head. I recognize my social anxiety is my issue to manage, not my son’s, but I can’t shake my lifetime of training that tells me that following rules is a way to stay safe—not just physically (although listening and not running off is a thing we’re working on) but socially safe. You know that Rolodex in my brain that covers most situations? When it comes up empty, and I don’t even have a loose script to follow, I panic internally.

Then, who goes dashing across the court kicking a basketball (wrong!) but my husband. He whoops as he kicks the ball to our child, and it goes wide left. Our son gets up and runs after it, laughing. They run around and are goofy together, and I’m in mental anguish over the non-script-following of it all.

We discuss it later as our son gathers dandelions. Where my angst blinded me, my husband saw our son needed someone to meet him where he was. I’d forgotten what I’d told our child is the number one rule of any sport: to have fun. My spouse was anguished as a child because his executive functioning challenges made it difficult to learn and behave like his peers, and he wishes he’d had someone who engaged him in activities in different ways. He can be that figure for our son, and I could learn a thing or two from him.

Now, you might guess I have low emotional intelligence. You’d be wrong. I’m painfully aware of others’ feelings and entirely in tune with my own. My husband says he’s never known someone who can articulate their feelings as well as I do. I credit my excessive calmness, logic and an overthinking brain. While my Socratic method of drawing out his thoughts irritates him sometimes, it also comes in handy.

I’m a serene lake. My husband is more of a geyser. His emotions flare and vanish before he can identify, much less articulate them. Emotional dysregulation and low frustration tolerance are hallmarks of both adult ADHD and toddlerhood. Can you see how this might be an issue in our house?

“”
We bring our lessons learned, challenges and life baggage to the parenting table just like everyone else.

The other night, our helpful toddler bounces into the kitchen to help dad cook, not wanting to hear that dad wants space in his cooking realm so he can hyperfocus without distraction. They both get frustrated and upset, and the situation devolves.

I step in, sensing the pressure building beneath the surface before my spouse pulls out the first and middle name. I call a time-out and hold our kid, asking questions to help him say what he wants and why he’s upset. I do the same with my spouse, who’s calmed down. I help them hear each other and find a solution. My excessive calmness and logic save the moment.

It’s an opportunity to teach empathy to a growing mind and help my spouse step back to see the whole picture. I help our son express his feelings and remind my husband that what our son really wants is to spend time with us. If that means dinner isn’t ready as quickly or the kitchen gets messier, OK. In fact, that’s great because spending time with our son and helping him learn how to be human and how to cook is more important. I get to be the lighthouse I wish I’d had more of as a child, a safe place to be and feel anything and a guide for navigating Great Big Feelings. My spouse could learn a thing or two from me too.

Our unique skills are strong opposites of each other’s, shall we say, “quirks”—though we see ourselves as deficient, we both refute the notion there’s anything wrong with the other. We bring our lessons learned, challenges and life baggage to the parenting table just like everyone else. It’s tough for my husband, having ADHD, and for me, having ASD. But maybe in each other, we’ve found our perfect partner in parenting, with a person who turns our quirks into superpowers.