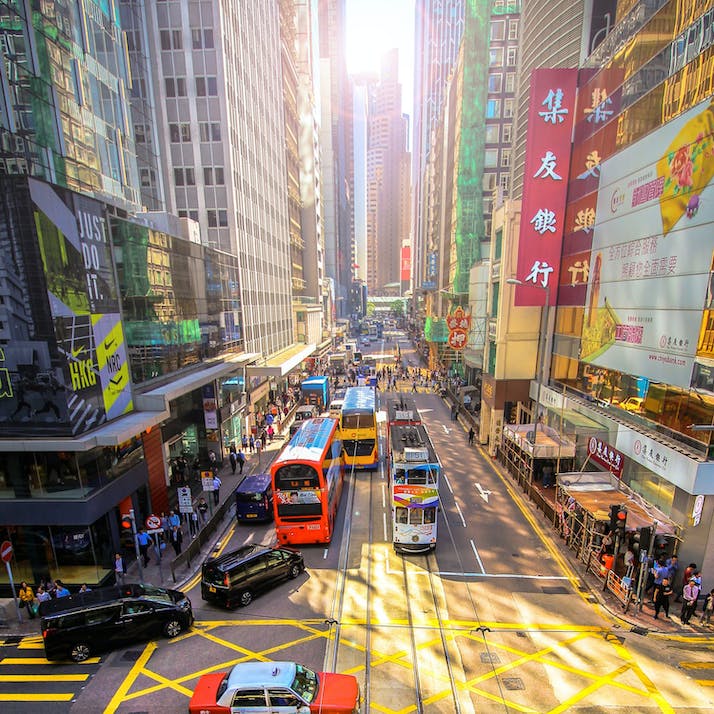 Think Big Tech Is a Danger in the U.S.? American Tech Is Far More Lethal Overseas.

A dispatch from Hong Kong: When foreign country laws interfere with American values, tech companies must be accountable and protect their employees.

If you found yourself waking up one morning as an 18th-century tradesman looking to make an unconscionable quicketh bucketh (observe my linguistically correct approach to the era’s slang), you’d have to embark on a perilous journey at sea, shoot cannons and actually risk death before being able to expand your business geographically. Today, however, all tech companies have to do is enable Stripe payments in a local currency and translate a few support articles to effectively growth-hack their way across the globe.

But just like in old colonial times, this often comes with dire consequences—especially for those who live in an area that Silicon Valley has identified as “high-growth potential.” I worked at one of the leading fundraising tech companies and, one morning, I got a literal and figurative wake-up call (a wake-up text if you want to be precise about it): “I’m in danger, please help.”

The company I worked for provides digital platforms that let users raise funds for special projects, which range from the creation of sassy, enamel pins to the development of technological solutions that could potentially solve the world’s environmental issues. It’s hugely popular. In Asian countries, hardware projects have especially taken off in recent years, prompting the company to open up for business in places like Singapore and Hong Kong. These places aren’t like the United States, however. Things work a little differently there when it comes to politics.

The social unrest in Hong Kong was at its peak when I worked at my company’s downtown Asian office. Some creators had just launched a project that criticized the city’s leadership and police force. But as it became hugely popular overnight, the creators hadn’t realized their verified ID names would be visible publicly on the website, alongside their controversial project. After an explosion of online speculation about their identities and whereabouts, one creator became so concerned for their safety that they considered committing suicide. A young Hong Konger who had expressed sympathy for the movement on Facebook had just disappeared at the border, and protestors were being arrested at scale, so this creator was certain of their impending doom.

As already mentioned, politics works a bit differently in Hong Kong than in the United States. Whereas a lot of American supporters saw the movement in Hong Kong as a means for an individual to express one’s discontentment with the government, the local authorities saw it as a form of domestic terrorism.

People tend to forget that it’s a Western right to protest—a right which isn’t exported as easily as Pop-Tarts. Just last year, a Singaporean man and his wife got detained for offenses under the public order act. Their crime? Wearing a t-shirt to a sports event calling for an end to the city-state’s death penalty.

Protesting is also dangerous in America, as we recently saw with Black Lives Matter activists getting maced in the face to make room for a presidential photo-op. That’s in the country where free speech is protected under the constitution. Imagine what it’s like in countries where protest or political dissent is forbidden by law, and you can get arrested for wearing a t-shirt. Should American companies profit by expanding to these countries and offering tools that make it extremely easy for people to break these (admittedly egregious) laws?

This is not about reshaping politics and protest rights. It’s about questioning the business of exporting Western culture into other geographic spaces that don’t operate on the same legal grounds. It’s also about taking responsibility.

“”
One creator became so concerned for their safety that they considered committing suicide.

Employee Lives Should Never Be in Danger

Back home in Hong Kong, the situation I faced kept snowballing and involved more and more people. Not only did the creators leave behind a big, fat digital footprint for the authorities to follow, but literally thousands of other users had supported the project by donating and submitting their personal information. After completion of the fundraising project, the creators (as is standard protocol) received a plain Excel file with everyone’s personal details—depending on your perspective, these were supporters of a good cause or advocates for domestic terrorism and separatism. I, for one, wouldn’t want to have my full name and address on a list that lingers inside a Hong Kong laptop.

The company I worked for took the issue seriously, but the c-suite’s romantic Western dreams of global democracy meant that the project wouldn’t just be deleted, as requested by the creator. During one of our crisis meetings, I remember an exec saying they thought the project was really cool, which sent shockwaves through my body because it showed how radically different we looked at this situation. While the creator and I thought of all the ways this could go horribly wrong, leadership at the company saw it as a great example of the site supporting democracy in Hong Kong, turning a user into an unwilling martyr. The reluctance to stop projects like these from endangering foreign users was seen by some as a testament to the company’s values, while others, including myself, saw it as reckless. I felt it wasn’t our place as Americans to enable users to do things that would change their lives forever—if not cut them short altogether.

The company ultimately took measures to protect the identity of the individual creator, but images of the project still circulate online, and that Excel file with thousands of names remains out there. A new sweeping national security law has since passed in Hong Kong, making any form of protest relating to this issue severely punishable, and nobody knows what has since happened to the people who implicated themselves by supporting this project.

So why does this happen? Surely, the incredibly talented people working in tech don’t want it to, right? As problematic as Facebook is, I’m pretty sure the people who work there didn’t foresee the genocide they helped enable in Myanmar. But the fact that they didn’t foresee how it could have happened is precisely the problem.

Companies Must Be Held Accountable Abroad

Westerners grow up with the notion that our democratic way of living is inherently superior to all other forms of governing and society. Heck, we can even invade a country if we want to bring them democracy and plant the seed of freedom. Unfortunately, history has taught us that when the white man shows up to a foreign harbor, it hardly ever turns out well for the local population. Tech companies have similarly turned into digital imperialists, taking whatever they want, and only offer hollow consolations and best intentions when shit hits the fan. Some might find this uncomfortable to hear, but there is this deeply-held belief, especially in Silicon Valley, that we are these brilliant people everyone can learn from, that wherever we show up with our slick software, we can change things for the better. Locals or foreign, yet-to-be-converted users, just don’t know it yet. When Airbnb first entered Europe, many did not foresee it leading to skyrocketing rents for residents, and pushing out low-income tenants who suddenly found themselves living in a building that would soon become an unregulated hotel.

Centuries ago, the Brits hooked Asian people on lucrative opium, ultimately leading to colonizing Hong Kong. It was a long and bloody battle, but at least we can hold history’s colonizers accountable by knocking over their statues and denouncing their actions today. Digital imperialism is much more invisible—all it takes is a few lines of code and a celebratory Slack message to learn a new country has been added to global operations. When things don’t work out in a certain market, tech companies quietly withdraw, but the damage to people’s lives who were misfortunate enough to come into contact with these unadapted services isn’t any less real.

I’m not saying tech companies don’t have the right to expand geographically. They just need to be held accountable. Whether this means disabling certain features and enabling others (switching off the ability to download a backers’ personal details and switching on increased anonymity in certain parts of the world) or integrally adapting the product to comply with local laws, human lives must be valued above profits. That seems like a basic tenet which we could hopefully all agree on.

So, if you work in tech, the next time you’re about to victoriously roll-out your expansion plans, please consider the impact your product might have on those foreign to the world from which you sip your Bevi and write your code.