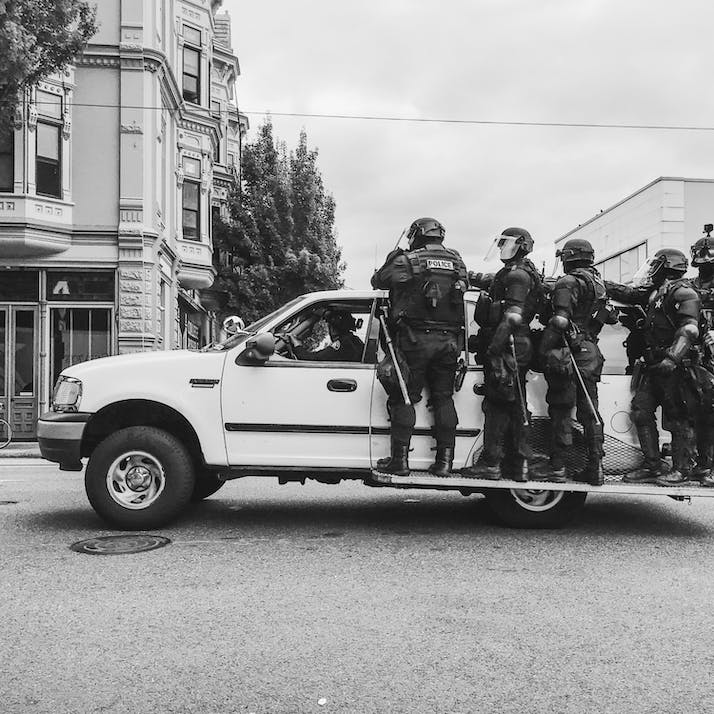 An Appeal to My Fellow Citizens of Portland: It's Time to Come Together

A young man who has met with both President Trump and Mayor Wheeler pens a passionate plea.

“The fault, dear Brutus, is not in our stars / But in ourselves”

To my fellow young citizens of Portland:

I am afraid. I am afraid we are losing touch with one another and our elders at a time when we need to cooperate against vast common threats. Our discord feeds the multidimensional violence that has blighted our city every night of the past three months and it affords natural disasters the capacity to cause us pain. Our state is aflame. Our city has filled with a dull, thick smoke. Some days we have breathed the vilest air in the world. Our firefighters will subdue the fires, God willing, and these conditions will abate. But they are unlikely to vanish. We must be prepared to live for months beneath a dark sky.

If ever the heavens have sent a signal for reconciliation on Earth, this must be it.

I feel moved to appeal to you, my contemporaries, and to myself, to detoxify and expand our discourse on politics and society. We ought to moderate our rhetoric and pursue mutual understanding through dialogue across cultural and ideological differences. At every step, we should seek to defuse, not incite; to empathize, not antagonize; to find points of engagement; and not to turn blindly away from one another.

I would like to offer some insights from my experience interacting with people from opposite sides of the political spectrum and people in a dreadful armed conflict. My experience is limited, but I humbly submit my learning for your consideration.

“”
I am afraid we are losing touch with one another at a time when we need to cooperate against vast common threats.

To Create Peace, First Recognize How Much You Have in Common With Your Opponent

I begin with war.

Over the past months I have arranged conversations between youth in two cities that in our lifetime were under the same flag of the same country, whose citizens subscribed to the same national identity, until violence obliterated this consensus and fed forces that wanted no memory of it. These forces, both in good faith and in bad, exploited the uncertainty and the divisions across a heterogeneous society to recruit and mobilize supporters.

For the security of all involved in the project, I will not name the country or cities in question. But suffice it that people drifted apart. Tensions escalated. And then someone fired shots. It does not matter who, for by then the sides had formed, and they were hurtling toward confrontation. Regular people became locked in the struggle. They developed fear and hatred for their attackers, and a loose geographic gradient in cultural preference became a frontline separating two new societies. My friends found themselves across the bloodshed from each other. Communication across the line, already weak enough to have allowed the crisis, all but died. People sought out those near them—those who shared in their pain and could confirm their version of anger. Those who disagreed with their new milieu left for the other side, if they could. In the ensuing years, more lives and homes fell to destruction. As the split hardened, so did the sullen silence between the cities.

I see parallels between us and these young people separated by war. I see a similar cognitive divide. I see a tendency to mistake views for truths. I see hostility to candid discussion. I see groupthink. I see vain and provocative rhetoric. I see a fear of error disguised as belligerent pride. I see a sense of tragic resentment that suffocates conversation.

At least, that is what I saw in our early meetings with people from these two foreign cities. In the months since, I have seen change. I have seen stigma overcome. I have seen a will to grow. The tragic resentment is still there. The loved ones they lost to each other’s fighters and shells have not returned. But now there is a will to honor them by achieving a just and lasting peace in their hometowns, even if it will require concessions. There is a will to set aside antagonisms and cooperate to end this war. They have rediscovered that there are good people on the other side after all. That is a fruit of restoring communication.

Therefore I urge the following: Let us restore communication among ourselves, immediately. Let us prevent ruinous polarization, enrich our public affairs, and stem the violence. We ought to temper our language in conversations and on social media. We should focus not on how much validation we are soliciting from those already in agreement with us, but how much needless dismay we are causing perfectly decent people whose world-views diverge from ours. Many such souls do exist; my interactions with Portlanders of various milieus have taught me so, as has the project I have described.

We as a generation must renounce the cancel culture that we have bred, for it is a sure path to deeper trouble. By ostracizing a person, we refuse an entire world. If people avoid exercising their constitutional right to express themselves, we risk tyranny in this city we celebrate as an apogee of liberal democracy. Let us not be warriors. Warriors are killers, a last resort. Their enlistment signals failure to respect a shared humanity. Instead, let us build understanding. Let us constructively engage with one another, our elders and the systems we find flawed. All of us, of diverse backgrounds and persuasions, must commit to this change for it to succeed. If we do, our joint effort will repair the eroded trust we need to heal our city.

“”
Let us restore communication among ourselves, immediately. Let us prevent ruinous polarization, enrich our public affairs, and stem the violence.

Our Polarizing Leaders Are Likewise More Similar Than They First Appear

Recently, a fervent dispute broke out between our president and our mayor. Each portrays the other as a villain and an existential threat to everything good in this country. I have seen this inflated language beguile people’s judgment and drive them to extremes. They begin viewing one of the two men as the savior, and the other as the devil.

Neither President Trump nor Mayor Wheeler deserves these appointments. I have met both in person. My meeting with President Trump was more accurately a reception, as I arrived at the White House with a large group, and he welcomed us in the East Room. His manner was genial, unscripted. Even the visitors who had avowed their animus toward him laughed at his jokes. He replied to our exclamations with wit. He said he was optimistic for our country, and that he was pleased to have us as compatriots. That morning, I perceived a man concerned about our nation. I saw and heard a person—not some savage creature, but a person. I likewise saw and heard a person when I took a seat at Mayor Wheeler’s conference table. He warmly greeted my small party, told us about his child our age, and dove into the issue we had come to tackle. The mayor sincerely wanted to help our city improve.

I hesitate to believe either President Trump or Mayor Wheeler may be more evil than the average human being. Each has certainly pursued plenty of problematic policies. I dislike their proclivity for exaggerated rhetoric. I can believe that each is any combination of short-sighted, obstinate, deluded and selfish. But neither has a monopoly on good or evil. As I have learned from my calls with youth from societies at war, virtue and sin are on both sides. We ought to ask ourselves what we would do in our leaders’ place—how we would act. I urge us to not overlook the flaws of whichever candidates, parties and movements we choose to identify with, nor the strengths of the other sides.

As We Search for Villains, We Have to Account for the Harm That We Inflict on Others

It is unlikely, fortunately, that Portland’s skirmishes will develop into full-blown armed conflict. The ideologies at odds are not grounded enough in popular psychology to elicit large-scale militancy, and democratic institutions are sufficiently firm and trusted that transitions of power should happen peacefully, thank God. Still, I urge us not to delay the work of restoring our community. Let us prevent further loss of communication, further stigmatization and further strife. Let us remember that we all are carved from the same piece of earth.

This task will not be straightforward. But we, the young people of Portland, are talented and capable. I look forward to fulfilling this mission together, all the more in the shadow of sickly orange skies.