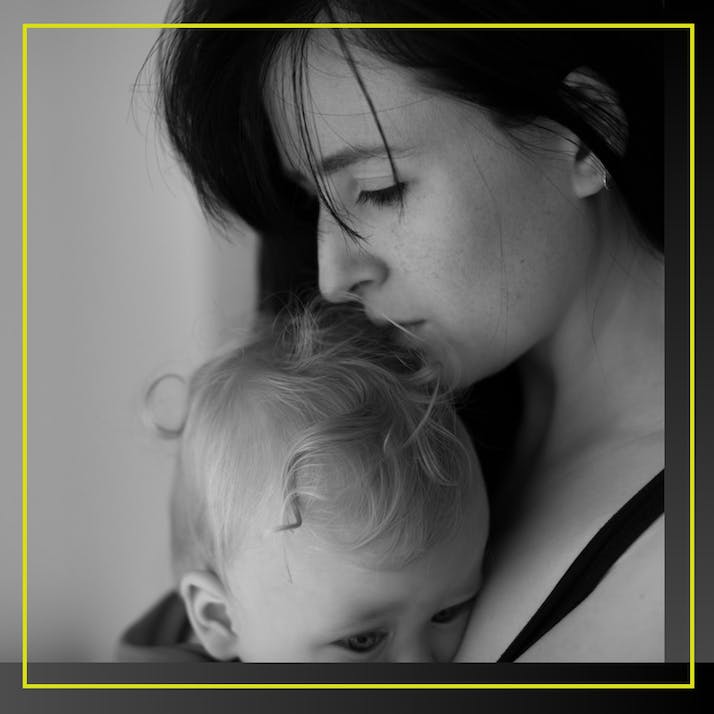 How My Anxiety Disorder Changed the Way I Raised My Children

For a long time, my crippling fears made me feel like a terrible mother. Then, I learned to find help.

My hands tightened around the steering wheel as rain pelted the windshield, my arms trembling from the fear clawing at my gut. I shifted the car into reverse and slowly backed out of a narrow parking space sandwiched between a concrete pole and a large SUV. My kids were arguing over a toy in the backseat, one of them screaming in anger. When I turned around to see what all the commotion was about, I heard a loud scraping sound and the crunch of my rearview mirror folding outward as the car dragged against the concrete pole.

"Mommy, what happened?" my daughter shouted from the backseat. I slammed on the brakes, and my mind went blank. A loud buzzing sound rang like a bell in my head, preventing me from answering her. I opened my mouth to speak, but the words caught in my throat as I fought to keep from vomiting.

Once home, I inspected the damage (the entire right side of the car was scraped and dented) and worried about what others would think when they saw it. I couldn't tell them (or my kids) what had really happened—that I had been in the throes of a panic attack.

Instead, I concocted a completely different version of the story—one that blamed the accident on thick sheets of rain and limited vision—because this was something that normal drivers would understand. But my husband knew the truth, and he wasn't mad. Instead, he hugged me and asked if I was OK.

“”
The phobias outweighed my guilt, burdening me with the shame of being less than an ideal mother and wife.

My Anxiety Was So Bad I Could Barely Drive

Even as a teenager, I never liked driving and dreaded the day I was old enough to get my license. While all my high school friends were drooling over fast cars and counting down the days until they could take their exams at the DMV, I was busy making excuses to avoid the entire process. My parents didn't understand my hesitancy because I hid my driving anxiety well, so they sent me to driver's school. Surprisingly, it wasn't as scary as I'd anticipated, and I did well with my lessons as long as I stuck to quiet roads and avoided major highways.

It wasn't until I had an accident years later while driving home one afternoon with a massive migraine that my childhood anxieties were triggered. All the old fears came back—my fear of dying, rejection, getting lost and being alone. My vehicle was totaled, and while I escaped unscathed, I never wanted to get behind the wheel of a car again. Of course, at the age of 22, this was not an option since I had to go to work, but I awoke with a new sense of dread each morning, knowing I had to drive.

Driving was only one of several phobias that plagued me. When my husband and I started a family, the challenges of motherhood amped up my anxiety. I felt far more vulnerable since I was responsible for keeping my children safe, which led to excessive worry, constant fatigue, frustration, irritability and guilt. I also feared that my disorder could be passed down to my children, either as a genetic predisposition or from the unhealthy environment of fear that I was raising them in.

My anxiety had reached a point where I could barely drive and could no longer enter unfamiliar buildings unless I was accompanied by someone else. Simple things such as grocery shopping, running to the drugstore, filling up the car with gas or flying on a plane were no longer options. I also feared the dark, tall heights and large crowds, all of which made me feel trapped.

My world was shrinking by the day and impacting how I raised my children.

I Felt Like I Was Letting My Kids Down

Fortunately, my kids were too young to realize how heavily I relied on my husband to run errands or shuttle everyone to extracurricular activities. He often called out of work to drive me to appointments, deal with repairmen at our house or take the kids to school functions. Although he worked two jobs, he handled my disability without complaint. I hated being dependent on him but also felt incapable of changing. The phobias outweighed my guilt, burdening me with the shame of being less than an ideal mother and wife.

Anxiety had not yet been diagnosed as a disorder during that time—people like me were considered weak, lazy, cowardly or immature. So I kept a mental list of excuses to hide my disability whenever I was called on to do something beyond my comfort zone. If the PTA board needed me to run off-campus errands for school programs, I told them I couldn't because I had a doctor's appointment. When the other moms invited me over with my children for playdates, I lied and said my car was in the repair shop. If the kids needed chaperones for field trips or a ride to a friend's house, I feigned a stomachache or told them I had already made other plans that day. I broke into a sweat and my heart raced at the thought of getting behind the wheel of a car and approaching a major highway. I tried to drive to the mall several times but was overcome with nausea and headaches. Eventually, I gave up.

Once my kids were old enough to see through my excuses (but still too young to have a driver's license), their frustration mounted, especially when they missed functions that I couldn’t drive them to. They asked why I never volunteered to carpool like the other mothers did or why I wouldn't attend extracurricular activities unless their father also participated. My oldest teen lashed out one day in anger when he was stranded in the rain at an outdoor event and I refused to pick him up. He accused me of being an inept mother who was selfish for expecting their father to run all the family errands. I let him think the worst rather than admit I struggled with crippling anxiety, because I didn't want him to see me as a weak or abnormal mom.

Over the years, my kids realized their mother was not like the other mothers they knew, and they stopped asking for my help. The upside was that my disorder forced them to become more independent; however, it also convinced them that they couldn’t rely on me for anything that involved driving or going to unfamiliar places. So I did other things to compensate for my disorder—I volunteered three days a week at my kids' school (it was one of a handful of places I felt safe going to), catered classroom parties, baked special homemade treats, spent countless hours helping with homework and school projects, allowed them to have their friends over as often as they wanted and rewarded their success in school with little gifts. Of course, I always dropped whatever I was doing to be their sounding board and their friend, but underneath it all, I still felt inadequate because I couldn't do the simple tasks that other mothers did so effortlessly for their children.

Everything changed when I met another mother my age who suffered from similar anxiety symptoms. I was amazed that she could laugh about her fear of driving or how she admitted going half a mile out of her way to avoid making a left turn at a busy intersection. She, too, had a ready list of excuses to avoid doing things outside of her comfort zone. Still, the difference between us was that she acknowledged her disability, referring to herself as a "perfectly imperfect" mother, and approached her disorder with a sense of humor. It also helped that more research was being done on anxiety disorders and celebrities took to social media to discuss mental illness openly. Stigmas were being shattered, making it safer for mothers like me to shed our shame and admit that it was OK to say that we were not OK.

“”
Over the years, my kids realized their mother was not like the other mothers they knew, and they stopped asking for my help.

In the beginning, I was too embarrassed to admit I needed help, but once I did, my doctor convinced me there was no shame in taking medication for my symptoms. She taught me different ways to decompress: deep breathing exercises, long walks, yoga, warm baths, playing in the yard with my dogs, listening to calming music—whatever else brought me peace. I also learned that it was OK to say no to the things I didn't want to do and communicated my feelings to my husband whenever I felt a panic attack coming on. He often talked me down from that frightening ledge before I fell.

The next step was to talk about my disorder with my adult kids. They were very supportive, and it explained so much to them. I couldn't do certain things expected of me as a mother, but they understood that I did my best to be there for them in every other way possible.

I see things differently now and have since learned how to give myself grace. An anxiety disorder is an illness and, like any illness, I have to take care of myself until I feel better. However, it doesn't define me or diminish my role as a parent.

Yes, motherhood is chaotic and messy at times, but I have both hands on the steering wheel now, ready to move forward, one mile at a time.