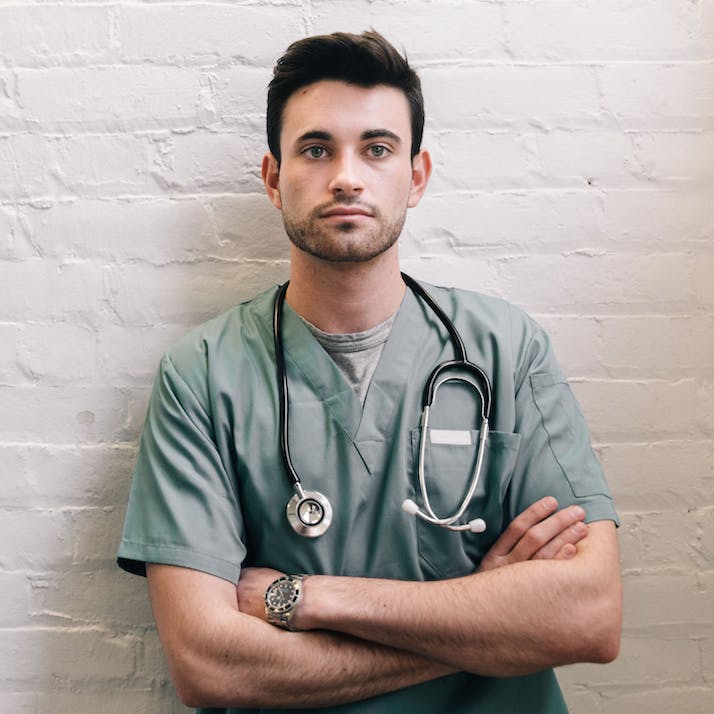 I Work in an ICU: Anti-Vaxxers, Let Me Be Honest With You

I have encountered too many patients and families unwilling to trust scientifcally established facts. It's tiring.

Like many before her, she said this while sitting in her hospital gown awaiting my evaluation. I asked her to clarify, as she could not possibly be implying that SARS-CoV-2 in its entirety was fiction. I adjusted her nasal cannula before I attempted to convince her of her diagnosis. I gave her an education on how viruses spread, explained the specificity and sensitivity of her two positive tests, showed images of her damaged lungs, and finally, as my Hail Mary pass, I expressed the confidence that I have in the billions of research dollars spent on COVID-19 diagnostics, treatment and vaccination development.

She replied that while she believes I'm not trying to coerce her into something harmful, I was the one who lacked understanding. She described that the pandemic was a ploy to control the middle and lower class and that there have been no “proven” cases of COVID-19 to date. Her rebuttal went on further to describe that unless she was present for all aspects of testing, including the creation of the nasopharyngeal swab, no one could prove to her that her test had not been tampered with and that COVID-19 was not a fallacy designed to control the public.

I could almost hear my eyes roll as I turned back around to face my middle-aged, otherwise healthy patient, who, later that week, did not survive the infection she did not believe existed.

“”
If treating patients throughout the COVID pandemic has taught me one thing, it’s that the human ego is far more powerful and dangerous than I ever imagined.

I Didn't Expect to Argue With Patients Over Facts

If treating patients throughout the COVID pandemic has taught me one thing, it’s that the human ego is far more powerful and dangerous than I ever imagined. When I began my post-graduation fellowship almost 10 years ago, I imagined spending my days utilizing my therapeutic expertise to heal physical ailments with rigid, research-based treatment protocol. I did not choose my profession to argue with people.

I am a textbook type-A personality, and the one thing that I always felt like I could rely on was science. The vast majority of people who believe in medicine and healthcare believe in science—or so I thought. Like many of my colleagues, I never imagined my practice to evolve into a politically charged discussion on "difference of opinions." I have spent the last several years in a multitude of settings—treating in the ICU, trauma floors, outpatient orthopedic clinics and even behavioral health units—and not one time did I have to vigorously defend clinically-based treatment strategies with every other patient. I also have never felt the need to "agree to disagree" with science-based facts.

My job has gone from providing best-practice clinical treatment to asking my patients if they have or have not followed basic, practical guidelines. I had incorrectly assumed that I wouldn't have these conversations daily. But the patients and their families who do not choose vaccination harbor such a desire to disagree and prove me incorrect, and the only logical explanation for these feelings is fear or an inflated ego. They must never admit defeat (no matter who they harm in the process).

Unfortunately, I have found the latter to be significantly more common. The phrase “losing faith in humanity” is trite; however, I have experienced this emotion more in the last two years than I ever thought possible.

I Do My Best to Counter the Misinformation I Hear

The familiar face in front of me asked about my family, my upcoming weekend plans and how quickly the year had passed. He was nervous. We had done this before. He knew from his many readmissions the next question that was coming: “Has your vaccination status changed?”

His adult daughter quickly answered that he would not be receiving the vaccine as “we don’t know what’s in it.” I was exhausted and could anticipate the blank stare I would receive as I explained that they had trusted all of the previous vaccines without asking about the contents and had never asked about the ingredients within the lengthy list of daily medications I had prescribed, which were just as important to protect your health.

The daughter made a light-hearted joke about not having her family be test subjects, unaware that her father would later be admitted for the last time when he contracted COVID as an unvaccinated elderly person with multiple comorbidities.

Nearby, another patient was having difficulty breathing, showing decreased vitals despite a steady increase of supplemental oxygen. When they called the code, I heard it in the hallway and immediately thought of the photos I had seen of his young children. After his first admittance, he was verbose in explaining that him refusing the vaccine was for religious reasons.

I vehemently countered his misinformation.

Aborted fetal tissue from the 1970s was originally used to create the cell lines involved in vaccine testing, meaning that the stem cells used for this testing didn't contain any tissue or cells from an aborted fetus. To further clarify, I explained that these stem cells were harvested from the fetal tissue of predetermined, planned abortions. Obtaining the stem cells was never the purpose of the abortion. I don't believe he ever understood what I was attempting to explain to him.

I can provide countless examples of ignorant beliefs that offer a false sense of security. I can almost predict what you will say as I see the UNVACCINATED/DECLINED highlighted in red on your form.

“My cousin had COVID and was fine.”

“It just hasn’t been tested enough; we don’t know the long-term effects.”

“People are dying from the side effects.”

“”
I have had many, many patients who are professional, functioning adults who truly believe that by refusing this vaccine, they are somehow proving something to someone.

People Believe They're Dying as Martyrs, but They Aren't

I don’t need to expound further on the fallacy of any of these arguments. Any literate being is able to decipher the difference between research and Facebook fearmongering and explain why these beliefs are fallacy.

There is, however, one argument against vaccination that is the most dangerous of all, the one that produces the die-hard us-versus-them mentality while subsequently producing the most calls to the coroner. It comes from the group of people who believe that by not taking the vaccine, you are somehow sticking it to the man, taking the "noble" high ground, not furthering the liberal agenda or being a good Christian, Republican, parent, etc. While I try my best to empathize with these beliefs, this is not the hill to die on.

At the end of my shift, you are dead and no one is better or worse. No one is discussing your moral compass. No one is making you out to be a hero. We just go home. I have had many, many patients who are professional, functioning adults who truly believe that by refusing this vaccine, they are somehow proving something to someone. I cannot stress enough that you are not. The person that is hurt by you not taking the vaccine is yourself and maybe a few close family members and friends. But no one remembers. Donald Trump does not come riding in to glorify what a great patriot you were, and your name doesn't go down in history as a legacy of courage.

You're dead, and that's it.

I have become part of the minority of healthcare workers that believe that I may be able to educate and change your mind by giving you the benefit of the doubt, empathizing and believing the majority of your hesitation comes from fear versus blind ignorance. But I am tired, and we are running out of time. I have lost count of the body bags that have been filled with people who died believing they were a martyr for a cause that does not exist, that they were being safe by awaiting further testing or that they were protected by whichever higher power they serve.

I understand the fear of the unknown, and I understand losing bodily autonomy due to a government mandate is controversial, but this cannot be it.

So I need to be honest with you: No one cares.