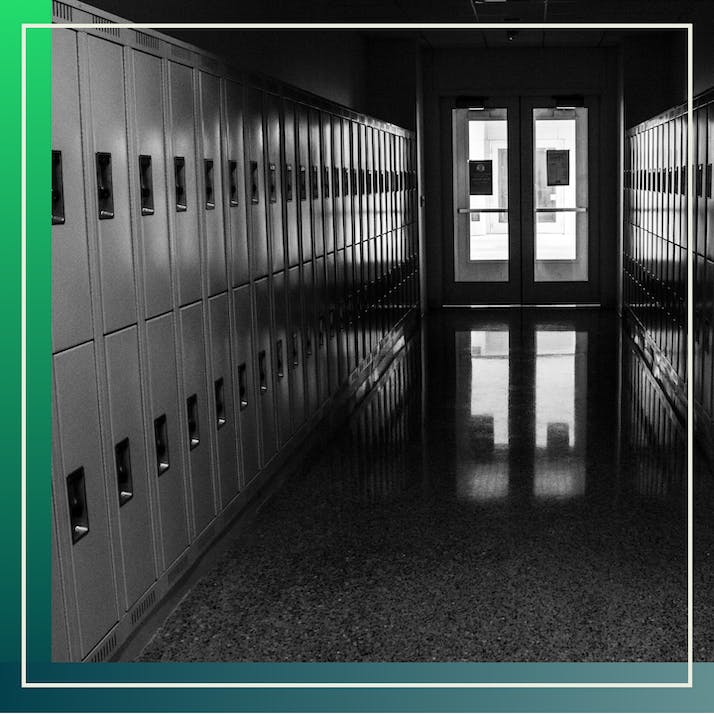 My students were traumatized, and I was left heartbroken that our institutions are failing us.

I started writing this before Buffalo, then I scrapped it and started again, and then Uvalde happened.

Here I am starting it over again.

I work at a high school, and I started working on this story soon after there was a shooting there. I began as details were still coming out, full of speculation and, above all else, worrying about the safety of my students.

The day followed as such.

The seniors had already left for the school year, and the juniors were preparing to step up, walking around the school in decorated crowns and wearing all black. The first few classes of the day were wonky because of end-of-year testing, so some of my students were coming by during lunch to say goodbye for the year.

An announcement came over the loudspeaker asking juniors to meet under a large tree on campus for a group picture commemorating their step up to their senior year. That’s when things went south.

Police Responded and Swarmed With a Violent Altercation

The classroom I was in was slightly underground and treated with hurricane-proof windows, so I didn’t hear any of the commotion until a substitute teacher came into my room.

“Hi, they told me to come here and hide,” she said. “They said we were under code red.”

Outside, where the students were taking their group picture, all chaos was breaking out. A white work van crashed into a tree outside the school, crushing a golf cart in the process. Before anyone could even check on the driver, he was on his way into the school, rushing past the principal and heading to the performing arts building.

“This is a code red. This is not a drill. Run,” my students told me, just as they were told.

By this point, cops were already on campus, trying to find the man, and he was rushing around the performing arts building—running, hiding or whatever he was doing. One of my students was even chased by him as he tried to get into the room my student was in.

It all came to a head when, after what cops described as a “violent altercation,” an off-duty officer shot the man in the performing arts hall, ending his life.

“”
An off-duty officer shot the man in the performing arts hall, ending his life.

The Perpetrator Was an Unarmed Black Man With Mental Health Issues

After the code red was lifted, police took to the scene to investigate the crime, and students were evacuated.

Before I even had all of the information, I was already conflicted. I’m generally the type to believe that lethal force is something that should be avoided at nearly all costs. But at the same time, my students—kids who I care incredibly deeply for—were in danger, and it almost felt like a mother bear instinct came over me.

My students were terrified. I hugged one of them. Another couldn’t stop crying. My morals about the importance of life and living felt as malleable as they’ve probably ever felt. Then, more information about what happened came out.

First things first: The trespasser was unarmed when he was killed at the hands of police, which, on its own, is already problematic. He was also a Black man, which, in the current American climate, brings an air of suspicion to anything cop-involved. Next, the man was checked into a hospital the night before for mental health concerns, where he was let out just a few hours later, around midnight.

Finally, the man was an alumnus of the school. He broke in and went straight to the performing arts building because that was familiar to him. It’s where he felt safe. When I got the full perspective, heard some of the man’s friends speak on his behalf and remembered the fear in my student’s eyes, I just laid down on my floor and cried.

“”
My students were terrified.

As I wrote before, I started writing this before Buffalo and before Uvalde. I was going to write about the mental health crisis in America and how we criminally underserve the people who need it most. I was going to highlight how consistently we fail our Black and brown citizens on the most basic levels.

Then, I saw the Buffalo shooter walk out in handcuffs. Then, I saw police sitting outside of a school while children were being murdered. And a man just seeking help came out in a body bag. It’s hard to describe what I feel, whether that be rage, sadness, hopelessness or some Frankenstein’s monster of the three.

At that moment, my students were fearing for their lives. Barricading doors, looking for weapons, stuffing themselves into lockers looking for safety. They were traumatized before they even knew what was happening around them.

I feared for my own safety and had that small nagging thought in the back of my head: “Is this real? Is this going to end up like Parkland, like Sandy Hook?” The fact that we have to even question our safety in some of the places that should be the absolute safest sits firmly in my mind.

Instead, we ended up with another cop killing an unarmed Black man and a population of students already exhausted from spending their formative years in COVID-19 starting their senior year fearing for their lives.