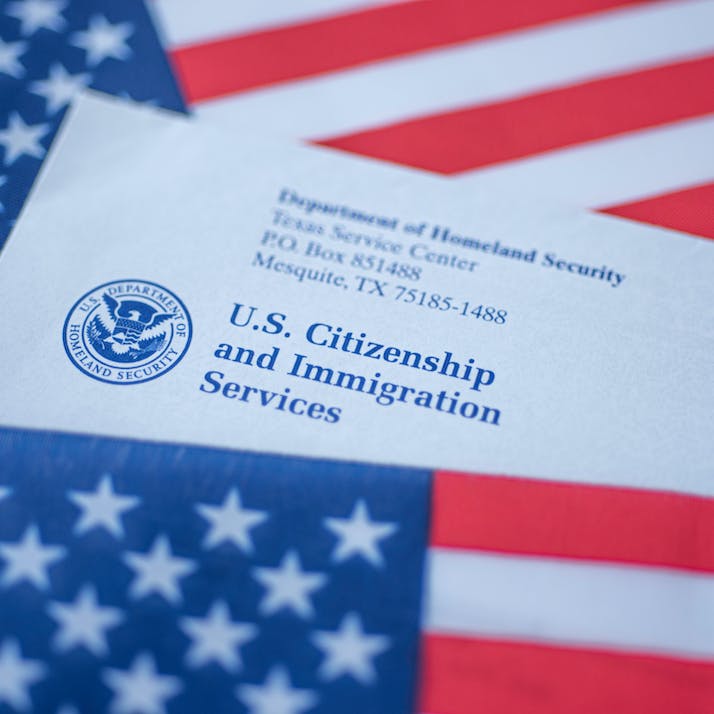 As a Foreign Citizen, I Always Believed in America—Until Now

A Dutch immigrant says that America must fight for its democracy now or else.

In the late 2000s, I traveled to the Federal Courthouse in New York City. It’s an ugly building, a tall, metallic expanse on a featureless square. Like all federal buildings after 9/11, you enter through metal detectors where jaded security folks rifle through your bag. But even their dour faces could not break my bubble of joy.

I was becoming an American citizen.

My parents wanted to watch the momentous occasion. Still Green Card holders, they were shuffled off to a viewing room while myself and about 100 other new Americans filed into a wood-paneled room. The judge, a woman with a classic Brooklyn accent, spoke solemnly about how this was her favorite part of her duty—swearing in new citizens. She read aloud each country represented in the room that day and asked each person to stand when their country was called.

It was a long list. New York, after all, has the highest concentration of different ethnicities, cultures and languages in America. As she called out 90 nations, from Algeria to Zaire, a person or two stood for each, honoring their roots while accepting a new path. I stood up when she called the Netherlands and locked eyes with another Dutch person standing several rows away. I did not anticipate how emotional I would be about this rite of passage with my fellow travelers, who went through countless hardships to land here. In each name was an unfathomable journey.

Being an Outsider Taught Me Everything I Know About American Culture

My own journey was not an arduous one. My father got a professorship and moved from the Netherlands to a small Midwestern town with his wife, three-year-old daughter and two dogs in tow. I grew up with Dutch and tidbits of Indonesian from my mother, the colonial past of my birth country seeping into my life through food, language and traditions.

I wore my Dutch roots with pride. When the children at school threw out the retort, “It’s a free country,” I wondered about my own country, which seemed even freer.

After all, everyone in this little town went to one church, and when I told one boy my family didn’t go to church, he told me God would break my legs. That didn’t happen in the Netherlands, where no one really talked about God, and my family rarely went to church. When the American national anthem played and everyone stood, I thought of my passport and my parents, and stayed seated. No one said a thing. I was just the foreign kid who didn’t quite know her way.

In college, I visited my mother’s country, Indonesia. It was under the rule of a technocratic dictatorship that filled the pockets of the wealthy at the expense of the poor. Indonesia was on good terms with many Western nations—after all, it had lumber, gold and cheap labor. But the media was a farce, political activists were silenced, and there was a perpetual sense of ennui over the rampant corruption, from street cops all the way up to the presidency.

In 1998, Indonesia’s streets exploded with anger and the aging dictator Suharto was deposed from power. I watched from afar, in awe of the revolution happening in my lifetime. Inspired by the removal of a dictator, I cued in on nearby Burma, where a postcolonial military junta kept Aung San Suu Kyi, the non-violent activist and spokeswoman for the resistance, under house arrest.

I volunteered to fell that dictatorship by advocating for economic sanctions from countries and corporations. In the process, I studied the machinations of power—the shameless hypocrisy and cruelty, hellbent only on maintaining power. To quell dissent, the Burmese junta closed all universities, forcing two generations of Burmese to lose access to a college education. And yet the Burmese people learned, studying smuggled magazines, reading by candlelight, tuning in to VOA broadcasts from neighboring Thailand. When Aung San Suu Kyi came to power, I rejoiced, only to mourn as she succumbed to divisive politics and ultimately the ethnic cleansing of Muslim Rohingyas.

I decided to get my citizenship when Obama won the 2008 primary.

He was the first politician I’d ever seen who spoke a language I understood, one of global citizenship and religious tolerance, and painted a picture of an America where a person who’d been raised with different languages, in different countries and with different values could feel right at home. I wanted to cast my first vote for him—not just the first Black president, but the first multicultural President. He was the first President who looked like me: young and brown. Since that first vote, I cast votes in every primary, state and local election I could. I spent Election Day getting out the vote, volunteering in whatever was the closest contested county. I even loved jury duty, and am continually baffled by the way Americans resort to tricks to get out of it.

And yet the concept of American exceptionalism always struck me as false. I came from nations that are also exceptional. The Netherlands is frank, honest, beautifully designed and comfortable. Indonesia has a majestic mix of beliefs that, at the best of times, are not only about tolerance but symbiosis, the language a mix of Arabic, Sanskrit and Malay—a testament to a culture that is adaptable and ebulliently welcoming.

Each country had also witnessed the rise of dictatorial powers and rapacious authoritarianism. My parents were children during World War II. My mother witnessed the tail end of Dutch colonial power, the mad sweep of Japan’s harsh rule and the exciting turbulence of independence. My father watched the Germans not only take over the nation, but also his family’s land, strategically located on the Netherlands’ northern coast. To me, history never felt like an inevitable march of progress, as outlined in my American textbooks, but an infinite loop of dark times and triumph, with times of peace and stability being the pauses between the music.

So, you could say, I was always waiting for the other shoe to drop.

“”
When the election results came in, I was one of the few people I knew who wasn’t surprised.

In 2015, I was visiting the Netherlands and found myself one evening with nothing to do. I checked what was playing at the local theater and noticed Look Who’s Back, a comedy that took Germany by storm. Its premise is that Hitler never died, but somehow time-traveled to the present day. At first, the Germans laugh: “Who is this clown, dressed as Hitler, trying so desperately to get our attention?” As that attention starts to come his way, many Germans are outraged: “Who is this clown, raising the specter of the worst of our history?” But some Germans are intrigued. He cuts through the clutter of politeness and tells it like it is! He’s saying the things they think, without apology. In the film, Hitler gains traction, gets an agent and finds himself back on the political stage, steamrolling through the status quo. The film ends on the eve of him being elected to rule a large democracy.

As the Trump campaign gained steam in 2016, I spoke of this film to everyone who would listen. Most of my friends were smugly confident that Clinton had it in the bag. Look at the poll numbers, they said, and quoted the latest Nate Silver data.

But I worried. I knew the data didn’t tell the whole story. When I did a September road trip through farm country in California, the ranches had billboard-sized Trump/Pence signs in their fields. I remembered the boy who told me God would break my legs, and the suppressed violence of middle America. I thought of the loops of history, how times of peace were temporary respites in a turbulent world. I thought of Look Who’s Back, and of a nightmare I had one night where red-hatted zombies slowly pulled my friends and me down into a stadium and torched it.

When the election results came in, I was one of the few people I knew who wasn’t surprised.

What did surprise me was the attempt at maintaining protocol. To me, the dictatorial tendencies of Trump were clear from the start. He lied. He was a hypocrite. He had a rabid fan base and acolytes who only wanted a taste of power. Why would Obama, who had experienced so much more of the world, politely hand power over to someone whose intentions were so clear? Why did Clinton acquiesce without a fight for the vote count? Why did we not use this moment to upend the primacy of the electoral college over the popular vote?

I was mystified as the country I believed in for at least a few years so easily handed itself over to a maniac. I thought of my friends in Indonesia, who took to the streets to fight for the system they desired, and the students in Burma who dreamt under the thumb of a dictatorship, reading five-year-old Time magazines in the night. It made me wonder why America, with so much pride in its democracy, could so willingly hand itself over to someone hellbent on destroying it.

My first protest after Trump’s inauguration was the 2017 Women’s March in Washington, D.C., an almost instantaneous organization of our anger. I wore all black, painted tears on my face and sported a sign that said “R.I.P. DEMOCRACY.” I meant it. It felt like the end of an American project built on hope, equality and progress.

A prominent publication asked to take a photo of me, but the photographer didn’t want the message from my sign in it. Instead, she asked me to hold a “Love Trumps Hate” sign instead, a positive message that felt, to me, out of reach. I wondered if I was being too extreme.

As America got pummeled with Trump’s executive orders of cruelty and intentional chaos, the Overton Window—the range of behavior considered acceptable in our society—was stretched further and further to the right. “Fascism” became a household word again, revived from the dregs of the Second World War. The whiplash of who was in and who was out at the White House trivialized serious roles meant to advise executive power, until it was all sycophants competing to maintain a favored status. The media was vilified, and the least political topics became lightning rods for partisan debate: public health, the Postal Service, pizza. The death of Black and brown people at the hands of police and the deportation of immigrants became specters of cruelty without remorse.

We have a president threatening a coup if he’s voted out of office as he, whack-a-mole, abuses democracy and public safety. The apparent stability and progress that Americans have invested in is teetering, and a global, historical view shows us that the moment of greatness we had could continue its freefall towards dictatorship

But I’m not a total pessimist. Trump has tried to dismantle institutions, pack federal seats with right-wing activists and demoralize the public, but the tendency towards progress that is part of the American mindset buoys me. America is a country that’s all about defying gravity. I can only hope that this November, America will prove me wrong.