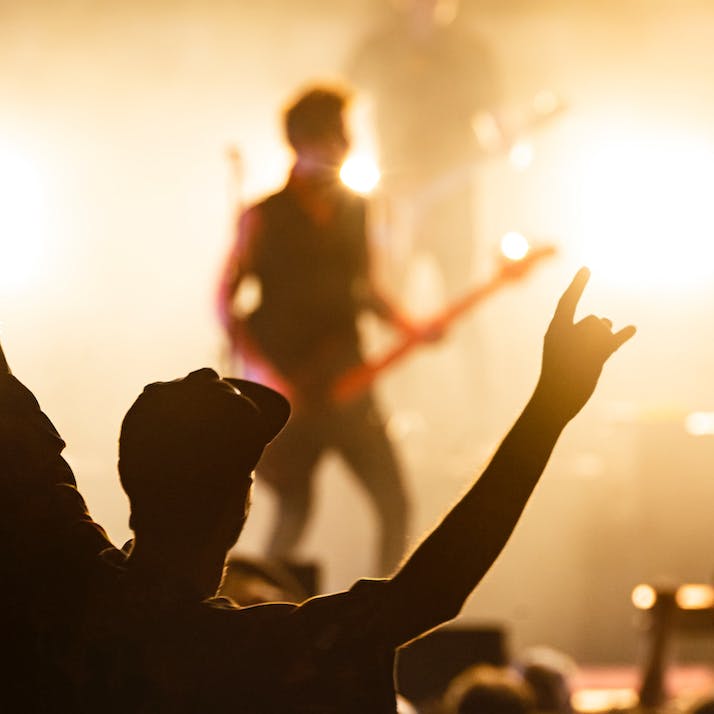 What You Learn When Your Band Becomes Famous

A rocker remembers the transcendent highs and unique experiences of touring with an up-and-coming all-girl band.

Rock 'n' roll is a secret society that everyone wants to taste but few have actually seen. For half my life, I was one of those few—first as a budding Annie Leibovitz, packed into a van with any band who would have me, and then, eventually, as part of an iconic all-girl band on the rise.

I started playing bass the day I joined my first band at 26. I played my first show in a packed bar two weeks later. Within a few years, I was playing in front of thousands of people, making out with idols at celebrity after-parties and doing drugs on weekday afternoons. Having been on the fringes of the world as the photographer, girlfriend or crew member, and having been so quickly catapulted to the eye of the storm, I was acutely aware of how my experience changed overnight.

“”
Within a few years, I was playing in front of thousands of people, making out with idols at celebrity after-parties and doing drugs on weekday afternoons.

Our Band's Rise Was Intoxicating

A lot of the assumptions you have about being in a band are true: You’re instantly admitted to a secret society and invited to all the parties; the clothes and drugs are free; people either want to be you or fuck you; and famous people want to be your friend. You and your bandmates are a pack, a gang, married by a blood bond that is forged on the road with over a thousand hours shared in small spaces. It’s the band against the world and all eyes on you.

Over my career, I’d been the only woman in my bands, but the power of the all-girl band was unlike all the others. It hit me the night of the first festival we played. We entered a dining hall packed with every other band on the bill, from the headliner to the opener, my bandmates and I in our signature short black dresses, gliding through with an air of untouchability. Heads turned and eyes devoured us. I was intoxicated by the power.

We didn’t play particularly well that day, but we were still that girl band. As we hung around backstage, a long-time crush of mine sauntered over and showered me with flirtation and praise. He was my first taste of feeling that anyone was “reachable.” Another Epic Dream Man in a Famous Band took me to a party at a Famous Director’s house. When we walked in the house, I noticed my date and the director himself were the only men amongst a room of French models. My former, less cool self, was convinced I was doomed to be ditched, but even as a known supermodel and indie actress made obvious passes at him, he stayed by my side, asking about life in my band. At one point, as the model tried to wedge her way between us, he leaned back and, straight to her face, proclaimed he wasn’t interested and whisked me away to the bathroom to make out. I played it cool on the outside, but my inner teenager was screaming.

“”
I was intoxicated by the power.

As Our Popularity Grew, So Did Superficial Connections

I’ve never been one to love parties, but when you’re the token rock star or cool kid amongst cool kids, all the teenage anxiety around social situations washes away because people want you there and want to talk to you. When you’re among other musicians and artists, you have an automatic connection and conversation starter. And when you’re among regular people, they want a taste of your cool by osmosis.

Soon after, famous authors, directors and TV executives wanted us to star in their videos or films. People I’d idolized watched us from the side of the stage or asked us to sing with them. When we played on late-night television shows, everyone from high school nemeses to distant cousins reached out, each sending congratulations and hoping to “hang out sometime.”

Every step of the way, I recalled those who had never spoken to me suddenly replying to every Instagram story, coming to every show or bragging about me to their friends. I noticed which acquaintances made a bigger play to get closer to me or to get on the list for shows.

While our band gained some fame and recognition, we never reached the top. From what exposure I did have, I gained a lot of compassion for how isolating life can be for people who become household names. The constant motion from one city to another with barely any time at home is ungrounding, but the constant “yes man” culture that follows can inflate your sense of self. The persistent dopamine high of adoration and applause becomes addictive. I felt fortunate to have been a late arrival and to have had the gift of perspective.

Years later, as the band dissolved and I returned to the outside, the invitations waned, the access diminished and only the true friendships stuck. But the bond between me and my bandmates continues, and the power I gained from taking the leap of faith and chasing my dream will stay with me forever. I wasn’t cool because of the clout or fame, but because I took the risk. That’s where the real power lies.

Earned or not, real or illusion, I wouldn’t trade any moment of it. The high was worth the comedown, and I’d do it all over again.